Read below for Mazonia Ice Fishing dates for 2017

Earlier in the week, I wasn't sure where I planned on drilling some holes but I did know that I was going to introduce Teddy (Lucidfishing.com) to ice fishing!

Around Thursday, Ed (FSA Custom Rods) asked if I wanted to head to Mazonia and fish some of the back pits in the North Unit. That took me all of about three seconds to say yes and the plan was set.

We were supposed to meet up at a lake in the North Unit at 7:00am before setting off on the grueling hike to pits we wanted to fish. As I pulled up, to the gate, I noticed a sign that made me say, "Uhmmmmmm" 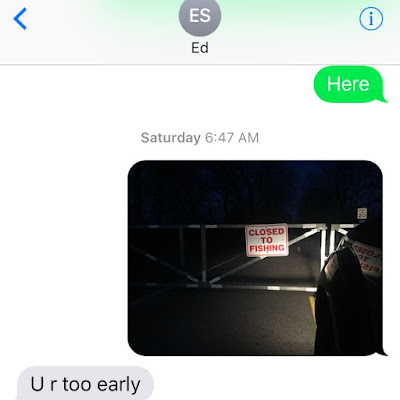 Clearly, by Ed's response, the plan was still on...I just got there too early.

He called me a few minutes later while I drove to a different entrance for the North Unit (which was also closed with the same sign) and said that the gates won't open till 7:00am

7:00am came...gate still locked. No sweat, the ranger probably just opened the other gate first and is surely on his way to open this one.

7:03am - stilllll locked. Phone rings...it's Teddy. He's at the gate I first stopped at and it's locked.

So, I google the main office's phone number, call, and ask if the North Unit is open to fishing yet.

Nope - not till February 16th.

Ed had either heard from a reliable source or read that Mazonia opened up after December 31st for ice fishing. Apparently, dates changed a bit this year due to some different hunting seasons.

So, with no other viable choice, we caravanned it to Monster Lake and started making our way to the area we decided to fish.

To help carry get everything out there, I got to test my new ice fishing sled!! 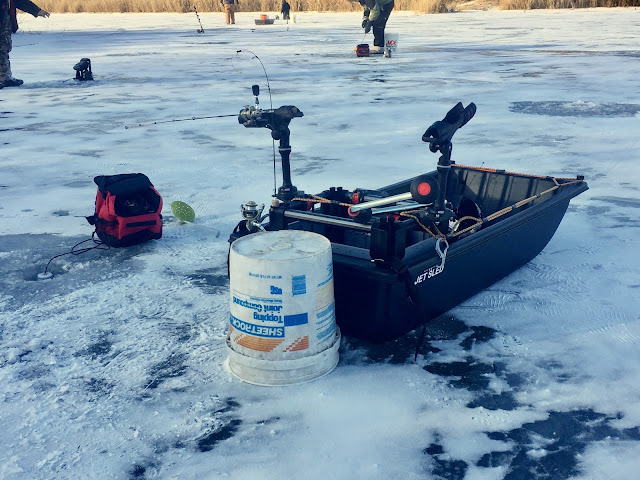 I rigged that puppy up with the Hobie H-Crate and a couple of Railblaza II rod holders!! It absolutely made dragging two augers, three flashers, a bunch of rods, and some other various stuff a lot easier than having to carry it. For $35, you can't beat it!!

The ice was plenty thick...at least six inches. It was also building throughout the day. The cracks and pops, as it did, were like thunder racing across the lake. Some you heard...others you felt as the ripped under your feet...

It took a little while to find some fish but we did. I believe Ed started it off with some crazy micro gill. Seriously, I didn't think that a fish that small could actually get its mouth around a hook any bigger than a size 28 dry fly hook!

Nonetheless, it was a fish! We all proceeded to start catching and figured out a pattern. Dark jig...suspended about midway in the water column...spikes or waxies didn't seem to matter much. I did better on waxies while Ed did better with spikes. Teddy, I think, did OK on either.

Speaking of Teddy, here is he is with his first ice fishing catch ever!! 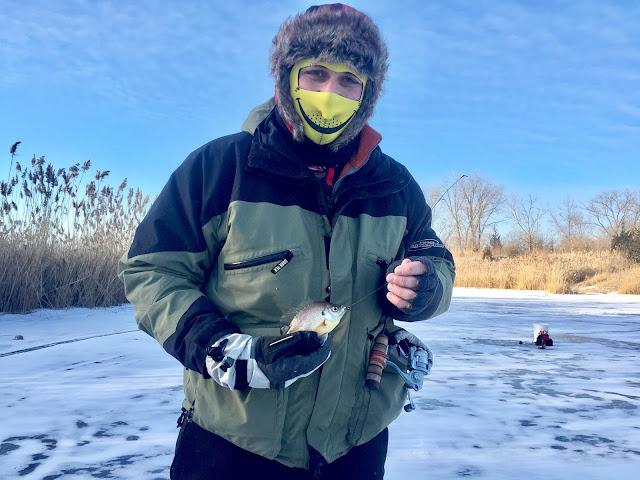 Good thing he had that FSA Custom Rod to handle that behemoth!!

All in all, I was able to bring home about eight eater gills. I don't typically keep fish but once a year, I don't mind a small amount for a good ole fashioned fish fry. And yes, the kitchen still smells like bluegill slime. HA!