A New Year - A New Thing

Truth be told, I have been neglecting the livin snot out of this thing!! Instagram has really been captivating me lately and is just so easy to share stuff there.

While I absolutely plan to continue with my Instagram page (link here), I have really been missing this blog. With that, my resolution this year is to get back in the saddle and start writing!!

Since it is a new year, I figured that a great place to start would be with my new way of feeling that tug that is so very much a drug...ICE FISHING!!

Yep, I've finally stopped fighting it and have gone all in on thing called ice fishing.

As of right now, I have three different rod/real combos - two of which are ultra lights and the other a light action. Ed over at FSA Custom Rods has a stick waiting for me as well!! In addition, I've purchased my first auger - a 6" Strikemaster Lazer, a sled, and even picked up a used Vexilar FL-8 flasher! Of course, I've picked up a handful of various ice jigs/lures as well.

So far, I have had about five outings and have been more and more drawn to it the more I do it. One of the the biggest, and absolute best, surprises so far has been how much my five year old (L1) loves it!

I told him about the whole idea a few weeks ago and he seemed strangely excited. I think that there was something really appealing to him about walking on the ice. As I started gathering enough stuff to actually get out there and try to catch a fish, an opportunity to get out presented itself so I took it - here's how it went down:

I didn't have an auger yet but as I was driving home from work one day, I saw a couple of guys ice fishing on the front yard pond. As soon as I walked in the door,  I told L1 that when they leave, we can go use the holes that they had drilled.  I don't think ten minutes had passed before I saw their car driving away. In record speed, we got all of our winter clothes on and we were off!

When we got to the pond, I walked out on the ice to make sure it was safe before letting L1 out there. As soon as I said that it was safe, and started walking back to get him, he took his first step on to the ice....and was on his butt just as quickly. I couldn't help but laugh which meant he laughed.

I helped him up and we shuffled our feet to the first hole that we wanted to try...we never left that hole. Over the course of the next half hour, we hooked and landed twenty seven little bluegills!! In all reality, he caught the majority of them and I had a blast watching him and the Vexilar. Without actually fishing, I got to coach him and feel the anticipation of the bite when we would see them show up on the finder. So much fun!!


As we walked home from the pond, he couldn't wait to tell Mommy how many fish we caught! We opened the door, and he yelled, "Mommy! We caught like one trillion fish!!!" Pure pure excitement!!

After that outing, I hit the pond a couple more times (just for short little fixes) and even met up with a fishing buddy who has been into this ice fishing thing for waaaaay longer than I! We definitely put a whoopin on the fish that day as well including a few nicer ones! 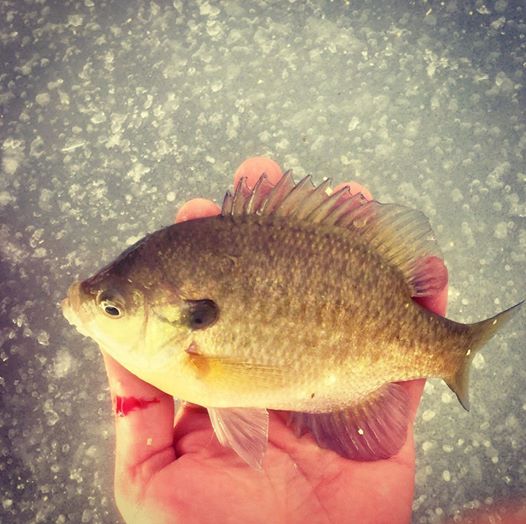 On Saturday, my auger finally came! L1 and I were both really excited to give it a try so we headed back to the pond. We drilled a few holes and got a few fish but they just weren't nearly as active as they were the previous outing. With the sun being so bright instead of cloudy like the last time, I figured the fish were probably a bit deeper so I popped a hole in one of the deeper spots on the pond.

Within a minute, it was clear that this was the right move. After a number of bluegills, it slowed down a bit. I could see that there were still fish hugging the bottom but they just didn't want to come up. L1was bouncing the bottom as I was watching the flasher when, finally, a big red mark quickly made it's way on to the screen. L1 teased the fish up a bit higher in the water column and then just let the tiny jig sit still. After what felt like an eternity of waiting, the rod tip indicator went down and he set the hook. Instantly, I knew it was a bigger fish than we had been catching. The little two foot long ultra light rod was bent over from tip to handle and the drag was making noise. I could see flashes of light through the ice and I had a feeling that he hooked a bass.

About a minute later, the fish came through the hole and L1's face was stunned, beyond excited, and told you every emotion he was feeling!! 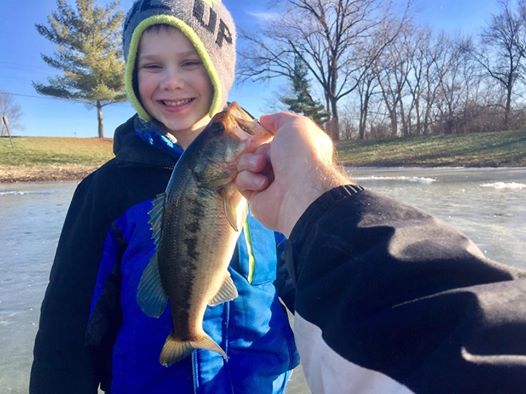 I can't describe how excited I was watching him...

I have no clue why I put this off for so long...these times have been beyond words!
By BrookfieldAngler
Email ThisBlogThis!Share to TwitterShare to FacebookShare to Pinterest