Back to Mazonia State Fish and Wildlife Center...

If you haven't guessed, you'll be hearing a lot about this place from me this year. It's close to home, a new type of fishing to me, and it has the potential for some massive bass (by Illinois standards at least).

On top of that, I have teamed up with Hobie and Quest Watersports on a program called First Cast. The program allows someone to get out with myself, or another local Hobie Fishing Team member, and spend a good chunk of the day on the water in a Hobie kayak to get a real life feel and understanding of what the Hobie life is all about. The money spent on the outing can be directly applied to a Hobie kayak of their choice if they ultimately end up buying one.  It's a very cool program that has taken a lot of the country by storm - we're just bringing it a bit closer!

Since I really want to get people on fish, I am really trying to understand these lakes as much as possible. With over 200 lakes to choose from in the park, I have been trying to find two or three that offer easy access and some reliable fishing. That brings us back around to my original point that I will be spending quite a bit of time this year.

On to Sunday's results...

A nasty cold front that brought quite a bit of rain, and some cold temps, to the area had me scrambling in terms of my game plan. I was thinking that the water would be in the low 60's since it was in the upper 50's a week ago. I quickly realized that I was absolutely wrong. As a matter of fact, the highest temps that I recorded on two different lakes was 56.

The first lake I tried out was a little no name lake/pond that I have been wanting to check out. It has pretty easy access and I was able to pull out a bass from shore on a previous scouting day. Once we - I had friend and fellow Hobie Fishing team member, Teddy, with me - launched, I was stunned at how clear the water was. At the very minimum, there was seven feet of visibility.


It only took us a couple of hours to work the entire lake and while we put some fish in the boat, the size was minimal and we simply didn't see a lot of life. My theory is that there just aren't enough nutrients in the water to support a decent base of fish. Of course, the possibility that I just suck at clear water bass fishing hasn't completely escaped me so shhhhhhh!

Rather than spending any more time at this lake, we moved down the road a bit to another lake that has a little feeder creek running into it. With the rains and wind, visibility was less than a foot but I know that there are good numbers of bass in here - and the potential for some real size. The water temps were the same on this much larger and much muddier lake (55 to 56 degrees).

Since the water was so dirty, I knew I wanted a presentation that would give off some good vibrations and have a good sized profile. I debated for a minute between a chatter bait or a spinner before settling on a 1/2 oz Biovex Stangun with a Fishing Physics Grub as a trailer. Once that decision was made, I contemplated between black (which seemed like the obvious choice) or white/chartreuse. Not being someone who always chooses the most obvious options, I went with white.

I pushed off from the little gravel boat ramp and immediately saw a nice opening in some reeds and put my lure right in the middle of it. As I started my retrieve, I let the lure fall down the steep slope and as it bounced off of various rocks and pieces of wood, I lost feeling with the bait sooner than I had anticipated so I set the hook. Wouldn't you know it, first fish on the first cast! 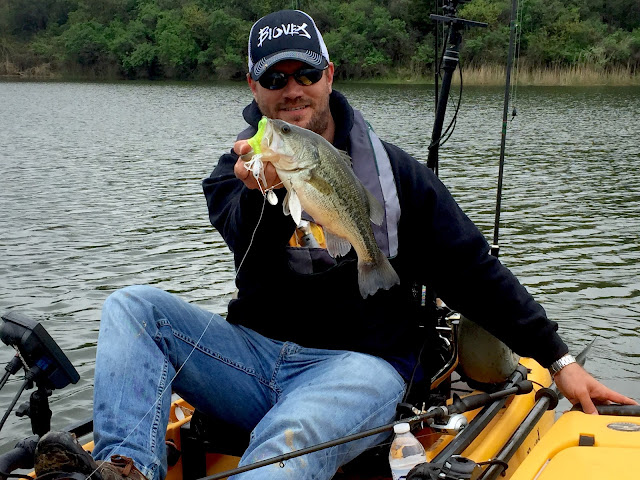 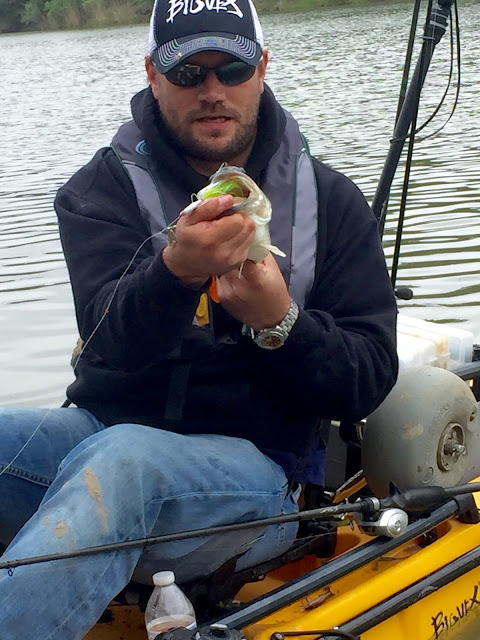 She had a plump belly on her which has me even more excited for the spawn!

We continued working this area of the lake and I was able to put a couple of smaller males on the board as well before moving towards the creek in flow. Water here was even dirtier but I stuck with the same presentation that has been working - 8 to 12 feet of water and bounce that noisy spinner off the bottom really slowly. By the way, I think that this is when the Fishing Physics Stuff really shines...the natural water based scent lingers in the same area for so long, instead of floating to the surface like oil baits, that it adds a bit of a scent trail. That's my theory at least.

I had another couple of fish come off before getting them on board but the action was consistent. As I started moving to the other side of the lake, I felt a great thump after the bait hit a log and as soon as I set the hook, I knew it was a decent fish. I played her a bit more carefully than usual but patience paid off as she hit the net. 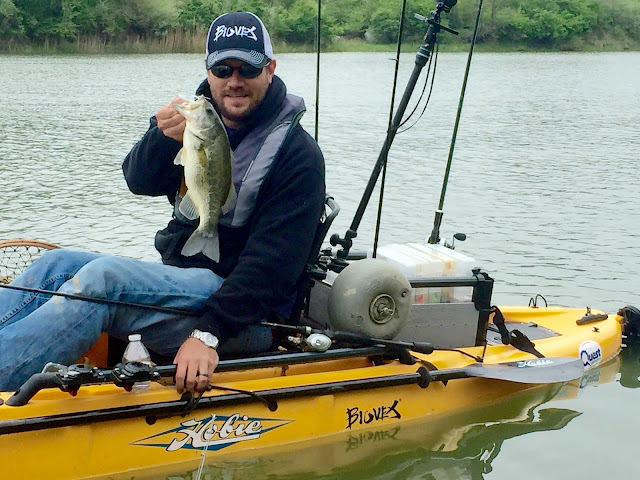 After snapping this picture for me, Teddy realized that he didn't have an spinners with him - it was first outing of the year so he wasn't fully organized yet - so I gave him one of mine. I know...I'm such a nice friend.

He stuck to the same approach and it wasn't long until I heard him from across the lake, "Fish on!!" 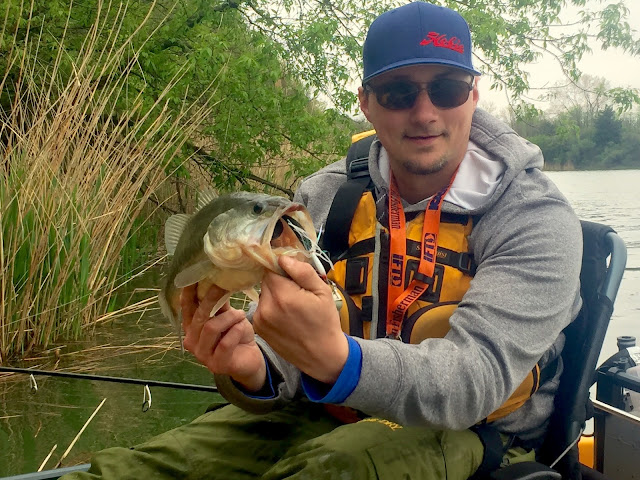 It's hard to tell from the above pic, but that was the biggest fish of the day. Look at the belly on her!

I, on the other hand, decided to switch things up a bit and play with the Ned Rig. In case you haven't heard of it, it's a finesse technique that is known to put numbers in the boat. If you want to learn more about it, you can click here.

I have been kind of excited to give this a shot; so excited in fact that I had Ed from FSA Custom Rods build me a rod specifically for the technique. As the "how to's" out there will tell you to do, I made a cast and let the bait sloooooowwwllllllllllyyyyyyy fall to the bottom on completely slack line. With the wind, this was a bit painful for my impatient mind but I did what I was supposed to. After I was kind of sure that it had hit the bottom, I started reeling in my slack and just as I started to feel something, the line got heavy so I started reeling faster instead of setting the hook - talk about a hard thing to accomplish! To my disbelief, there was actually a fish on the end of the line.

I spent the next 15 minutes or so playing around with it and while I had a few more bites, I wasn't able to refrain from snap setting the hook so I didn't land any of them. Why I was able to do it right the first time but not again after that is beyond me, but with some practice, I can actually see this technique paying off (the ned rig part...not the power hook set part).

After that, it was time to call it a day. The wind had picked up and the temps were dropping even faster which meant that the weathermen were right for a change...storms were coming.