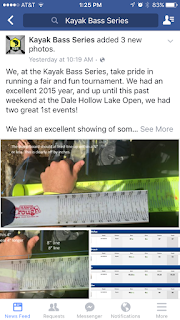 If you are a kayak angler, I am pretty sure you have heard about the cheating scandal that has rocked our little world. If you haven't, here's a link to get you up to speed on the cheater and how he was caught by the folks at the Kayak Bass Series.

As a kayak tournament angler myself, and as a past tournament director, I have read and discussed so many thoughts and opinions on this and how it affects the kayak community. A friend of mine had mentioned how crappy it is because of his view of the kayak angler community's welcoming, honest, and humble nature. When he talks with random strangers about kayak fishing, this is the point he drives home the most. Like so many of us, we don't care what kind of kayak you have...we just dig kayak fishing and enjoy talking to people about it.

I think that Chris Payne (awesome kayak fisherman and even better writer that has an opinion on everything about the sport and isn't afraid to share it) really summed it up perfectly in his post about this unfortunate event.  Before continuing reading this post, I highly suggest giving his a read.

Now that you are back, I'd like to echo his sentiments. I do not believe that this incident is limited to the kayak community nor will it tarnish our reputation. At the most, this will be a tiny black speck on an otherwise clean blanket.

What really concerns me is how this might hurt the growing movement of catch, photo, release tournaments in all types of fishing. There are shore based tournaments, online tournaments, boat tournaments, and I'm sure there's other kinds that I haven't even heard of that use a system that so largely relies on the honesty of the participants. The bigger the stakes/prizes/money are, the more that I feel like people are going to cheat.

These types of tournaments - outside of the ease of cheating - are a tremendous step in the right direction for the tournament fishing world. There is no doubt that getting a fish back into the water as quickly as possible is best for the health of the fish. Even with today's modern live-wells on boats and even kayaks, there is no substitute for the fish's home body of water.

Don't get me wrong...there have been plenty of cheaters caught in the boat based world of tournament angling as well but having a fish right there for all the judges to see makes it a lot easier to catch someone trying to cheat. Many of these events require an inspection of the boat's live-wells before they launch just to make sure that the angler doesn't already have a fish or five in the boat. I just feel that it's a bit harder to get away with it in these tournaments.

With that, my concern with this latest scandal is how potential sponsors and future "paper tournament" anglers will react to this. Will this slow the momentum of bigger sponsors who are ponying up huge dollar figures that, up until extremely recently, were unheard of in all but the largest fishing tournament stages out there? Will it give them pause when they hear about stuff like this?

As an example, the cheater had used his cheating method to win the November portion of the Angler Combat Series and won $1,000. The organizers of that series, in light of recent news, stripped the cheater of his title and gave the prize money to the rightful winner. The problem with that is that $1,000 had already been paid out to the cheater. I am guessing it will be a long long time - if ever - before they recoup that money so they are in the red for a decent chunk of change. Now imagine if this happened at the KBF open where the winner was awarded a staggering amount of money (over $30,000). If I am a potential sponsor for one of these CPR based tournaments, I'm not going to be too upset over a few hundred dollars in cash or gear. What about $1,000....$5,000....$20,000?? The folks at Angler Combat absolutely did the right thing but at what point does it simply get too expensive to do the right thing?

How do you make it harder to cheat in these things and how does the CPR tournament world of planners ensure major sponsors that a potential cheater won't get caught?

What do you think? Does this hurt the future of CPR based tournaments or will it take more than one bad person to slow the momentum of our growing sport?