This past Saturday, my good friend Randy with Predator-Pursuit.com, sent me the greatest report he's ever given me. Him and his clients put 9 muskies in the boat on a single day! It was crazy! Occasionally there are those 2 and 3 fish days...maybe even 4, but this is musky fishing we are talking about...you know...the "fish of ten thousand casts"?

So when he showed me 9 muskies caught on Saturday, I told him to keep the boat gassed up - I'll see you in the morning!

More often than not, however, a stellar day on Saturday means dead seas on Sunday. Still, hopes were high that the pattern would hold up for two days in a row.

Randy started out throwing some shallow jerk baits since that what they were hitting on Saturday. The baits would dive and suspend about 4 feet below the surface. I really wanted to get a musky over 40" on the new Biovex Joint Bait 142 but it's a surface lure. To overcome this, I removed the stock hooks and split rings. I replaced them with big Gamakatsu 5/0 trebles and heavy split rings. This was enough to get the bait down to about 4' with a 10 count. While it worked out just how I hoped, the muskies didn't seem to be rising that high in the water column. The bait balls were also quite a bit lower in the water as well.

Getting tired of waiting for the fish to come to me, I decided to go to the fish. In order to accomplish this, I pulled the hooks and split rings from the joint bait and added them to the Biovex Amp Deep Runner. By itself, it normally dives to about 10' to 12' of water but then floats to the surface on the pause.

Since I needed the bait to suspend right in the musky's face, the heavy hooks and split rings were the trick to keeping it where it stopped. The only other modification I made was adding a couple of dots on each side of the bait since they were keying in on shad.

It couldn't have been more than my 10th cast with this trial presentation when I went to jerk the lure forward after a short pause and felt it get nicked by a toothy critter. Had I waited a half a second more, it would have been fish on.

Still, it gave me hope that the presentation would actually work. Targeting big muskies with some modified bass crank bait didn't seem like it would be feasible at first but signs were looking up.

About ten minutes later, I had slowed my pause down a bit to give the fish a chance to bite down when I felt the slightest tick resonate through the rod tip. I went to set the hook and it was game on.

It took a few minutes but we got the fish in to the net. It was going to be close but I may have just hit my 40" musky goal on a Biovex crankbait. 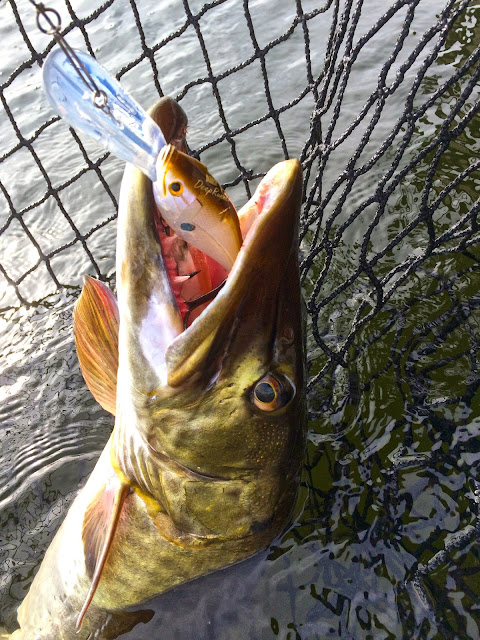 After getting the hooks out, we put it on the bump board and sure enough...we nailed it! 40.25" 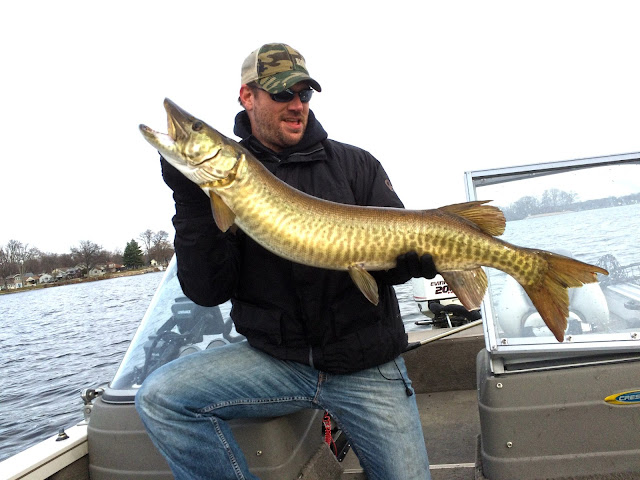 After we watched her swim away, we both duplicated the same presentation. Over the next 6 hours, we put 5 more muskies in the boat. Randy definitely had the hot hand for a while and put 4 in the net including a pig 46" musky. 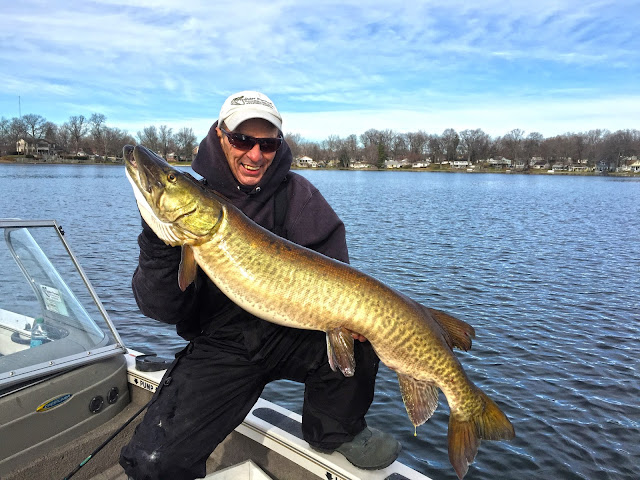 I, on the other hand, got the last hurrah with a stellar 41 incher right at the very end! 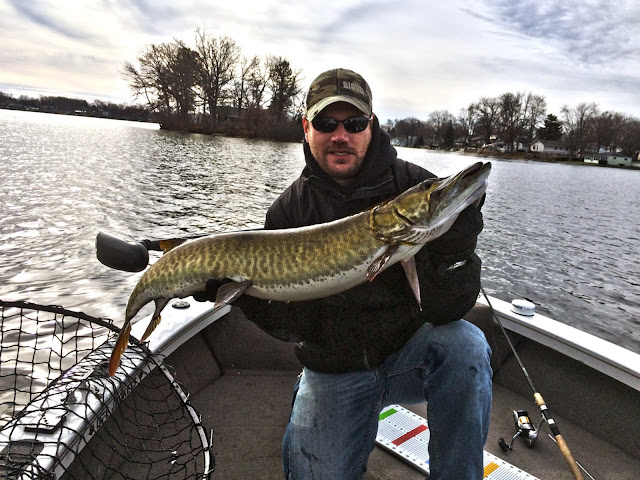 The day was cold and windy but still a blast.  It also turns out that we actually beat Randy's and mine record when we fish together. Until this day, the most we had put in the boat in a single day was 5 muskies - that was with 3 of us fishing. On this day, we did 6 between the 2 of us!

We also missed one on a sucker and had 3 other follows.

I absolutely love these fish!
By BrookfieldAngler
Email ThisBlogThis!Share to TwitterShare to FacebookShare to Pinterest