So my oldest boy Landon - who is 4 years old now - has really been getting excited about fishing this year. At least once or twice a week, we'll head across the street to the local pond for a little bit. He has progressed quite quickly! He casts by himself, fights the fish, and reels them in by himself.

Up until now, the catch has been mostly bluegill with the occasional small bass for him.

A few weeks back, there was another neighborhood kid fishing and he landed a shockingly huge catfish with a hot dog. Since then Landon had been wanting to catch one.  We bought multiple packs of hot dogs and have tried to catch one almost every time we've been out but the bait usually gets nipped off by little bluegill. The last time out, it dawned on me that these cats are getting so big in this pond because they are eating the highly over populated gills.

Yesterday, with that in mind, we set off to the pond with his super hero fishing rod in one hand and the big rod for catfish. It took him all of two minutes to catch our bait - a little four inch gill.

We rigged it up to a big circle hook, cast the whole set up into a hole in the weeds, and let it sit while we wrangled some more bluegill. A little while later, I caught the slip bobber shooting beneath the surface so Landon dropped his little rod and we ran over the big pole. I set the hook and handed it over to Landon so he could reel it in. He was so excited and so was I! The plan to use the gills workout perfectly. He was struggling to get the fish through all the weeds so I helped him hold the rod while he feverishly reeled it in.

I was stunned when I saw what it was and was instantly more excited about our tiny little pond. 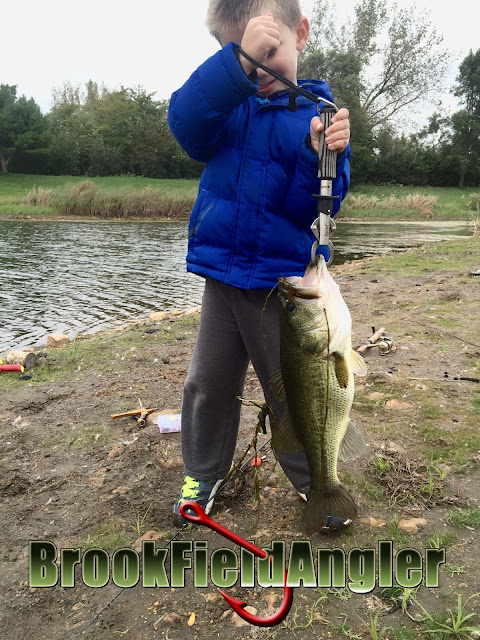 Now, I can pull out some bass at will from that little pond but the biggest I have seen so far are some run of the mill twelve to fourteen inchers. They are fun for those times when I have a few minutes to kill or for Landon to catch with his little fishing pole.

Leave it to my little buddy to show me that there is at least one five pounder in there!!

The amazing thing about this catch - besides its size - is that the hook never pierced the fish. The bass had the bluegill half swallowed and refused to let go of it during the entire fight. I worked carefully to remove the hook from bluegill only and we sent the big girl away with her well deserved meal!

Still hoping for one of the giant catfish, we immediately set out to catch another bluegill for bait and had one very quickly.

We got it rigged up, cast it the same spot, and went back to...Well Landon was pretty excited still. He was fascinated with the pliers and the Lucid Fishing Grips so we were playing with those and picking everything that he found up with them.

A few minutes had gone by when I heard a splash behind me. As I turned around, our fishing pole was gone and there was a big ripple in the water. We ran over there and I reached my hands in the water to get the pole. I handed it Landon and it was everything he could do not to let go. I grabbed the foregrip to help him hold on and he started reeling. It didn't take long for me to realize that Landon finally got his giant catfish. 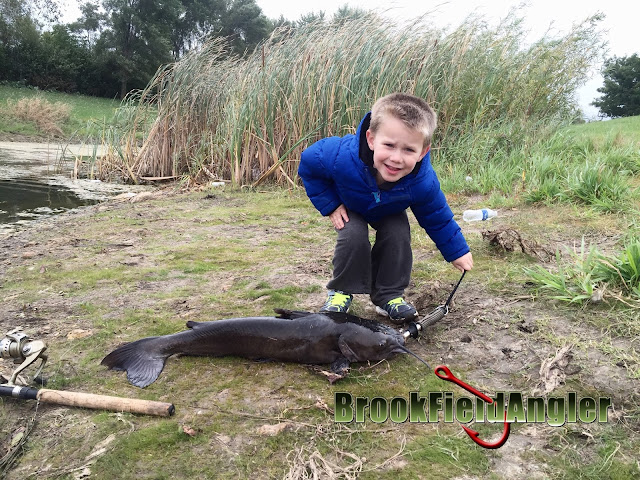