Smallmouth are thriving in the Des Plaines River

Man it's been a long time since I've hit the Des Plaines with a set of waders!! For whatever reason, I had the urge to suit up and see how the smallmouth were doing and I was not disappointed.

Time was short but I had some goals I wanted to make happen including some good video and some product testing. Most importantly, I wanted to catch a few fish!!

After I was done, I felt great because everything had gone exactly how I thought. It's been a while since I have been able to pull that off in terms of fishing.

My first fish came on a white swim jig with a chartreuse Fishing Physics Grub in their minnow soak. The fish came right off the slow side of a seam and hit hard. I was extremely happy to see a 16" smallmouth at the end of the line. I took a few pictures and then a release video. 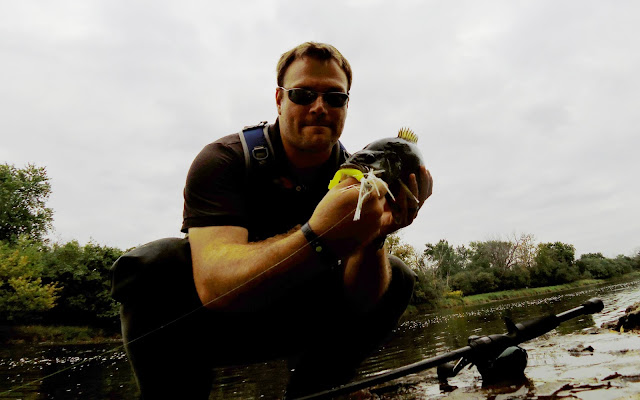 After I released her, I moved down stream a bit as the sun was going down pretty fast and I had a certain spot I wanted to be in for my quest of a few topwater smallies.

As I walked downstream, it dawned on me that my camera might still be set up on timelapse mode for a different video project. Sure enough it was - which meant I didn't get my release shot. Oh well.

As I approached my target area, I could see the smallies starting to pop the surface so I quickly tied on the Biovex Joint Bait 110 and started casting.

It took all of three casts when I saw a fish rise but miss, then come back at it hard for another miss. (When you watch the video, you'll see me miss a fish and then look back at the camera to say, "That thing came at it twice!!")

I only had another half hour to make it back to the truck before the gates to the access spot were closed so I got back to casting.

A few minutes later, I made a cast just past a shallow ridge in the middle of the river and started bringing it over to the deeper channel when I got slammed! The fish tail walked a couple of times and I was trying to reel as fast as I could to get pressure on the fish and keep it low in the water. I really didn't think it was a very big fish at first but once I got it closer, it finally started pulling pretty hard.

I was using my Phenix X-10 Crankbait rod that FSA Customs had built for me earlier this year and I love how soft the tip is while having a really nice backbone to control a fish. In the video below, you can see exactly where that backbone comes in!

I got the fish landed and while it certainly wasn't the biggest smallie I've caught, it was a great 15" river fish with a ton of power. These fish really never stop fighting - they are warriors.


After I got that fish released, I checked the time and had to start making my way back to the truck. I was walking and casting at any spot that looked like it might hold a fish or two when I saw a nice boulder in a couple feet of water. It was smack dab in the middle of some strong current with a nice little slack water spot right behind it and sure enough, I pulled one right out of there. Sure he was the smallest of the day but made for a nice end to the evening. 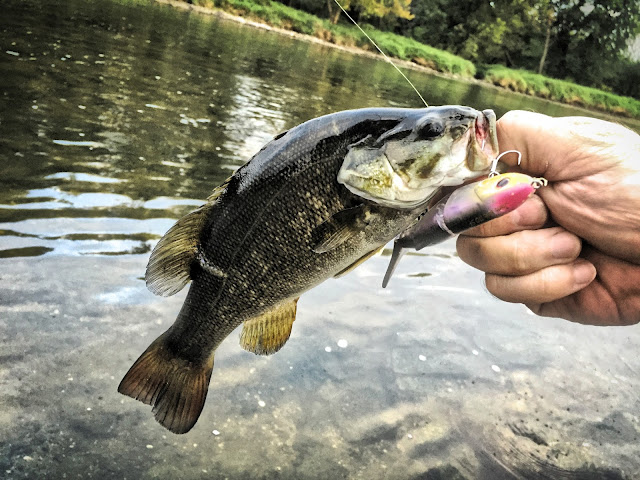 As, I started going through the footage, I realized that everything didn't turn out as I had hoped and I am a bit bummed about that. Apparently, the mic was turned off so none of my audio came out!! I had a ton of footage that I wanted to send to Fishing Physics, Biovex, and BugBam explaining the products and reviews. Unfortunately, all I have is muted video.

With that said, we can see that the Biovex and Fishing Physics stuff worked great!! What you can't see/hear is the BugBam review. If you look at my right wrist, you will see a black band - that is the BugBam mosquito repellent band. I'll post a full review on it in the near future but the short version is that I was extremely happy at how well it kept the blood suckers off of me!