In a last minute decision, I decided to fish the River Bassin Trail in Aurora, IL this past weekend. I entered the team event with Lucid Fishing founder, Teddy Wozny. I was a bit surprised he was able to fish considering the birth of his new baby, but he was, so I said why not.

The ridiculous amount of rain we have had this year - along with some terrible brown algae blooms on the Fox River - had me a bit stumped on where to go. I had one area of the Des Plains River in mind where I have typically done pretty well numbers wise but not so much size wise soTeddy and I reached out to a few friends to see where they have been doing OK at and ended up choosing a river neither one of us had ever fished - the Cal Sag.

I spent a bit of time looking at my Navionics app (awesome app by the way) to get somewhat familiar with the river but aside from that, we were pretty much going in blind.

We launched right about 5am and were to the section of the river we wanted to work by 5:20. We sat around until the official start time of 5:25am and then we started fishing. It only took a couple of minutes for Teddy to get the first fish. It wasn't a big fish but we were on the board. A short while later, he had fish number two on the board.

About ten minutes later, I hooked up and landed my first fish - our teams third fish - which was a 14.5" smallmouth. By 6:20 in the morning we had three on the board and we had visions of having to do a lot of culling. So far, we were extremely happy with our choice to fish this new to us water. 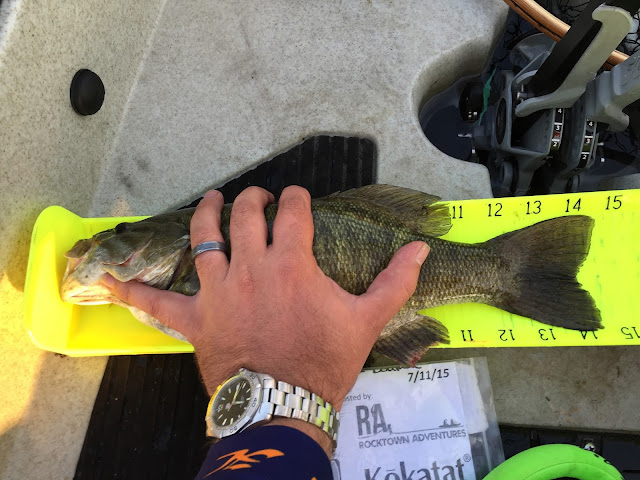 Then out of the blue, everything pretty much shut down. We were both getting a few bites but nothing was sticking. I am guessing there might have been some rock bass or something else down there that was just nipping the trailer on our jigs. Teddy pretty much stuck to the jig with a StankX Damsel trailer all day while I played around with various things.

I had two more good hits over the next few hours but just couldn't get the hooks in them. One of the hits came on the "about to be released" Biovex Joint Bait 110. I had swapped out the stock hooks with some super sharp Gamakatsu round bend treble hooks which added a tiny bit of weight to it. With just that little change, I was able to bomb that thing on a cast. As I was bulging the surface, I had a great blow up that had the fish completely out of the water. I'm not sure if the fish just missed or if it grabbed it and spit it one fluid motion but it was a nice nice fish.

The sun started popping out from behind the clouds a short time later so I switched back to the jig and damsel. I skipped the jig underneath a tree that was hanging over the bank and it got hit on the drop, but I was a tad late on the hook set. I quickly reeled back in, skipped it under there again and got hit on the drop again. This time I nailed the hook set and got her in for our fourth fish of the day. 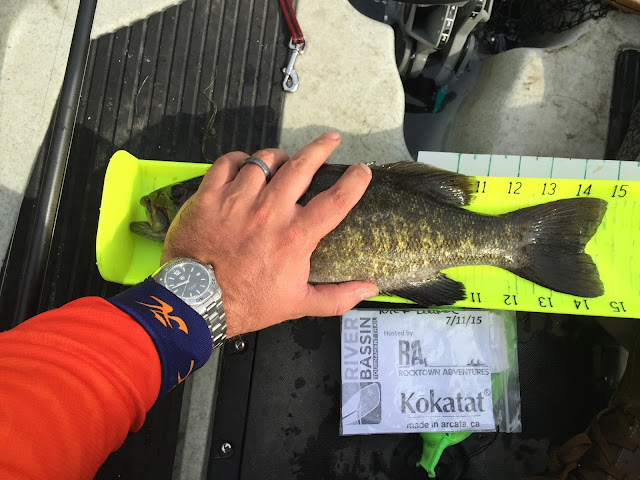 I worked that section for another twenty minutes and aside from those little nips, I didn't get anything else, but Teddy did where he was fishing!

The goofball calls me up and says something along the lines of "Dude - I'm shaking" "Tank" "Holy Cow". Naturally, I ask "How big?" His response made me laugh and then hang up on him.

So I laugh at him, called him Francis, and told him to call me back when he measures it. Now Teddy and I have both caught 20" class smallmouth before so I'm thinking this thing has to be pushing state record status.

A few minutes later he texts me. The fact that he texted me instead of calling was the first sign that he over estimated the size of this fish. I read the text (which had a picture attached) and it said "16.75" 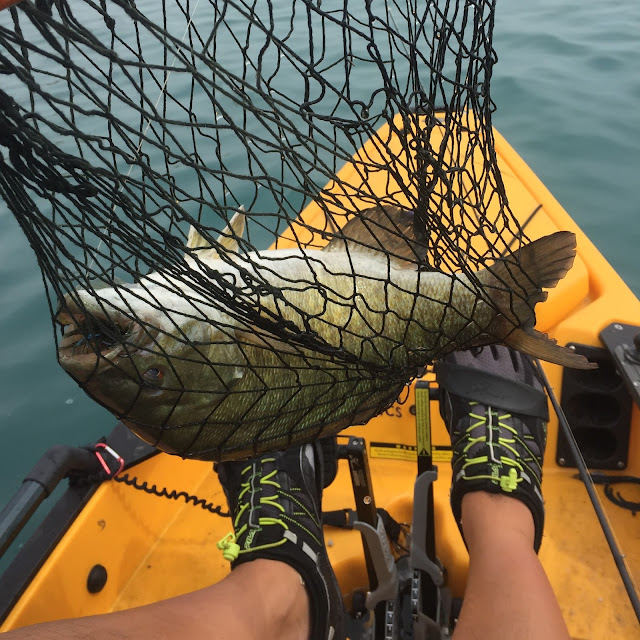 Don't get me wrong, that's a nice nice smallmouth but I still had to laugh at him for getting so excited about a sub 17" smallie. I will admit that the fish was a football. Massive massive shoulders on that thing. More importantly, it was fish number five for us and we still had three hours left to catch more and cull out some our smaller fish!!

OK....two more hours to get our sixth and start culling.

Fine - another hour to go to get that sixth.

Dude we have five minutes to get that last fish!!

Driving to the weigh in, we're checking out the live leader board and were sitting in third in teams. It wasn't terrible but I was disappointed that I couldn't pull in my third fish (our sixth) fish. We had a bit farther of a drive than a lot of the other teams so we knew that some of them were on the water which meant we fully expected to be bumped from the top three.

Overall, we were pretty happy with our finish but we could have done better. I will have to say that I was extremely impressed with the live weigh-in system that the River Bassin event used. It was easy to navigate, updated every 30 seconds, and ran extremely smooth.

We picked up some decent stuff for our 3rd place finish so I will be doing a giveaway or two in the next couple days so stay tuned!!

Reading the results of a boater tournament that took place on the same river that we fished that day, I felt even better with our results. The winner of that tournament landed two fish that weighed in at a combined 4.85lbs. Crazy!