Daddy, can we go fishing?

As I drove home from the grocery store last night and rounded the corner before pulling into our driveway, my wife was walking with the 2 boys next to the pond. I rolled my window down to wave hi to them and my oldest said "Daddy, can we go fishing?" It was getting a bit late, we had to make dinner, and I just wasn't sure if we would really have time.

I parked the truck and put the groceries away just as they had finished their walk. When the oldest came back, he said, "Daddy, can we go fishing now?"

I looked that the wife and she said "I don't care...but he needs bug spray." So we spritzed ourselves in whatever "kid friendly" mosquito spray I had laying in the trunk, grabbed a spinning rod and reel, tied on a bobber, and off we went.

Usually, the lad likes to use real wormies but I didn't have any so I grabbed some little flick shakes and wacky rigged one to the hook. My plan was to use the bobber as some depth control for an extremely weedy little pond.

Now the last time I took the little dude fishing, he hadn't quite figured out reeling. He was close...just not quite there yet. This time was a whole different story!

I did the casting into an open section of water and let him reel it in to make sure he had it down. Of course, he did it perfectly. After practicing this a couple more times, he told me " You don't have to stay stop anymore - I know how to do it" in his most confident voice ever. He of course was talking about our presentation which was to reel it in a little and then let it sit....reel it in...let it sit.

Now that he had this down, I cast it right along a weed edge and handed it over. I said, "Ok buddy...if the bobber goes all the way under and it get's hard to reel, I want you to reel it in as fast as you possibly can!"

By this point, I was getting destroyed by mosquitoes. He was not. A couple of casts later and he was working the fake worm masterfully when the bobber went under and he said "It's really heavy" in his little dude excited deep voice. 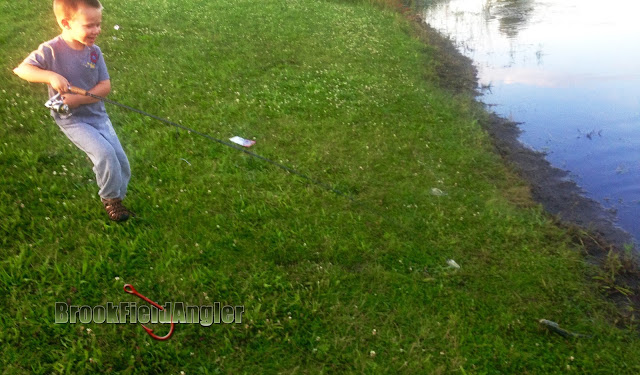 Now, I have no idea where he got this method from. He saw the fish that he caught all by himself so close to being out of the water and it just came to him. What's really funny/neat about this is that my Mom use to do this too. I saw a part of her in him that really let's me know she is still all around me.

As soon as that fish was out of the water, he rushed over to it and asked if he could take the hook out. Since I didn't feel like watching a hook go through his little fingers, I suggested that I do it but he could throw it back in the water - a compromise he was very happy and excited about. 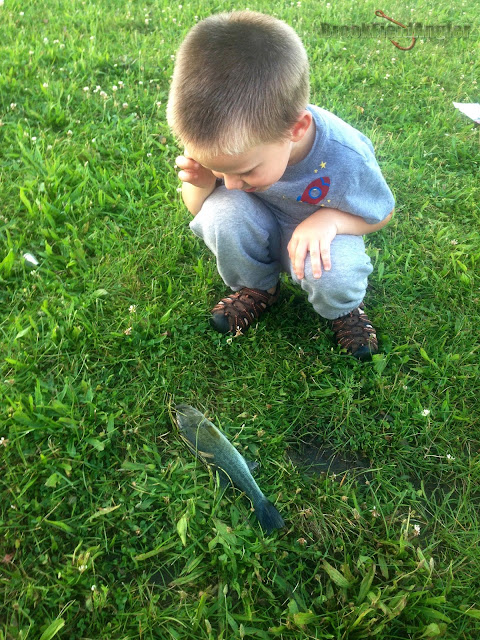 After that fish, we tried a couple more times but the mosquitoes and bed time was enough to end the short outing at the pond. It's really fantastic having that little thing just across the street. There are always neighborhood kids out there fishing which reminds me of my formative years.

Now that he has the reeling thing down, it's time to get him on a big old carp!
By BrookfieldAngler
Email ThisBlogThis!Share to TwitterShare to FacebookShare to Pinterest