Fishing a tiny sliver of open water on Lake Michigan

With Chicago having the coldest February in 140 years, trying to find open water on Lake Michigan has proven much more difficult than normal. With the bitter cold, it takes a magic combination of industry and the right winds to blow some of the ice pack off shore just enough to get a kayak in there.

I have been dying to get out on the big lake but between a lack of time and that magic combination, it just hasn't happened. Sure, there are a few spots on some local rivers but most are either shoulder to shoulder or too damn small to get any sort of kayak in there. The one big river spot is more than a 12 mile round trip pedal and generally only results in a bunch of tiny bass. 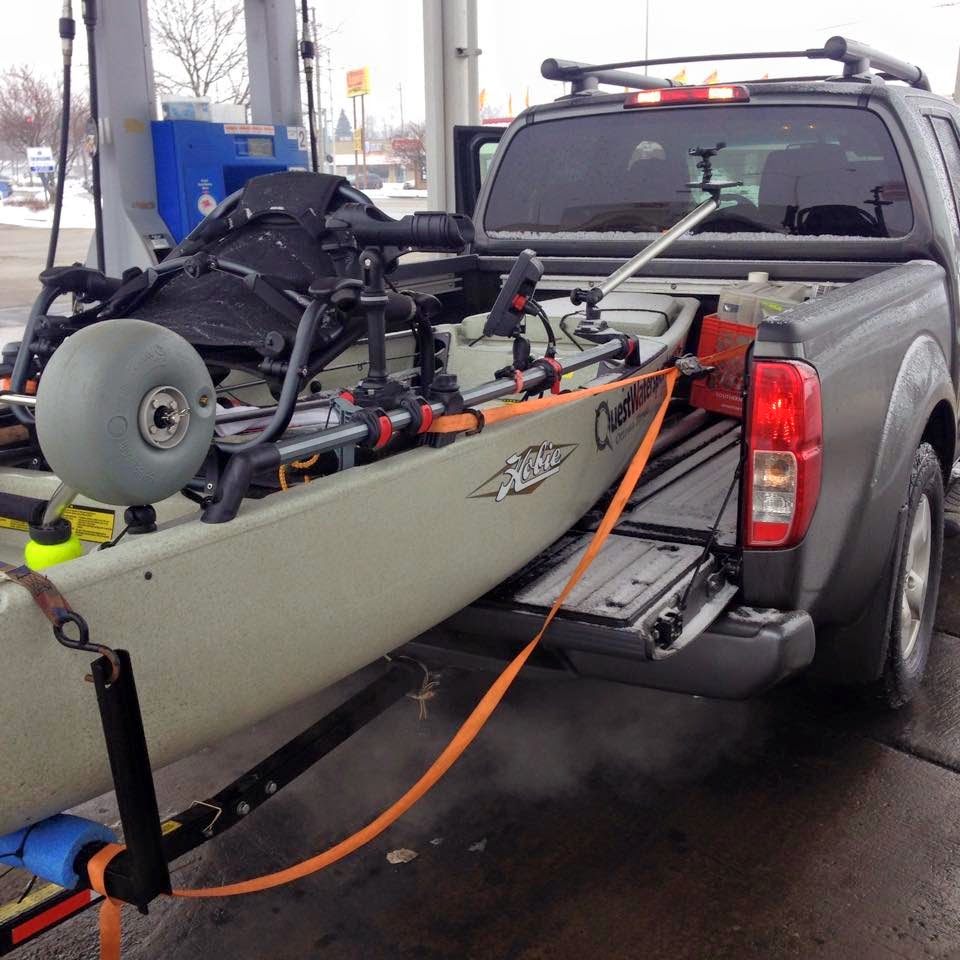 I wanted bigger. I wanted a salmon or a steelhead or a brown trout. Milwaukee was my initial plan throughout the week but that hope dwindled more and more as each day passed. Various webcams, Facebook groups and pics, kept showing ice everywhere. It was awful. I had one trick up my sleeve in Indiana but I really didn't have a lot of hope for it after a bit of research. I needed a ton of south wind for a few days but never really got it. Sure, it was south/southwest for a couple days before Sunday but it wasn't very strong.

Still, I decided to take an exploratory drive to see if I could get lucky. Without a lot of faith, my head wasn't really in the game so I grabbed my crate filled with tackle, loaded the kayak in the truck, and off I went on my 1 hour gamble.

The constant snow during the entire drive gave me both hope and doubt. On one hand, I have always done extremely well out there on over cast days and snowy days. On the other hand, it was a reminder that it was still winter and still cold.

As I pulled up to the spot, I was extremely happy to see some open water. It wasn't a lot but it was enough to get in there. I suited up and took a quick walk to figure out how I was going to get the kayak down to the water. The beach was covered with at least of a foot of ice/snow and getting down to it meant dropping the kayak down a 6 foot wall of icy boulders. I found one area that had some slope to it and a small chute that was just wide enough for the kayak to slide down. 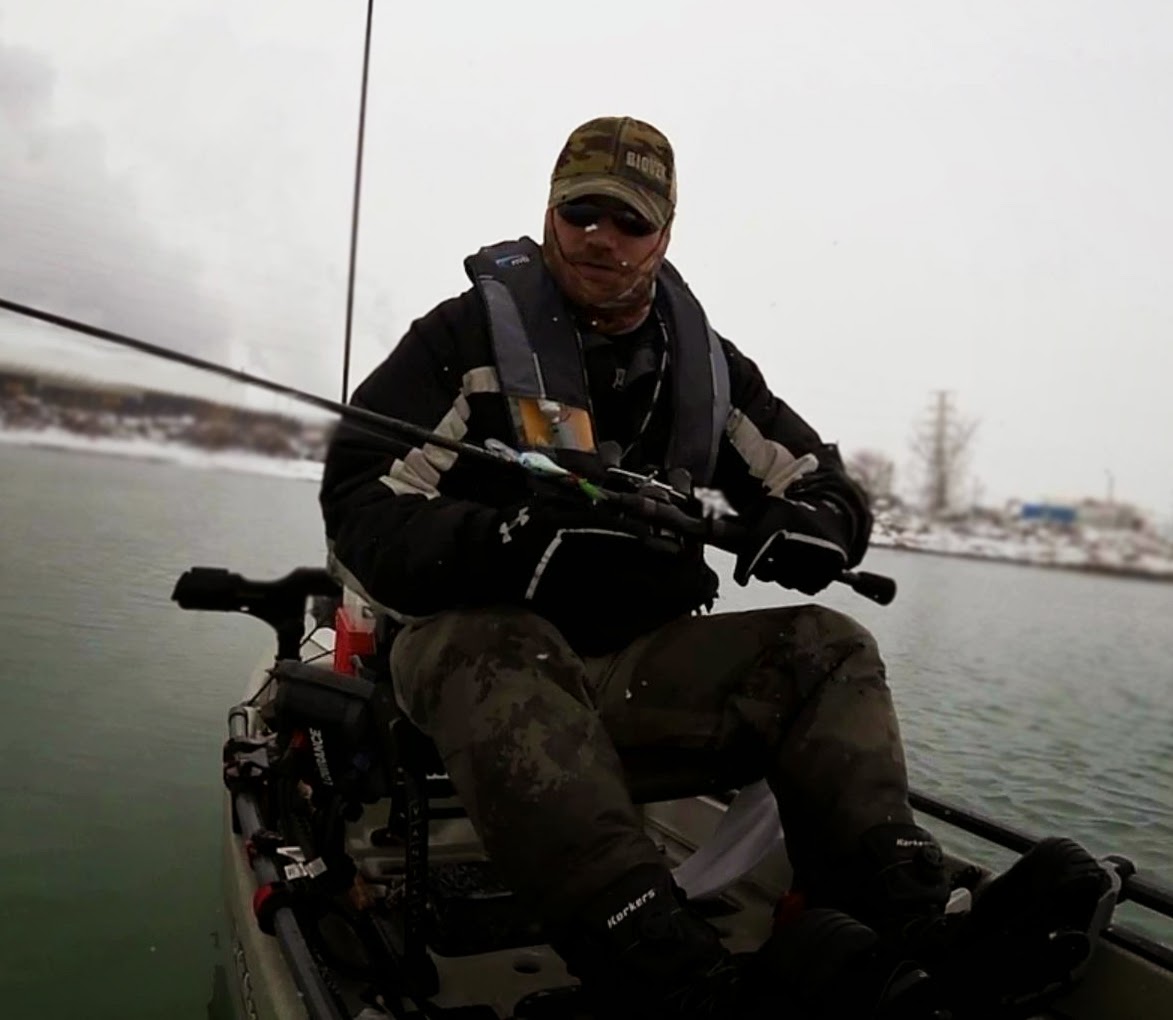 Once I got it down - which wasn't nearly as easy as I thought it would be - I wondered how in the world I was going to get it back up there. Oh well...I'm here now; let's worry about that part later.

As I started rigging, I realized that I grabbed mostly the wrong tackle. Almost everything I had was for bass with the exception of my king salmon crank baits. The problem with those is that they dive to 12 feet and the deepest spot in this little patch of open water was 8 feet. Luckily, I had my Biovex Mid Runner crankbaits that hit about 5' on the cast so I started off with one of those. I went with meshback shad since I have had quite a bit of luck on that color combo before.

It didn't take long to feel a tug on the end of the line. As a matter of fact, in the 3 hours that I was actually out there, I felt a LOT of tugs. The problem is that almost every one of those tugs was not a fish that I was going for. Even worse, none of those were even "legal" catches in the fact that the hooks were outside of the mouth. How is that possible? Well, this place was loaded with gizzard shad. Thousands upon thousands of them if I had to guess. While they put a good fight, they only eat plankton so actually trying to "legally" catch them is nearly impossible.  In other words, I couldn't stop snagging these fish. They were everywhere. Almost every cast resulted in my bumping into three of them. Most came unhooked before reaching the kayak and the ones that did make it were unhooked with a set of pliers without ever taking them out of the water. The only legally caught fish was one extremely small coho who was too small for Kayak War points so he went on his way without a photo. I have almost no doubt that there were more coho in the area but I just couldn't keep a lure free from the side of a shad long enough to get any of them on the line.

I had grown tired of hooking shad so I decided to tackle my challenge of getting my kayak up that icy boulder wall. With a ratchet strap on the front end of the kayak, a few breaks to catch my breath, and a couple of adjustments, I had gotten it up there. I have to admit, I sort of missed my outback on the ascend up the bank. That extra 40 pounds on the pro angler was definitely noticeable.

In conclusion, thanks for reading the longest story about not really catching any fish! I suppose in hind sight, I could have given you a warning at the beginning of the story but that wouldn't be any fun.

Since I don't have a "I didn't catch any fish so here's a picture of the sunset" pictures, I'll leave you with this one. Twenty feet to left is the start of the ice that spreads well into Lake Michigan. About 80 yards to my right, is the frozen beach. The entire area I had to fish was about the size of a football field. Crazy what a desperate kayak angler will do to scratch an itch. 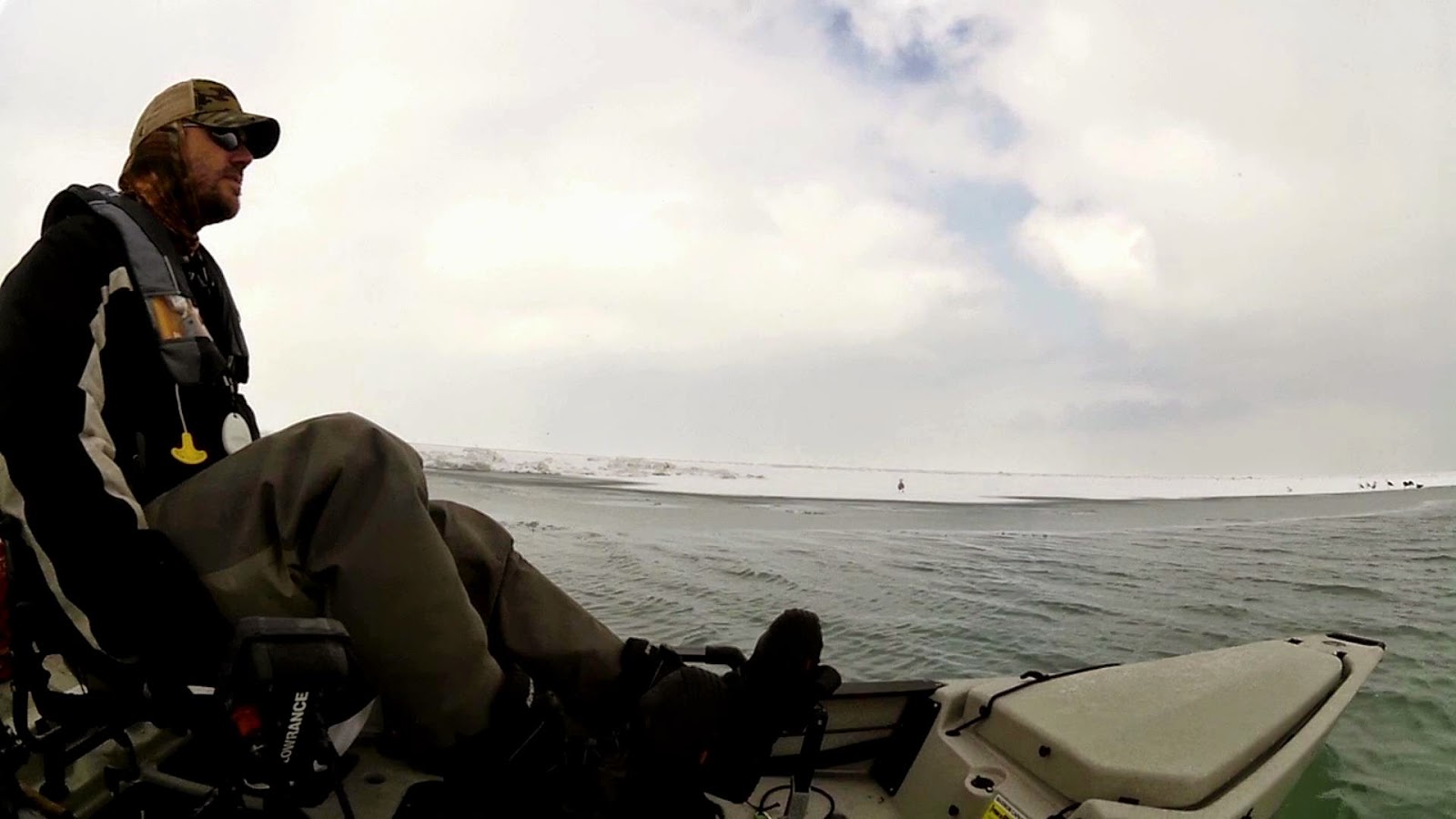