Reel Tuning - is it worth it?

I have never really been one to buy into the whole reel tuning thing. By tuning, I mean upgrading bearings, drag discs, and all that other jazz. To me, a good reel is just fine right out of the box. However, I had a couple of reels that had been used hard for a few years and needed a bit more than a quick drop of oil so I found a place called Slayer Reel Tuning.

I shot the owner - a guy named Ben - a quick note about what I had, what I wanted, and to see how long it was all going to take. Rather than shipping the reels to him, it turned out he was going to be at one of the outdoor shows I was going to so I dropped them off in person.

The first reel was in a gen1 Revo STX that already had some Boca bearings. I had purchased it that way so I wasn't sure how it felt with standard bearings but it felt a little "sluggish" to me. By that, I mean it felt like the spool should spin a lot faster and easier than it did. It is my jig/frog reel so everything I ever throw with it has enough weight that it really didn't matter bother me too much. Still, I wondered if it could be better. It has a pretty strong drag so I just got the basic lube and tune done and had him verify that it did indeed have Boca's in it. 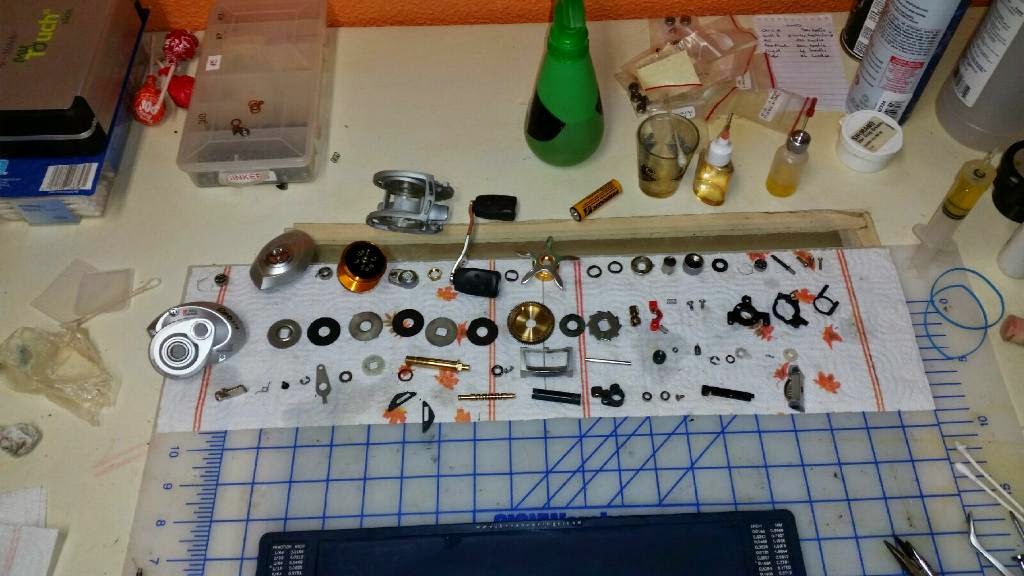 The second reel that I gave him was a Curado 201e7. I have had this reel for a few years now and had always been extremely happy with it. I was able to throw some pretty light stuff with it but it really started to get noisy last season. I also found myself struggling with distance on lighter lures so, rather than just getting the basic lube done, I figured what the heck...let's see what all this "tuning" hype is about and see if I could get this reel to do what I wanted.

This reel is mated with a custom built Phenix X10 crankbait rod and loaded with 10lb fluorocarbon line. It's main function is light crankbaits that range from surface to medium depths. It will also pull part time duty for light jigs for Lake Michigan smallmouth. Most of the time, a spinning reel would probably be a better choice for what I want this combo to do, but I really wanted to stick with the casting style since I am much more comfortable with it. To make this all happen, Ben installed some Boca Abec 7 bearings.  Since I was going to be running pretty light line, I needed a strong but extremely smooth drag so in went the new Carbontex drag washers.

Three days after giving Ben the reels, I got a text saying they are done and ready to ship back to me. It turned out he was going to be at another show I was going to be at on the upcoming weekend so he just dropped them off to me. Fast and convenient are two very important things to me and he had met those with flying colors. Now for the big test...was any of this worth the money?

Speaking of money, everything on both reels only cost a measly $70. That's total for both by the way...not each.

I spooled new line on both reels and hit some of the only open water around here to put the reels through some real world tests. To challenge the STX, I wanted tied on a small 1/8oz jig head with a small grub and found some lay downs along the rivers edge. After a bit of adjusting on the brakes, I was extremely happy that I was able to actually pitch that small presentation. When I bumped it up to 1/4oz, it was even better. The reel was smooth as could be.

After an hour of playing with that reel, I broke out the cranking set up with a very light crankbait that I had struggled to cast a couple of weeks ago. I pretty much turned off all the brakes on the Curado and let it go. Oh...my....goodness!

Despite the 25 degree air temps that caused the flouro to stiffen up a bit, this thing sailed. In all honesty, it cast so much better than I anticipated that I quickly found my crankbait in a tree. Normally I would just stop the spool but I really wasn't anticipating that kind of distance so my reaction was a bit slow. This is awesome because if you have ever fished crankbaits, you know the name of the game is long casts for maximized time in the strike zone. I spent the next hour playing with different crankbaits and am extremely pleased with how well it casts them.

I didn't have anything put the drag to the test but judging by a few "not sure what that was so I am going to set the hook" hookests, I am pretty sure it will be just fine.

In closing, if you aren't really sure if getting your reel "tuned", I highly recommend it. The Curado is such a stellar reel outside of the box...with the upgrade, it's noticeably better. If you aren't confident in doing it yourself (and judging by the picture above I completely understand why), then you might as well send it off to Ben at Slayer Reel Tuning.