This past Friday, I teamed up with one of my regular fishing partners and friends, Teddy Wozny with Lucid Fishing. We met up with another friend of ours, Kal, to go chase some monster brown trout on Lake Michigan. The weather for the day was in the low 20's, occasional snow, and a strong south wind that was gusting over 20mph. All that added up to a "wind chill" or "real feel" of about thirteen degrees (That's Fahrenheit for all of my awesome non-US friends) In other words, it was perfect weather to go kayak fishing!

When we got to the launch, there wasn't another person or car there until one boater showed up and looked at us as if we had three eyeballs. There was ice by the docks but most of the harbor was ice free. We quickly got the kayaks rigged up, put on our cold weather kayak gear, and by about 9:00am, we pushed off.

My personal mission on Friday was to test the Biovex crankbaits on brown trout. When I first started talking with the folks from Biovex, I was easily convinced that they worked great for bass. As much as I like catching bass, I wanted to prove that they would be killer on Lake Michigan for big brown trout and salmon as well. Ultimately, I wanted to put them on the map for Great Lakes anglers! This was my first chance to put that theory to test. I was also hoping to do some jigging with some of the new NXT LVL baits from the StankX Bait Co., but the wind, temperatures, and waves just didn't really allow that to happen.

I wasn't really sure where in the water column the browns would be so I started the day with a deep runner - color #55 (blue back) - on one rod and a mid runner on the other. As I trolled the calmer water in the protective harbor, I was only marking a few fish here and there, but not nearly as many as I had hoped. Kal and I decided to leave the protective harbor and head out to the rough stuff. It didn't take long before I had my first hit on the deep runner but I couldn't keep the fish on the line. A few minutes later, I had another hit on the deep runner that I also couldn't keep connected.

Since I had two hits on the deep runner, I decided to switch the other rod over to a deep runner - color #60 (Hot Shad) as well. It only took about two minutes to switch out lures but without gloves on, my hands were painfully cold by the time I was done!  I got my gloves back on, let both lines out, and started trolling as I regained feeling in my fingers. Over the next hour, I ended up getting hit twice more but still couldn't land one!! I was starting to get frustrated but I was pretty sure that I knew the solution.

The solution was to strip off the majority of my forty foot, twelve pound test, mono leader. I had theorized that the flexible rods and super stretchy mono just wasn't getting the hooks set. The part I dreaded about this fix was that in order to implement it, I had to take my gloves off again!! So, rather than dealing with it in the rough and windy water, I headed back into the protected harbor to take a quick potty break and to put my plan into action. I removed thirty feet of mono - which left about ten feet of leader and a spool full of 30lb braid - and left the hot shad colored crankbait on one rod. On the other rod, I left the mono on but switched over to a spoon since Kal was doing good with them. This also gave me a chance to put these crankbaits against a proven brown catcher.

Teddy, Kal, and I peddled back out of the harbor, dropped lines, and I very quickly got hit again on the crank! This time, the fish stuck! Even though he was a little guy - and not the big one I was really looking for - my solution seemed to have been the right one!! 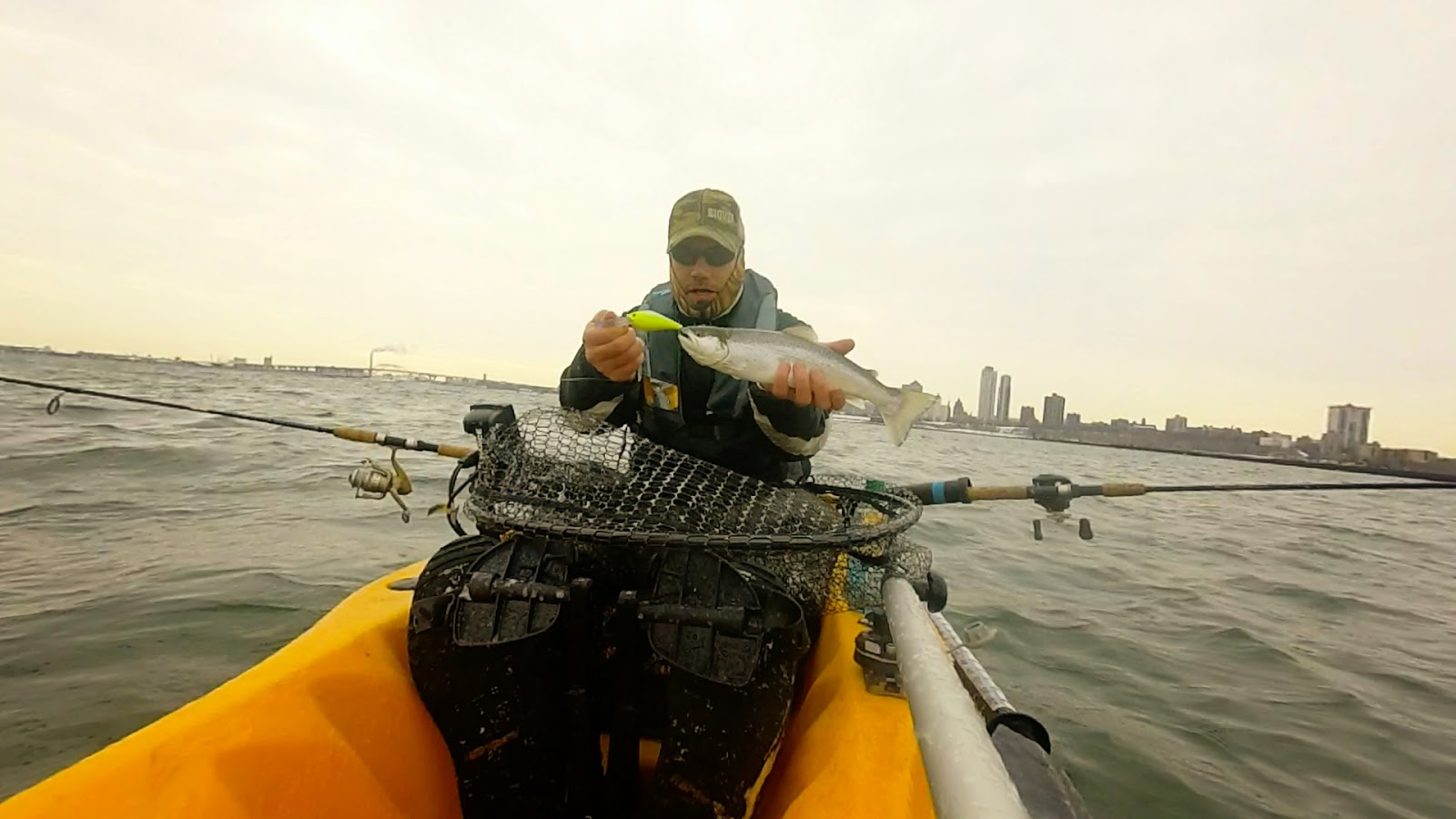 In the moment, I thought it was a brown but as I watched the video footage, I am not entirely sure it wasn't a small steelhead. Regardless, I was finally landing fish!!

Over the next hour...hour and half, it was fish mania!! The next hit came on the spoon and was a gorgeous hook jaw male that was closer to the size I had been hoping for! 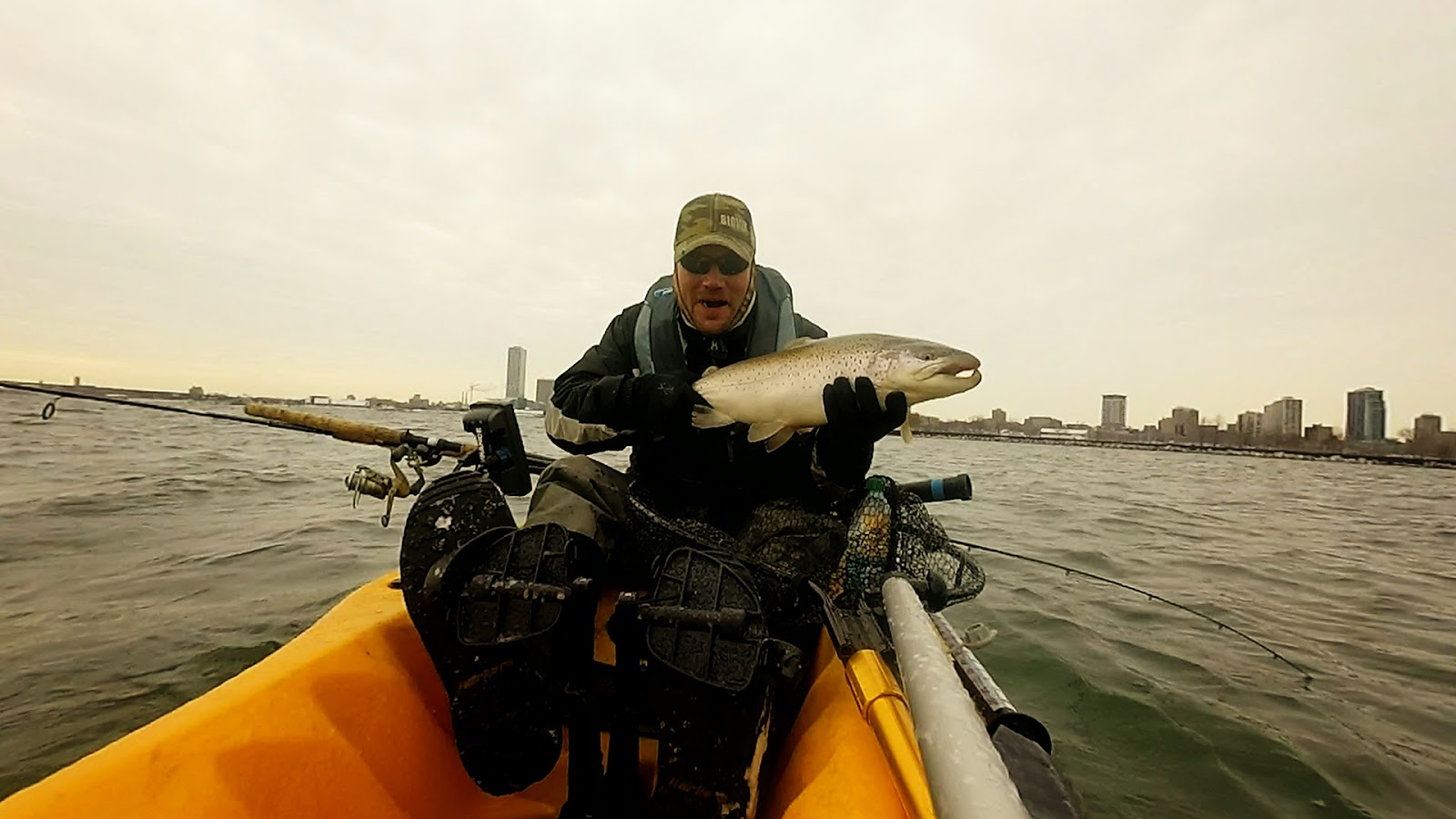 I was definitely pumped about that fish but I knew there had to be a bigger one out there!! I let both lines back out, got another small fish on the spoon, and kept looking for that monster. After that fish, the spoon got no attention the rest of time I was out. Everything else came on the crankbait!

As I was trolling, I saw the crankbait rod get slammed! The rod tip was well into the water and the drag was ripping!! I peddled forward as fast as I could to the make sure the line was set, grabbed the rod, and turned the camera on. I was NOT going to lose this fish!! The fish made her first appearance about twenty feet from the boat and when I saw it, my eyes got big and I yelled "OH YEAAH!!!!!!!!" 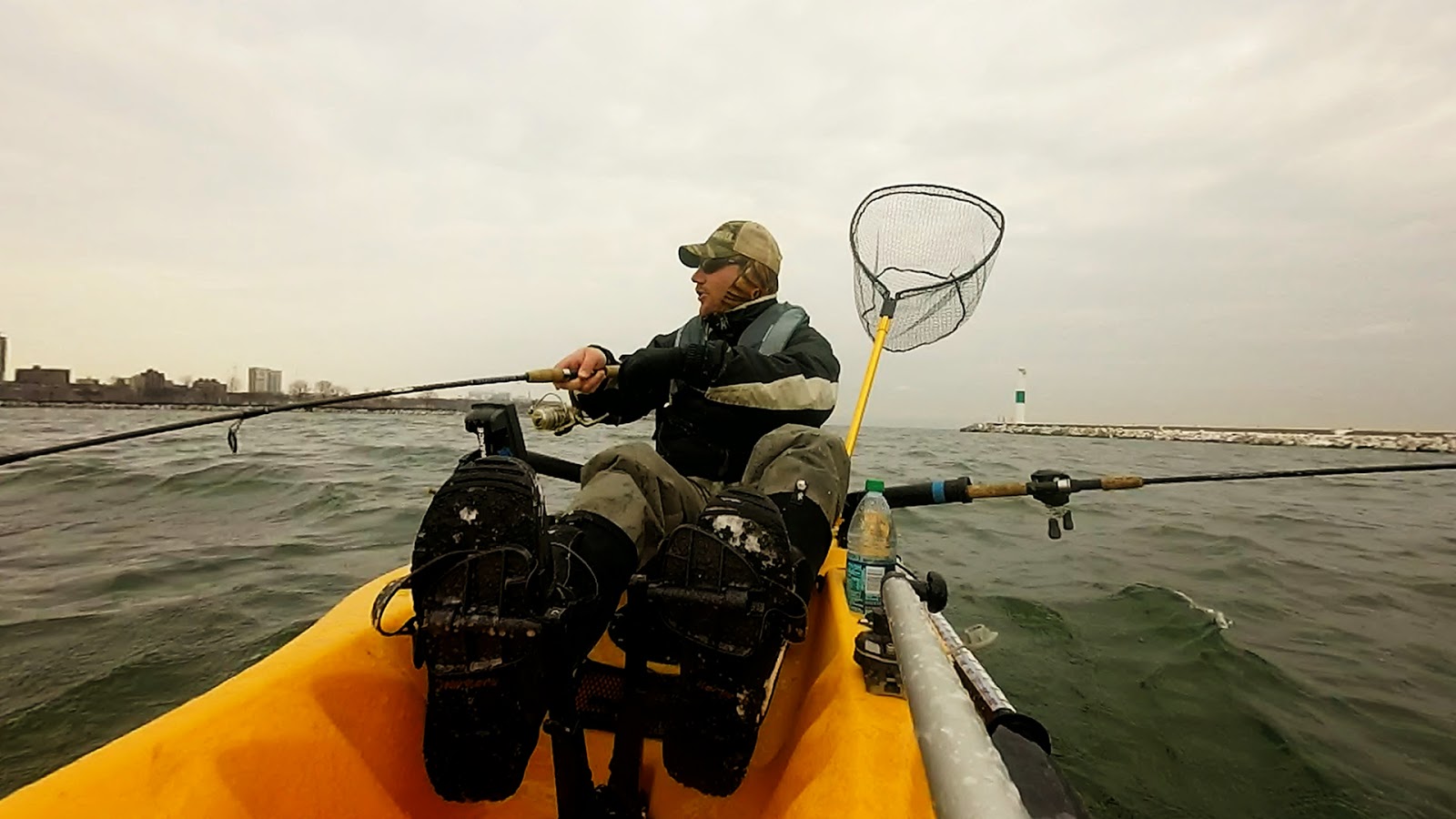 This is what I had been looking for!! If a brown trout the size of a big Lake Michigan king salmon doesn't get you excited, then I don't know what would!!!

My first attempt at netting her proved to be premature as she jumped right out of the net to show me that she wasn't finished trying to escape. 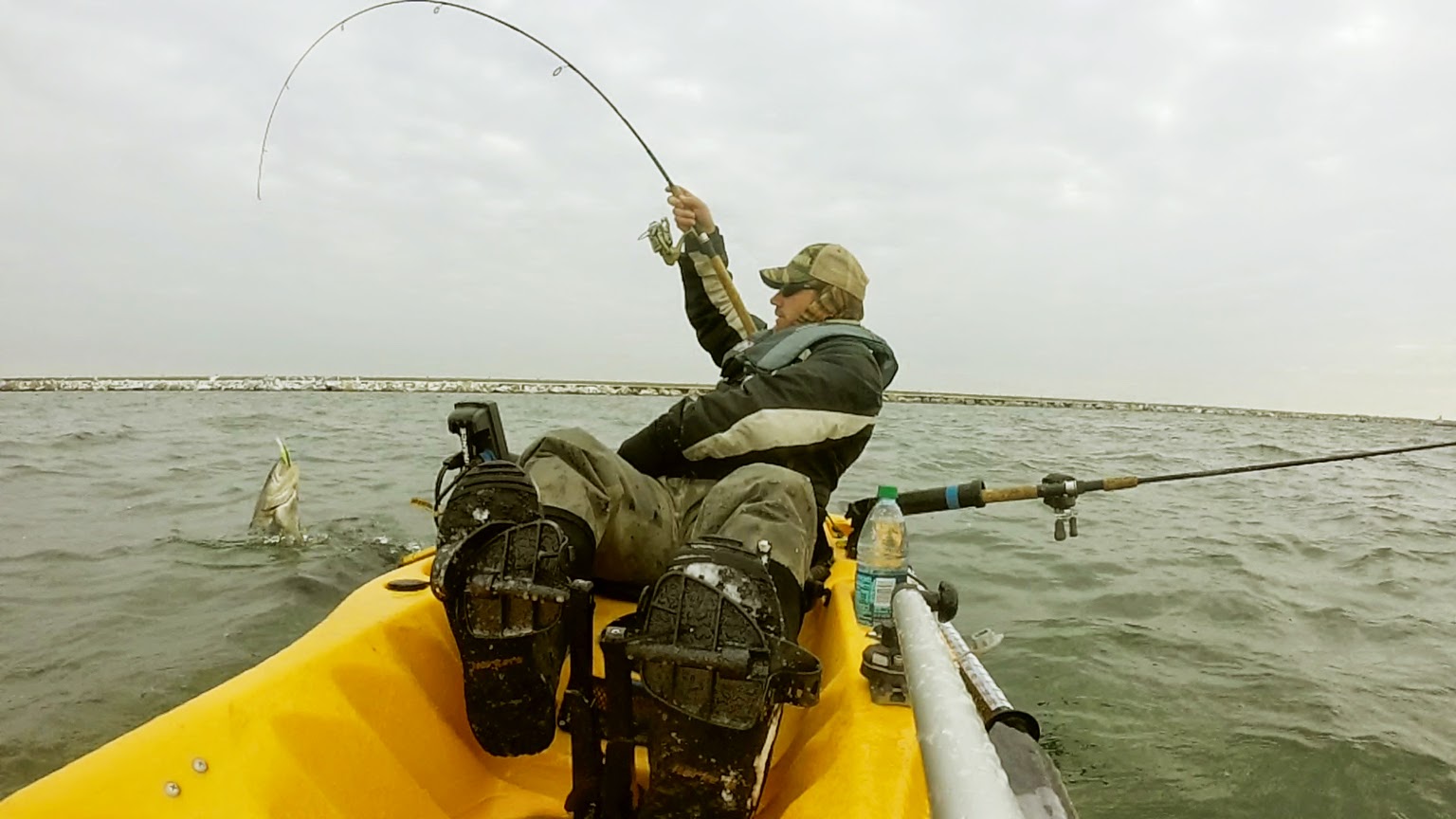 It took me two more attempts to finally get her in there and I was PUMPED!!! This was easily the biggest brown that I had ever landed and she had completely run me out of breath. 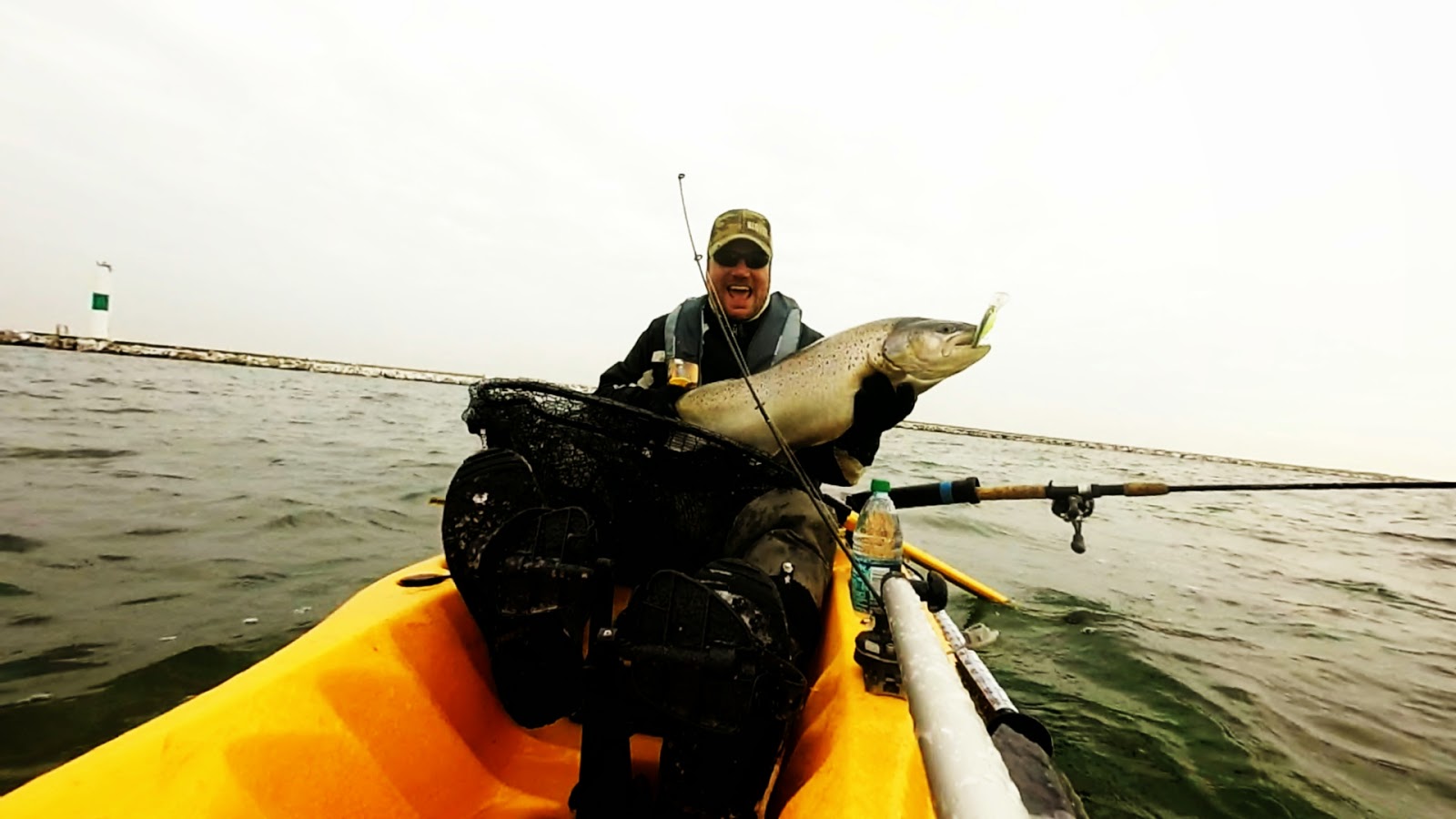 I grabbed my Lucid Fishing Grips to get a quick weight and my jaw dropped when I saw the 20lb line on the scale!!! 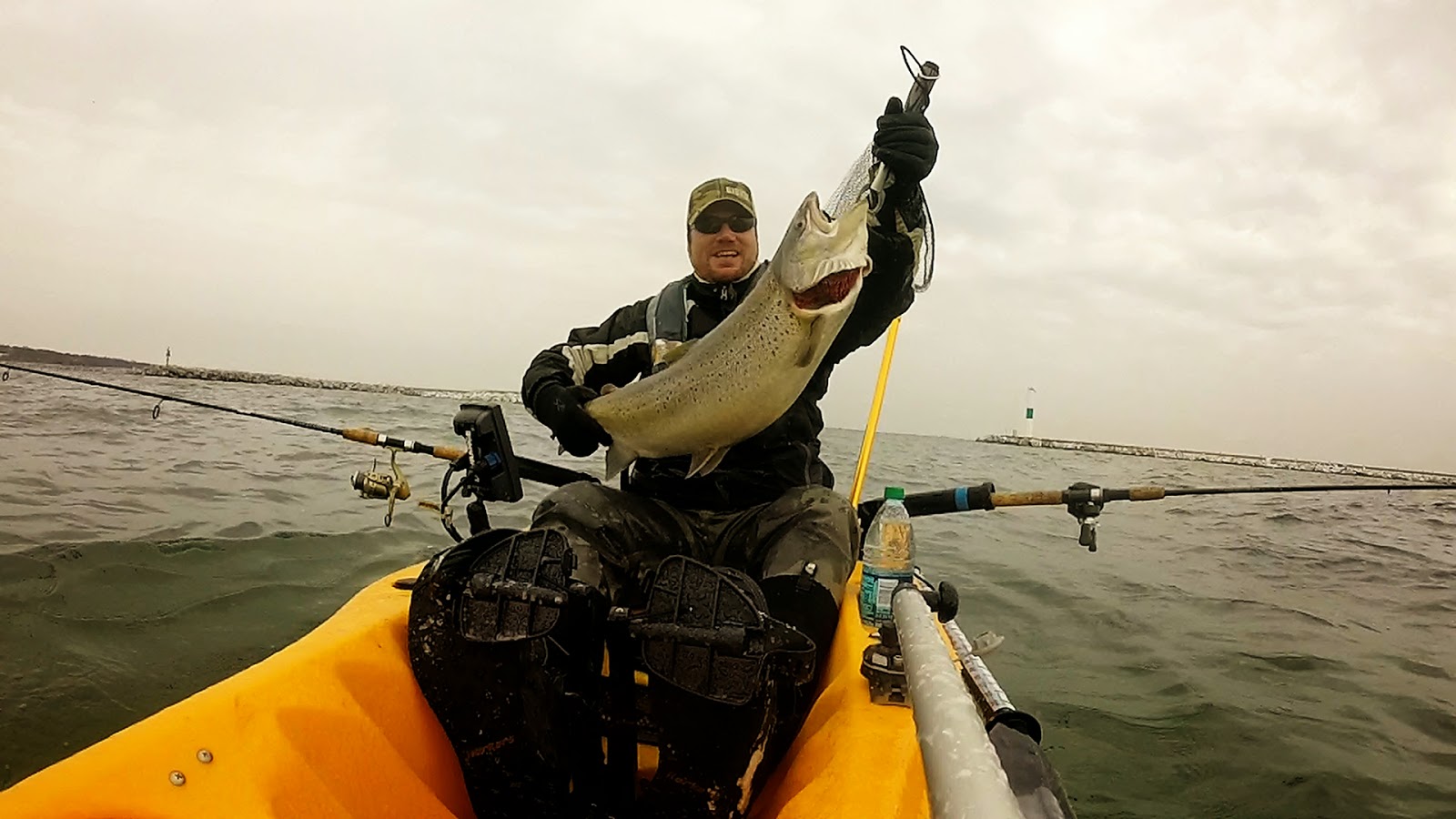 I got her back into the water and held her on the grips until she was ready to go. Not even a minute later, she kicked, I hit the release on the grips, and she swam right down to get back to doing what she does best.

By this time, it was almost 1:00 pm and the winds were picking up even more. Kal was already on his way to the launch/landing so Teddy and I did one more lap along a breakwall and started to troll back in. As we got back into the actual harbor, I got hit for the 11th time and it was once again on the crankbait. The fish felt much bigger than it really was but it was a great way to end the day!! He apparently didn't like the cold air and wiggled his way out of my hands before I could get let him go nicely. I couldn't really blame him as it was collllllddd!!!!!!!!!!! 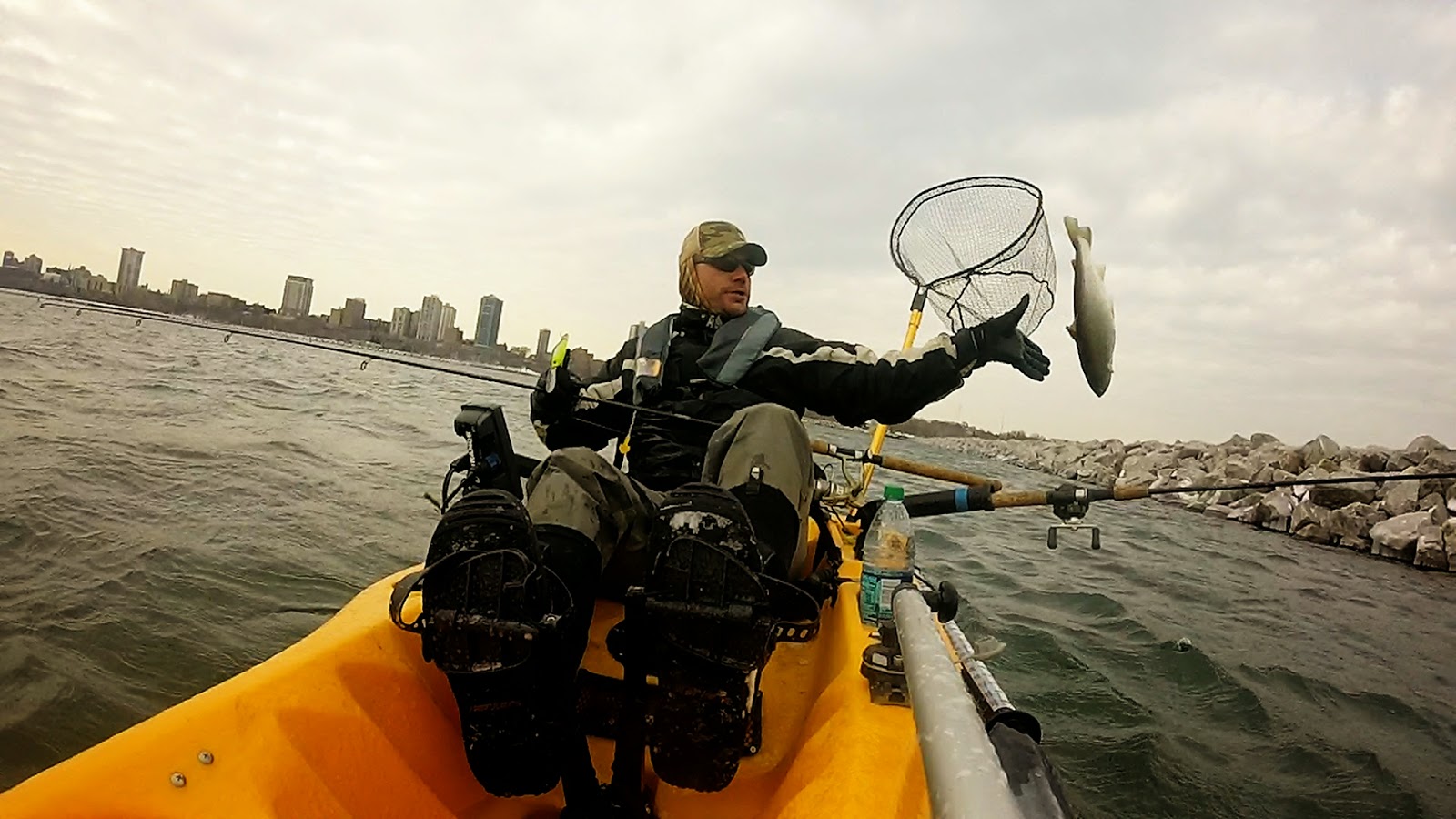 As I made my approach at the launch, I could see that the ice had really begun to build up. In addition to the icy launch, my kayak was virtually a giant hunk of ice! 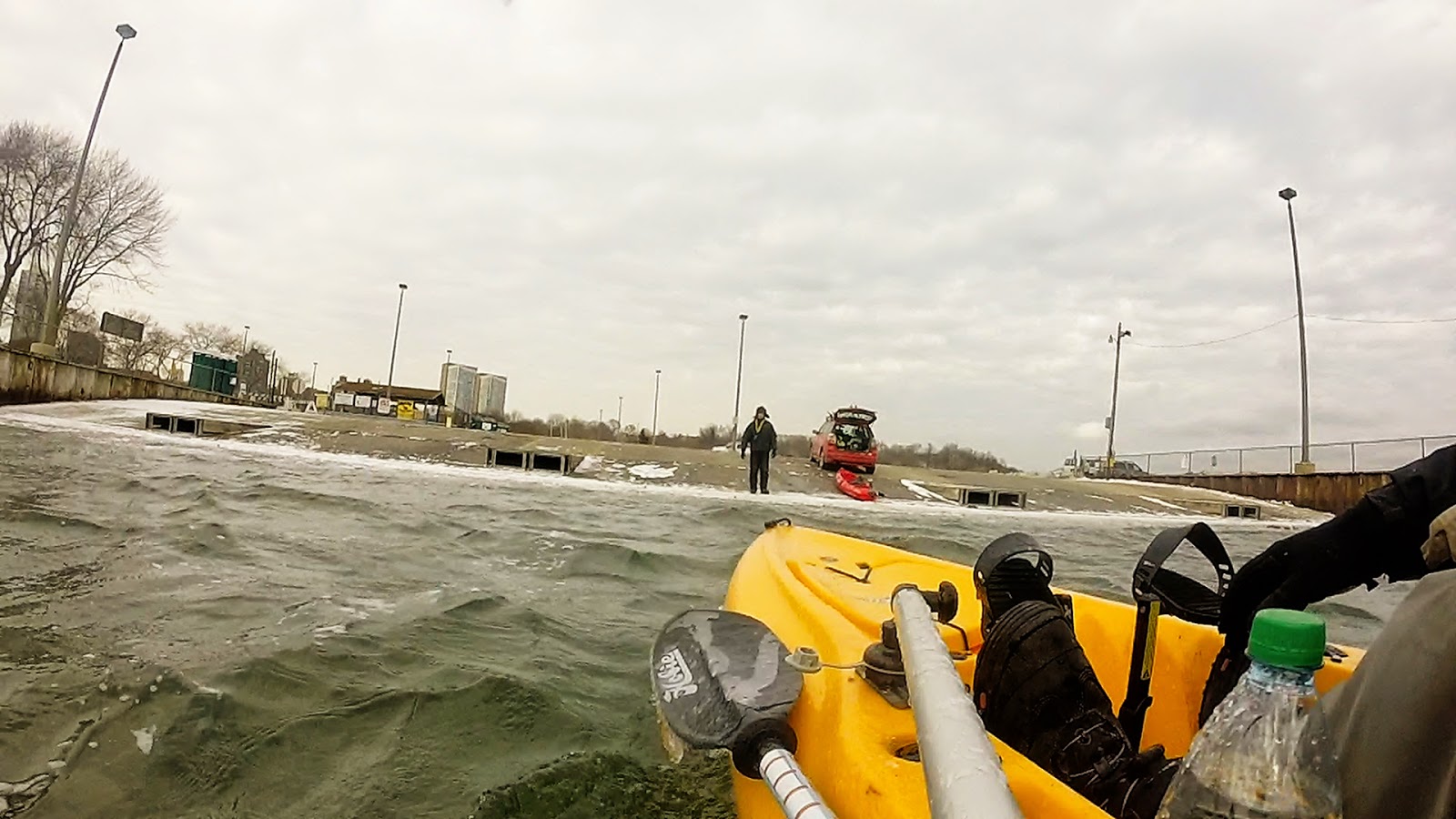 I do have to admit, the nonstop action made the frigid cold extremely bearable. There were times I actually felt downright toasty out there thanks to some fish induced adrenaline! If the fishing was slow, I probably would have headed in much sooner.

I am also extremely pleased with how well the Biovex cranks worked. My final tally was five fish landed on eleven strikes. All but two of the strikes came on the cranks. Even more impressive was the durability!! Kal was trolling some other cranks and destroyed two of them. The Biovex's held up to nine fish and I didn't even have to change out a single treble hook!! I have to find out for sure but the stock hooks look like they are Gamakatsu 2X strong round bends. These are the same hooks that I replace the factory ones on some other well known salmon crankbaits! I absolutely can't wait to use these cranks on the spring time coho and ultimately, fall run king salmon!!!!

Finally, here is a video of the all the above mentioned action!!!!