Earlier in the week, I made the announcement that this blog was nominated for Yakangler.com's Kayak Anglers Choice Awards (link to that post here). I am still on cloud nine about that one and could use every vote I can possibly get - so if you have a second, stop over there and vote! The blog category is question 10 and if you want, you can skip the first 9 questions and head right to number 10.

In the beginning of that post I mentioned that I did a bit of exploring and thought I'd share some info about that! Last weekend started off a bit rough that included a fever, plugged sinuses, and generally feeling like crap. By Sunday, the fever was gone and I felt moderately better so I decided to go check out this area that I have been wanting to explore for quite a while. I didn't want to carry a bunch of stuff so I grabbed my 6wt and a handful of flies.

The area in question is called Bear Trap Dam. It's not a dam like I would typically imagine rather a wall that keeps 2 separate bodies of water separated. On the high side of the dam, is the Chicago Sanitary and Ship Canal. On the bottom of dam is the Des Plaines River. From what I have been able to find, if the water levels are too great in the ship canal, then they drain some of it into the Des Plaines River from that dam. (not sure how that works out with the asian carp though....) 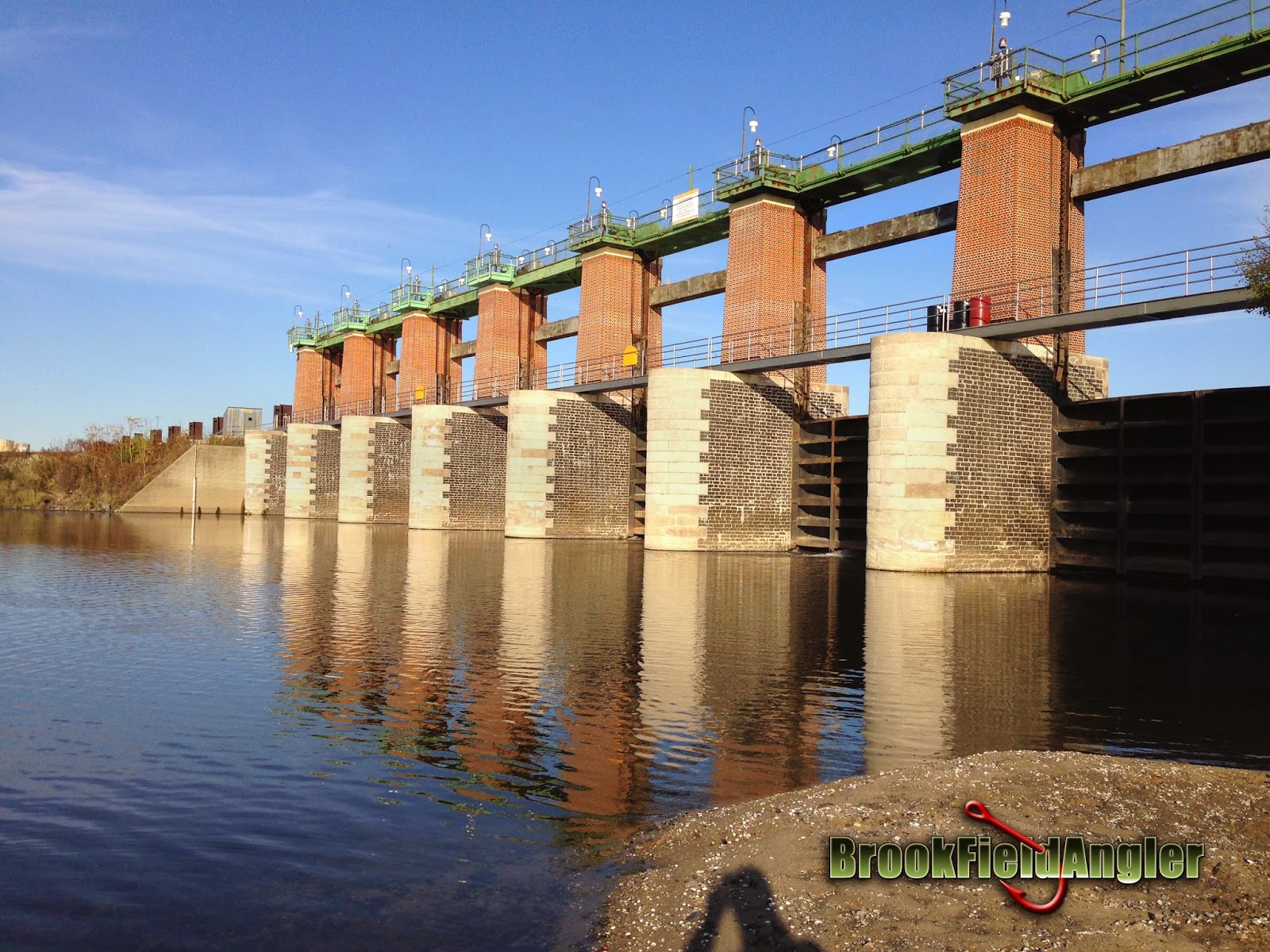 To get back there requires a somewhat lengthy wade on a section of the river that is mostly bedrock. I am not a geologist by any means but I want to say that a lot of the bottom in that area of the river is limestone - I could be wrong on that. Regardless, it's pretty darn slick on those rocks so I was rather happy I chose to wear my Korkers Devil Canyon boots with the studded soles. OK...I didn't pick the studs specifically on this day, I just didn't feel like taking them off from the last trip. Still...happy I had those on. HA HA

Now I have fished the general area that I had to wade through to get to the dam a few times before.  With the exception of a carp or ten, it's essentially dead water...and a lottttt of it. In retrospect, I think that is why I havent explored this dam before. It's a bit off the beaten path and there is so much good water upstream and downstream of this area that it never seemed worth the effort.

For whatever reason (possibly at the nudging and questions about the spot from a friend that morning) I decided to make the journey. Once I finally got back there, I stopped to take some pictures before securing my phone in my waders since I didn't have a waterproof case on. I waded around the area extremely cautiously as there were some very quick drops. Once I got a general feel for the area, I spent about fifteen minutes casting and landed three smallies in the 12" range.

I'm not sure why but I just wasn't feeling it. Perhaps it was the visions in my head of the gates opening and water rushing in? Maybe the realization that I really didn't feel that much better than the day before? Maybe it was a combination of both. What I have been able to figure out is that there are indeed fish there. In my honest guess...there's a very good number of fish there and a variety of species. I can certainly see smallies, drum, cats, and carp hanging out there. It's a little far south on the river but I wouldn't be surprised if there were some pike or walleye swimming around there either.

Still, I just don't know if it's worth the effort to get back there. I think you would be better served with the same variety of of fish a bit further upstream at Isle a la Cache.

In other news, stillllllllll no baby. His due date was Monday but it seems like he is rather cozy inside of mommies belly. If he doesn't come out of there by the end of the weekend, the doctors are inducing labor on Monday! The bright side of the delay is that L (my 3yo) will be able to go trick or treating tonight!! He is extremely excited this year and has multiple costumes.

This is it from me for the next week or so while we welcome our 2nd son into the world. After that, I have some extreeeemly excited fishing announcements coming up!!! Can't say much right now but look out fish....I am coming for you!