On Friday afternoon, I jumped in the truck to head east for some musky on the fly action. I rented a cabin for the night and got an early start on Saturday. Fishing with me was a long time coworker and Randy from Predator Pursuit Indiana Musky Guide Service. I haven't been out with Randy all year - well not for musky at least. We have done a few salmon trips this year but I was really jonesing for some esox action and this was my last opportunity of the year to get over there.

The morning was gorgeous. Nice and cool with an extremely light breeze. I was three casts into the morning when the rod was loading on my backcast and I heard/felt a snap. Son of a mother!

Luckily, Randy had a spare 10wt in the boat so I quickly swapped the reel onto that rod and got back at it. I gave it a few hours without so much as even a sniff.

Also, Randy had a follow on some small rubber jerk bait that looked like an oversized sluggo.

Since my flies were getting absolutely no attention, I grabbed the conventional stuff and found a bigger version of whatever that thing Randy was using. That got me one follow but no bites. Finally, Randy got hit in his sluggo looking bait. I grabbed the net as Randy brought the fish to the boat. Woohoo! A fish!!! It was only 36.5" but at least we were on to something!!! 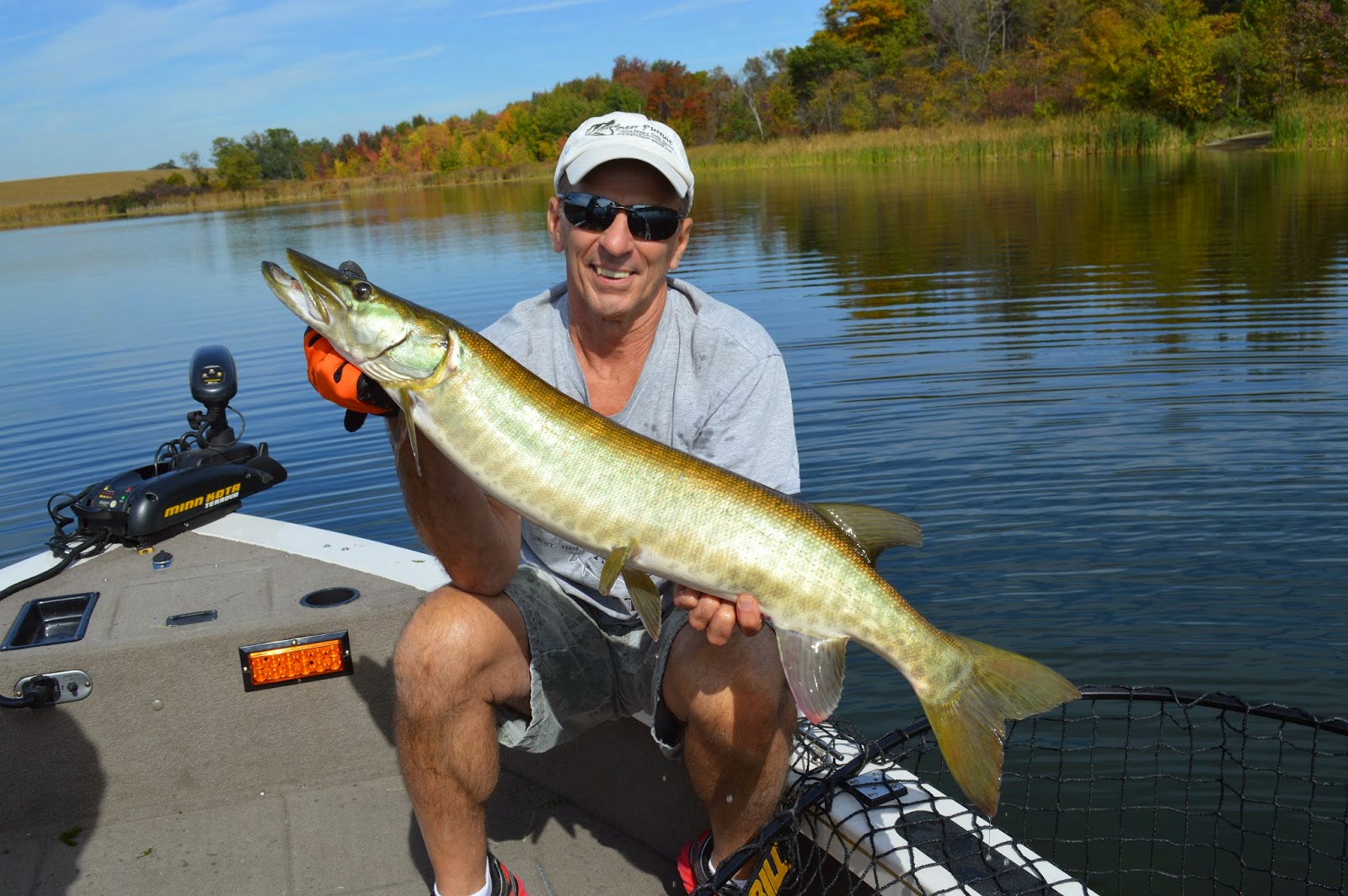 That "something" had us digging deep into the box looking for the unconventional stuff.

At this point, it was lunch time and we were scratching our heads a bit. In total, including my one follow, the boat had six total follows, one miss, and one fish in the boat.

We grabbed a quick shore lunch which gave us a chance to talk to some other anglers who were coming off the water as well. They were all just as perplexed as we were. Follows, follows, and a ton more follows. Nobody seemed to be able to get a musky do anything other than escort the lures back to the boat.

After lunch, I varied between fly and conventional gear while Randy and Scott stuck with the casting stuff. Eventually, I grabbed a small bulldog that was gold in color with a bright orange tail. That netted me a couple more follows but no commits. Scott had another follow on a black tube that was covered in weeds. That fish looked like it was about to hit but, once again, he pulled it right out of the water. Oy Vey!

Aside from that, it was the same story as earlier in the day. Follows, follows, and more follows.

The real story of the day were the bees. There were a TON of bees out there and they sure seemed to be rather attracted to me for whatever reason. With no wind to speak of, they were out in full force. I managed to get about six of the ones who wanted to buzz my face. So, to sum it all up, Randy caught a fish, Scott played take away, and I killed bees.

The final tally was 11 follows, 2 boat side attacks, and 1 fish landed. Apparently, we missed the memo about the musky escort day.

Since all you musky only wanted to show me your back, I'll show you mine. Take that!