Throwing Away A Top 3 Finish

For the 4th time, the Northeastern Wisconsin Great Lakes Sport Fishermen (NEWGLSF) held their annual three day salmon tournament over the 4th of July weekend. I learned about this tourney last year and with the new kayak this year, I decided to enter in the kayak division.

The tournament started at 12:01am on July 4th. Since I have a wife and little guy that I really wanted to share the holiday and see fireworks with, I decided not to fish the 4th. Instead, I spent the day with them, watched the fireworks, and then hit the road around 11 on the night of the 4th. I arrived in Manitowoc, WI at about 2:30 in the morning on the 5th. I slept in the truck for about forty five minutes before I was woken up by a knock on my window. I was fishing with one of the Hobie Kayak Regional Prostaffer's, Colin Belle, who had been fishing since the 4th. I quickly gave him the finger for waking me up after I just drove all night and only had a tiny bit of sleep. Then I got out of the truck, stretched, shot the shit, and game planned it with him before we hit the water. 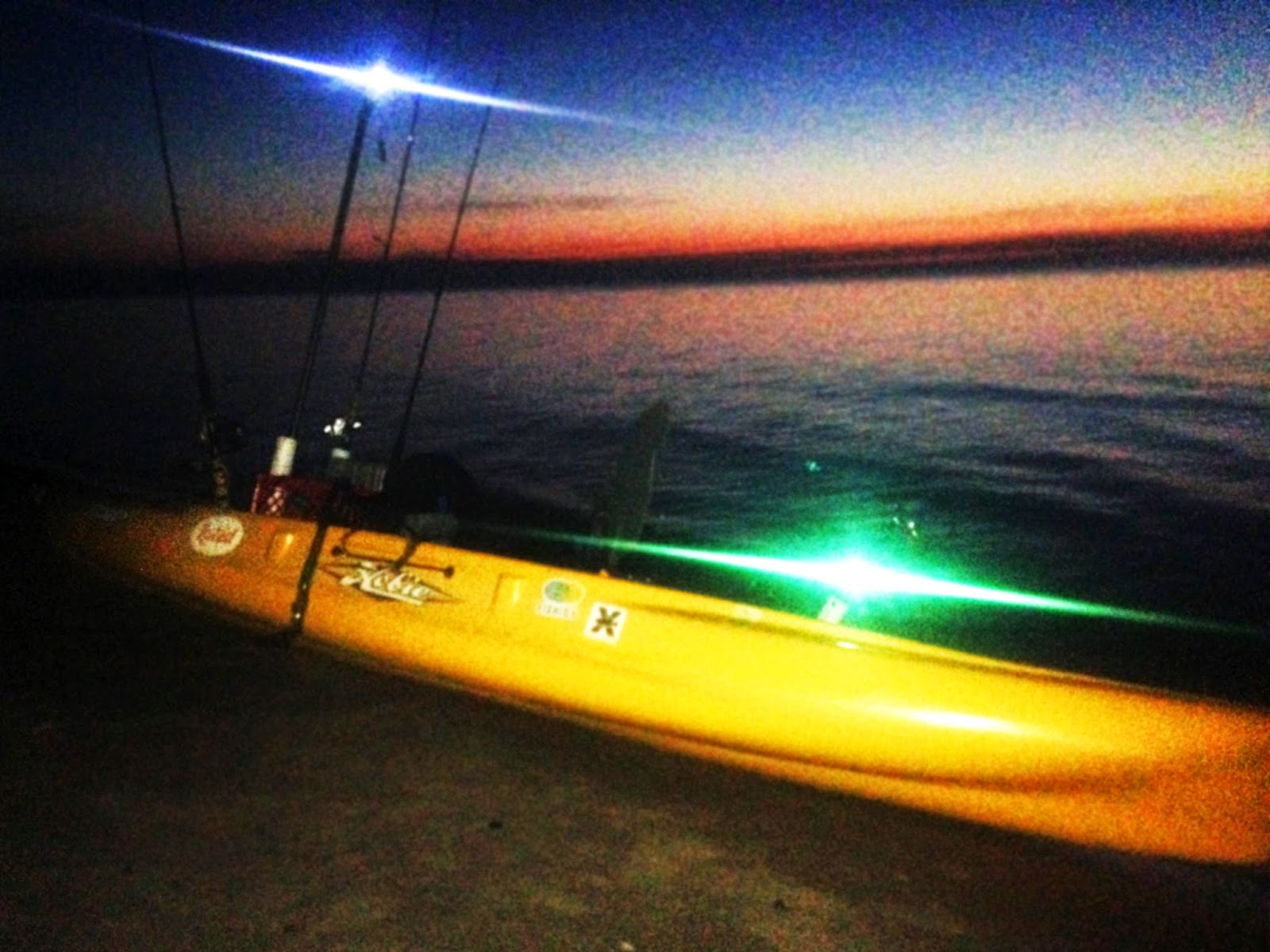 We arrived to the launch around 3:45am. While being bombarded by mosquitoes, we loaded our gear in the kayaks, and pushed off from the beach just as the sun began to peek over the horizon. The lake was amazingly calm and peaceful. There was an extremely invigorating crispness that radiated from its waters. I took a few deep breaths of cool morning freshness and felt ready to go. Who needs coffee when you have this to get your blood flowing? (I still wouldn't have minded an extra large cup) 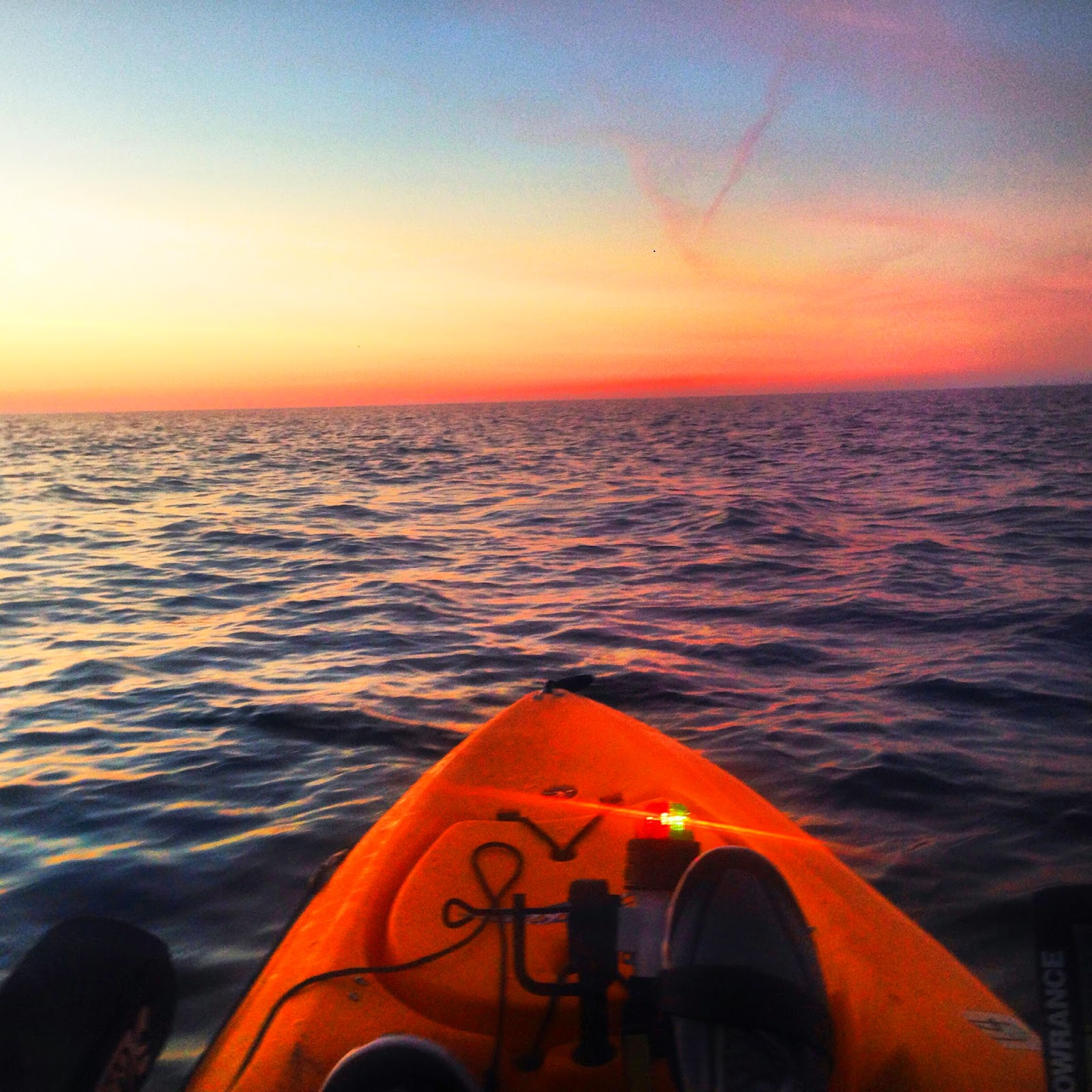 As we peddled off shore, the depth quickly began to increase and the fish finders were showing lots of bait and some nice looking arches so we started dropping lines somewhere around 30'. I was running three baits on two rods - two spoons on one line and one flasher/fly combo on the other. Since the sun was still low on the horizon, I focused on the top half of the water column. Once all lines were set, we just started trolling. 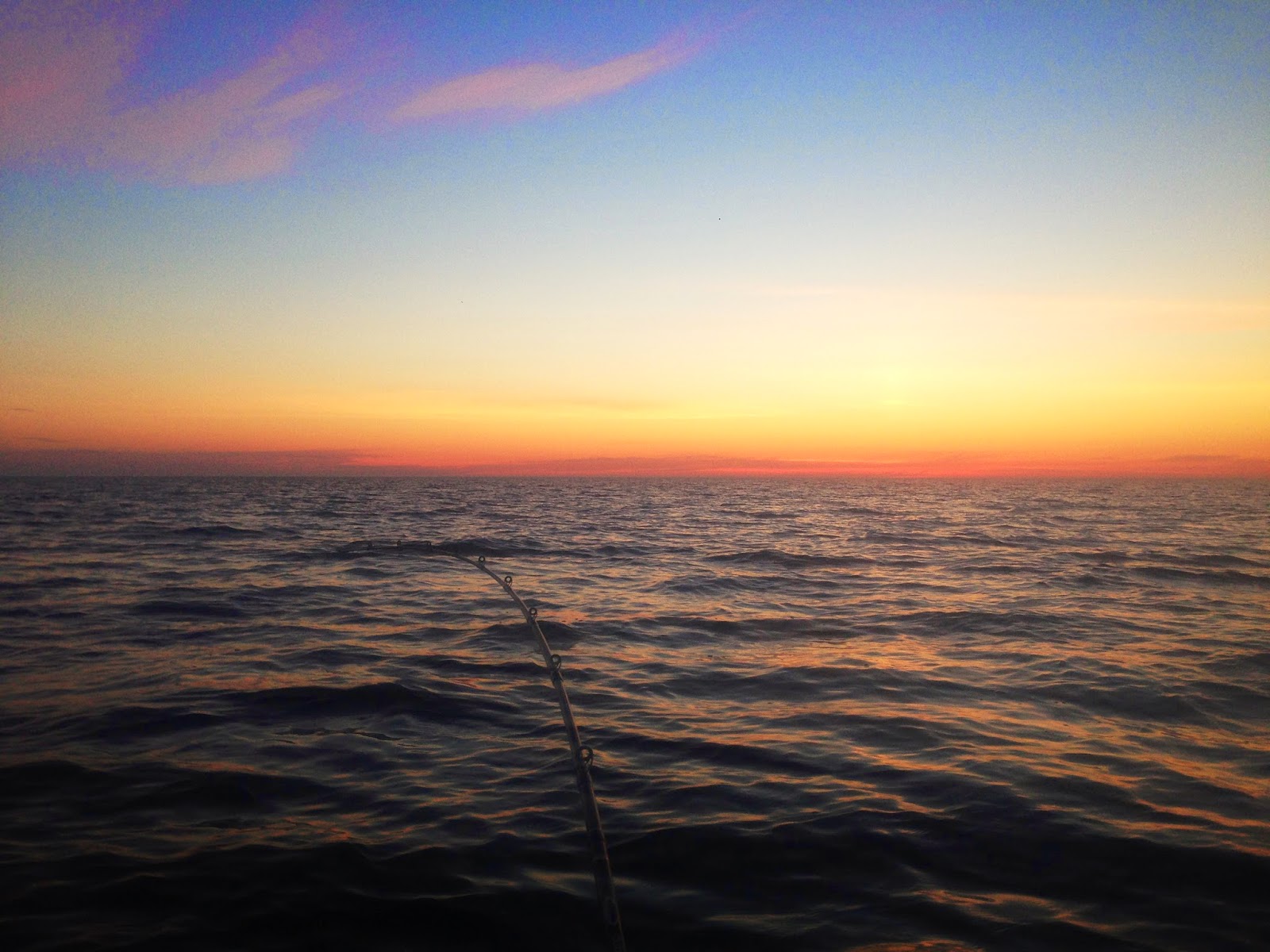 and trolling some more

We certainly weren't alone in the area we were targeting. There were big boats with a ton of lines coming off the back of each one. Some were trolling as shallow as 30' deep and some were way out there over a 100' of water - maybe more. The one stark difference, that I noticed, between them and us was the fact that they were all on a north troll. We were on a south troll. The reason that we decided to troll south at first was because the winds were forecasted to pick up out of the south - blowing north - so we figured that once they did, we could turn around and have the stronger wind at our back when we returned to the launch.

"Well, what if the fish are hitting on a north troll?" I wondered. So, I did what I do every time I am out fishing; I observed. Since I didn't see any nets in the water from all the big boat north trollers, I felt OK with our theory.

For the most part, we stuck to the plan. We would take some east turns here and there to get us out into deeper water, but overall, we headed south. Between 30' and 90' of water, I was marking bait and fish. I made my way out to a 130' of water for a bit, but I just wasn't seeing any life on my sonar so I went back to 90' or less.

I continuously played around with depths, speeds, colors, lure types, and everything else I could think of. It was now around 10:15 in the morning and I had covered miles upon miles of water without a thing to show for it. I had a theory that all of my lines were simply too close to the kayak and the fish were boat shy today. Now, I'm not sure if that was actually the case but I decided to start trolling a third rod. Since WI regulations say that a single person can only have three baits in the water, I pulled one spoon from my two-spoon line. On my third rod, I tied on a two ounce keel weight, a seven foot leader, and a caramel dolphin magnum spoon. I then let out about forty yards of line and kept trolling. About five minutes later, I finally heard the sound I have been waiting to hear for the past six hours.

Wouldn't you know it? It was my third rod that I had just dropped in the water! I grabbed the rod and made sure the hooks were set in the fish. While doing that, I also reeled up the other two lines so I could minimize tangles. The fish on the end of the line felt OK but it definitely wasn't the twenty plus pound king salmon I was hoping for. A few minutes later, I pulled in a 22" lake trout. It wasn't huge but it counted. It also gave me some hope and a bit of confirmation that the fish were somewhat boat shy. 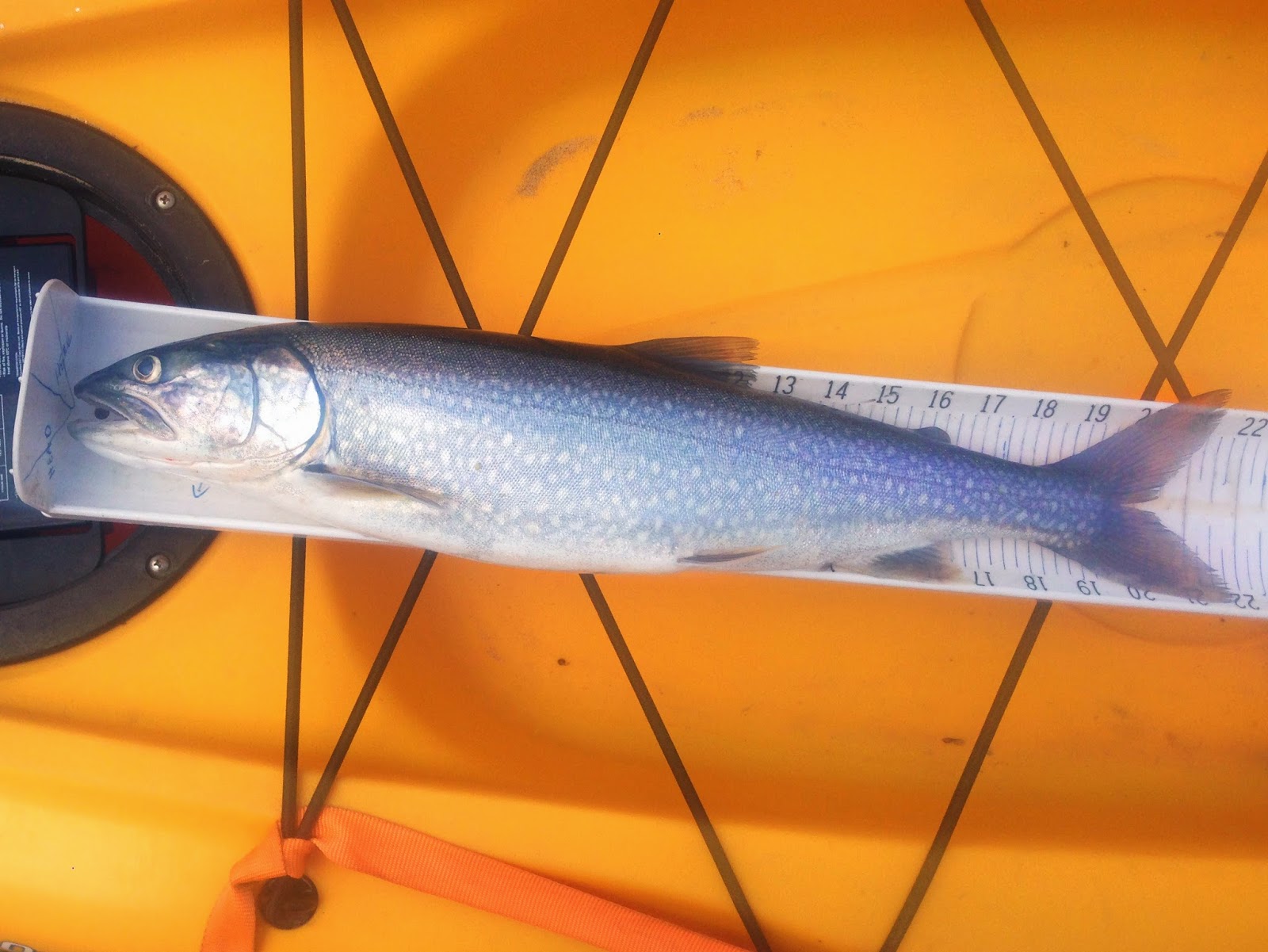 I changed out the other two lines so that I could run them a bit further back and started trolling again with renewed vigor. Around this time, the winds did just what they were predicted to do - turned south. It didn't take long for the waves to start building. Within minutes, the waves were pushing about 3' to 4' with white caps. I was sitting in about 60' of water and had just gotten a voicemail from Colin saying he was headed out to a 170' of water to flat line for some rainbow. I think he had heard some chatter over the radio that people were taking rainbows out there so he started to make the move. I was on fish and bait so I decided to stay put.

Very shortly after that, over 120' of water, Colin met up with another kayak angler named Chad (who is on the Native Kayaks Prostaff team). Chad had just left where Colin was headed and said the waves were horrendous out there so they started to head back in.

I trolled back to about the 40' depth line and stayed pretty close - in terms of north/south - to the launch site while I waited for Colin to get back in. By this time, the waves - even over 40' of water - were brutal. We had been out there for eight hours at this point in time and the marine forecast was calling for seven footers in the next hour. The same forecast was given for Sunday morning (plus thunderstorms) so we pretty much realized that fishing was done for us in the tournament.

It was a holiday weekend and I ditched my family to fish it. Since, I only had one measly laker and heard that a couple of other kayak anglers had some good fish, I decided to call it and head home instead of camping out until Sunday afternoon. I figured there was no point in weighing in my one small fish - let alone spending the next twenty four hours in a tent and not being able to fish - just to find out what I already knew.

My wife and little guy were very happy that I came home. We spent the day doing stuff around the house, relaxing, and playing. Around 1:30 on Sunday afternoon, I get a strange string of text messages from Colin.

"So if you're doing or a write up for this tournament I got to lesson learned for you!"

"Give me a call when you get a chance man"

After spending a minute trying to decipher that string of messages, I called him.

I am still processing my feelings on this so I'll save that for the next post. To conclude this post?

I had fun, learned a lot, and gained even more confidence in my kayak and my ability to catch fish. I also have to give a ton of thanks for Ed at FSA Custom Rods for hooking me up with a ton of lures (pretty much every trolling lure I have to be honest), knowledge, and sweet custom built trolling rod. It definitely contributed to my almost third place finish.

P.S. I just noticed that this is the 300th published post on the site!!!!!!
By BrookfieldAngler
Email ThisBlogThis!Share to TwitterShare to FacebookShare to Pinterest