So fishing lately has been sort of odd lately. While decent enough, finding the target species on any given day has been frustrating. I go for gar, can't find them in the their normal spots, and wind up with largemouth. I go for pike, they are shut down. Go for smallies and the river is blown out. King salmon - end up with a laker. I wanted to shake that streak so I decided to forget all the spots I know and do something different.

I have heard and seen so many pictures of Lake Michigan smallmouth. The approach seemed so easy that it just didn't make sense. From what I have heard and read, you simply need to find rock walls and imitate the invasive gobies that the smallmouth love to eat.  I hit the closest harbor I could find and called that the spot. With me, like many times before, was Teddy Wozny from Lucid Fishing. He has been in the same general funk as me so we both had high hopes for the day.

For tackle, I had really planned on hitting it with the fly rod but the lake was pretty rough from all the boat traffic. The water we were fishing was about 15' deep, too, so trying to get that line down to the bottom took forever. Even worse, by the time it did get down, the current had pushed my fly so off target. It didn't take me long to realize that fly fishing just wasn't feasible this day. Really wanting to get into fish, we broke out the regular bass gear and armed them with some jigs called Tight Rope FireWork Jigs. They are a new and small company based right here in Chicago.  I've heard some damn good things about them so I figured they'd be the ticket. We enhanced the jigs with a Poorboy Darter trailer and started the search for hard fighting Lake Michigan smallies.

It took all of 20 minutes for Woz to start it off when a monster took his jig on the fall. Watching this thing jump and roll around the surface had me so green with envy I could barely stand it. The girth on it was nearly inconceivable. Once he got it in the kayak, I could only wonder how close it was to the state record. Truthfully, before this day, the biggest smallie that I had seen was somewhere around 18" long and pretty skinny. This fish made that smallie look like bait. He hoisted the fish on his grips and it ended up at just a hair over 4lbs and 19.5" long. The current state record in Illinois is 6 pounds, 7 ounces; 22.6 inches. Obviously a bit off but still pretty damn impressive!!

After that got our blood pumping, it got pretty quiet. I finally figured out that our slow bottom bouncing drag approach just wasn't the ticket so I went back to how I've always fished jigs - on the bottom, with a tight line, and small drag'n'drops all the way back to the boat. It only took me a few of minutes of that before it paid off.

The bites were subtle and your reaction time had to be pretty quick to avoid them spitting the jig before you had a chance. I connected with my first about 40' away and fought it to within 10' of the kayak. It jumped on a tightline and I just couldn't change angles fast enough to keep the jig in its mouth. It was a big fish - though not as big as Teddy's earlier one. Ultimately, I hooked up with four more fish today and lost two more of them. Final tally was 2 for 5. One of them came right at me and I just couldn't reel fast enough to keep up. The other one was my fault for not checking the leader and it snapped the line right at the boat.

So who cares about the ones that got away - let's talk about the two that didn't!!

First landed fish for me came on the first twitch after the jig hit the bottom. I felt just a couple small taps and set the hook. It was fish on and it felt good! Luckily this fish stayed in the water and didn't try to go aerial on me. I got it into the Hobie and was thrilled. It was no giant 19.5 incher but chances of landing another one of those was kind of unlikely - everything else that we had seen that day was in the 16" to 18" range. This fish ended up at 16.75" and weighed right around 3lbs. 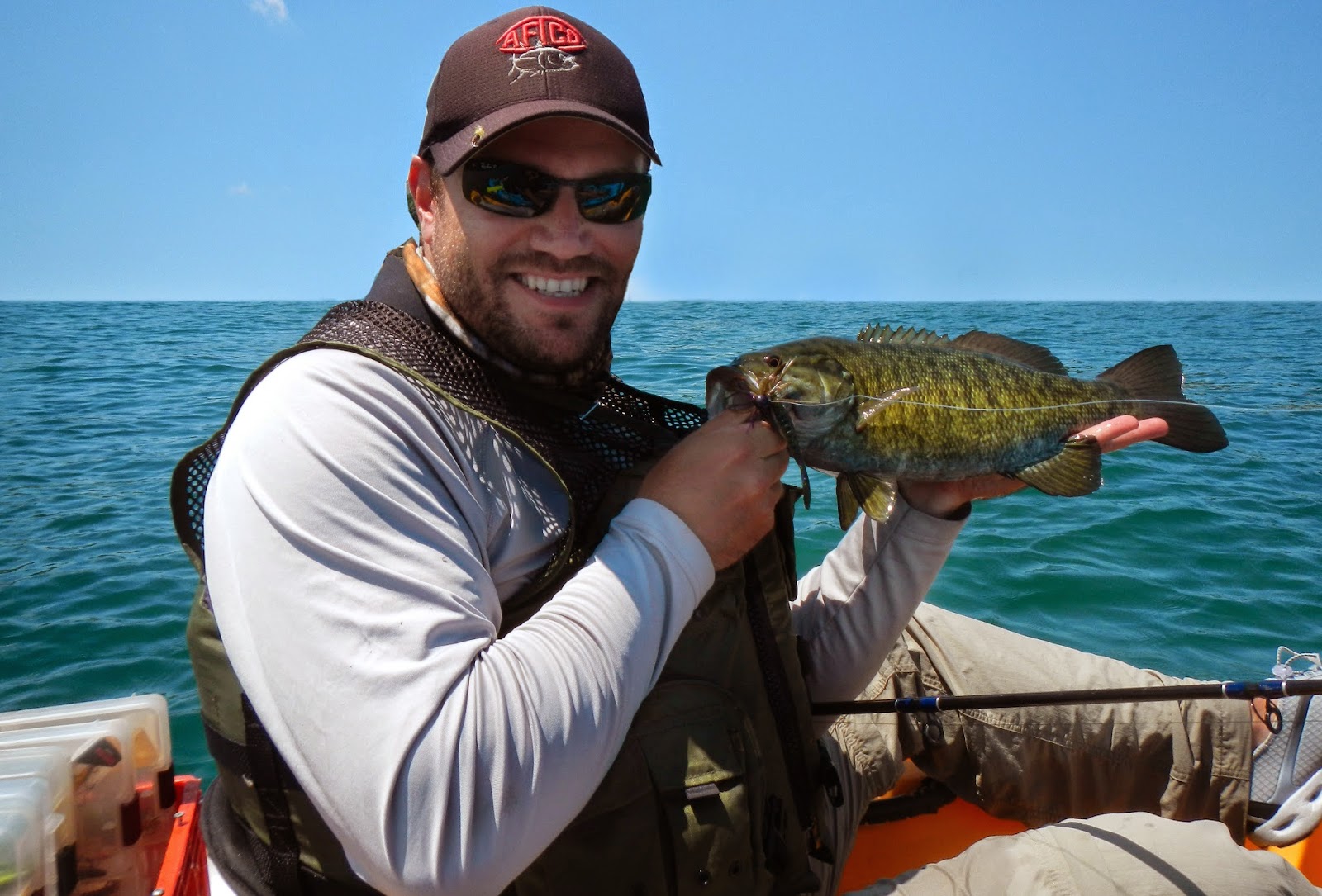 The second fish hit about halfway through my retrieve. It grabbed the jig while I had it tightlined but it was still a very subtle take. I set the hook and raced to keep up as it was coming right at me. NOT THIS AGAIN!! Luckily it turned as soon as it saw my kayak so I was able to really get some pressure on it.

And then it jumped.

Holy crap this thing was huge!!! By now, I had a small audience of people walking along the lakefront so I felt even more pressure to get it in the boat. Now that I had it close, it decided to really make me work for it. Just when I thought I'd be able to get a thumb in it mouth, it decided to go under the back of the boat which really made me wonder if I'd be able to hold on to the rod for a second. With some awkward twisting and bending, I got the rod on the other side of the kayak and was able to start reeling again. Then it came up again and right back down the other way. You son of a mother!! The good news is that it was now on the right side of the kayak which is my preferred side to land fish on. I grabbed my Lucid Grips, opened up the jaws, and clamped on. YES!!!! I yelled as loud as I could!!

At this point, I can not explain the excitement. It's girth was huge, it was long, and just full of awesomeness. I wasn't exactly sure of its size but I knew it was a new personal best.  I gave it a quick weigh and it came in right at 4.5lbs. I then pulled out the measuring board and it was 20" on the money. If I pinched the tail, I probably could have squeezed another 1/2" or so but I didn't care. This fish was incredible. 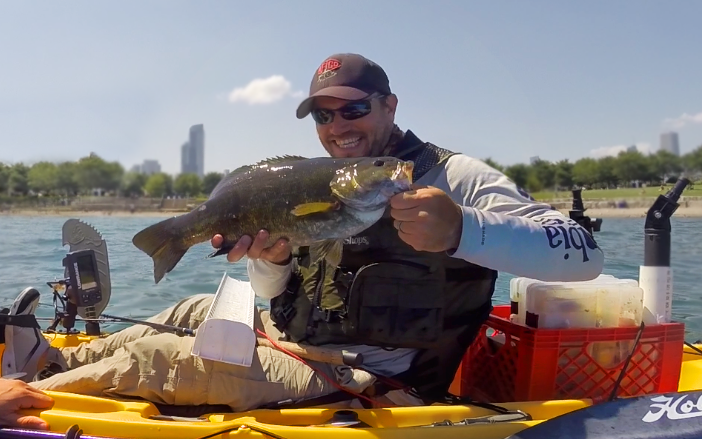 I think the look on my face says it all! I admired it for as long as I could before slipping her back in the water. She regrouped for half a minute before confidently heading back to the bottom. 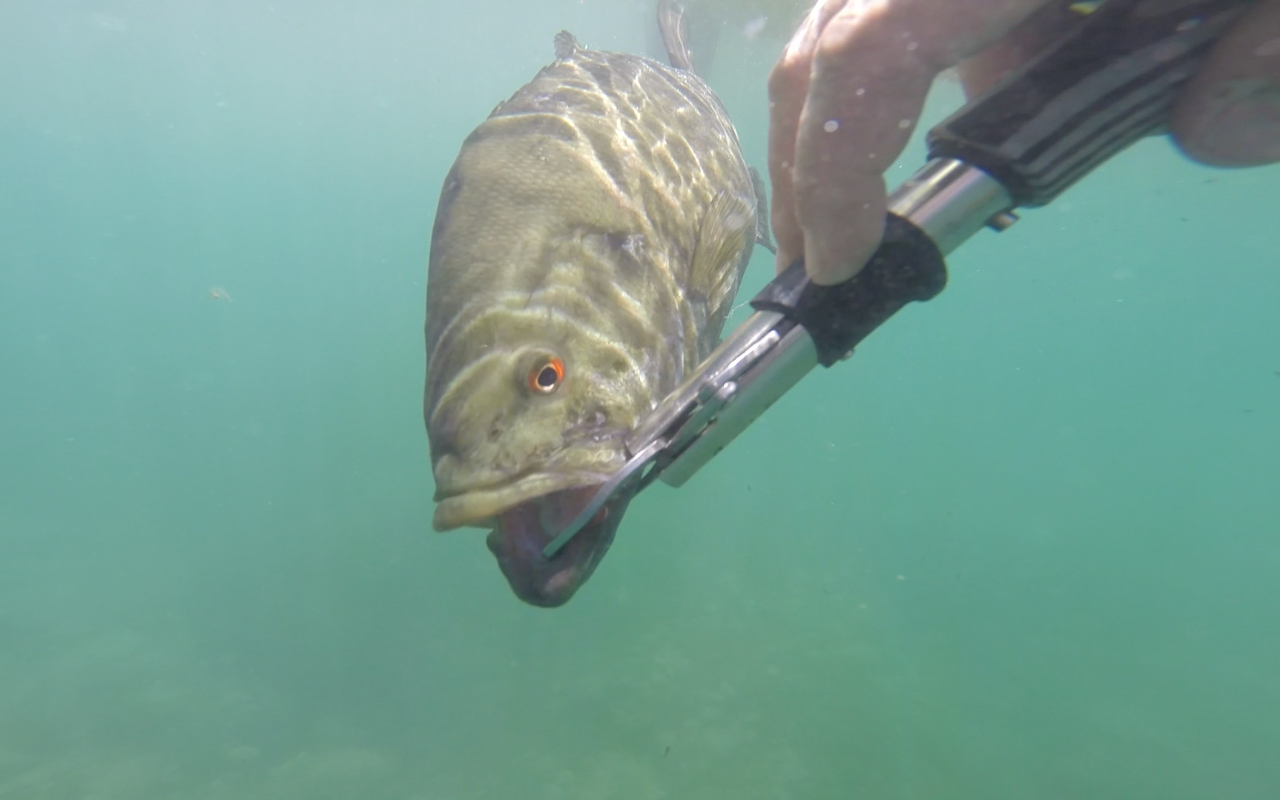 Amazingly, there are bigger ones here and I completely intend on finding them!