Fishing Mazonia For Longnose Gar With A Side Of Bass

Mazonia consists of roughly two hundred different "water impoundments" that are as small as 3/4 of an acre and as large two hundred acres according to the IDNR website. The land that these various bodies of water sits on is actually owned by Commonwealth Edison. Thanks to a long term lease agreement between COMED and the IDNR that dates back to 1981, it is open to the public for fishing, waterfowl hunting, and a variety of other activities.

Until Saturday, I had never fished the area despite a lot of reports from friends and on various local fishing forums. It had always been too far of a drive to really dedicate any time to a place I knew nothing about. Since the move, it's only a forty five minute drive which puts into range!

I was in search of some active longnose gar and heard that one of lakes in Mazonia holds a ton of them - some really big ones too. There is actually a site dedicated to catching gar so I checked out some reports from years past at Mazonia. Several mid to upper forty inch fish definitely confirmed what I had been hearing so I was excited to go after some monsters.

I have successfully targeted and caught plenty of gar in the past. It has been a couple of years but after a bit of digging, I was able to find some lures and flies that I specifically made for catching them. They were all variations of rope lures and flies. The problem with those is that untangling the rope from a gars teeth after the catch is a very tedious task. Instead of using them right away, I started off with more conventional lures and flies. The first fly I used was an electric blue over white clouser minnow. I've accidentally hooked gar on clousers before so I figured it was a good fly to start off with and it didn't take long to start getting some action on it. The first hit came within minutes but I could tell right away it wasn't a gar. Instead, it was a bass that was just shy of fifteen inches. 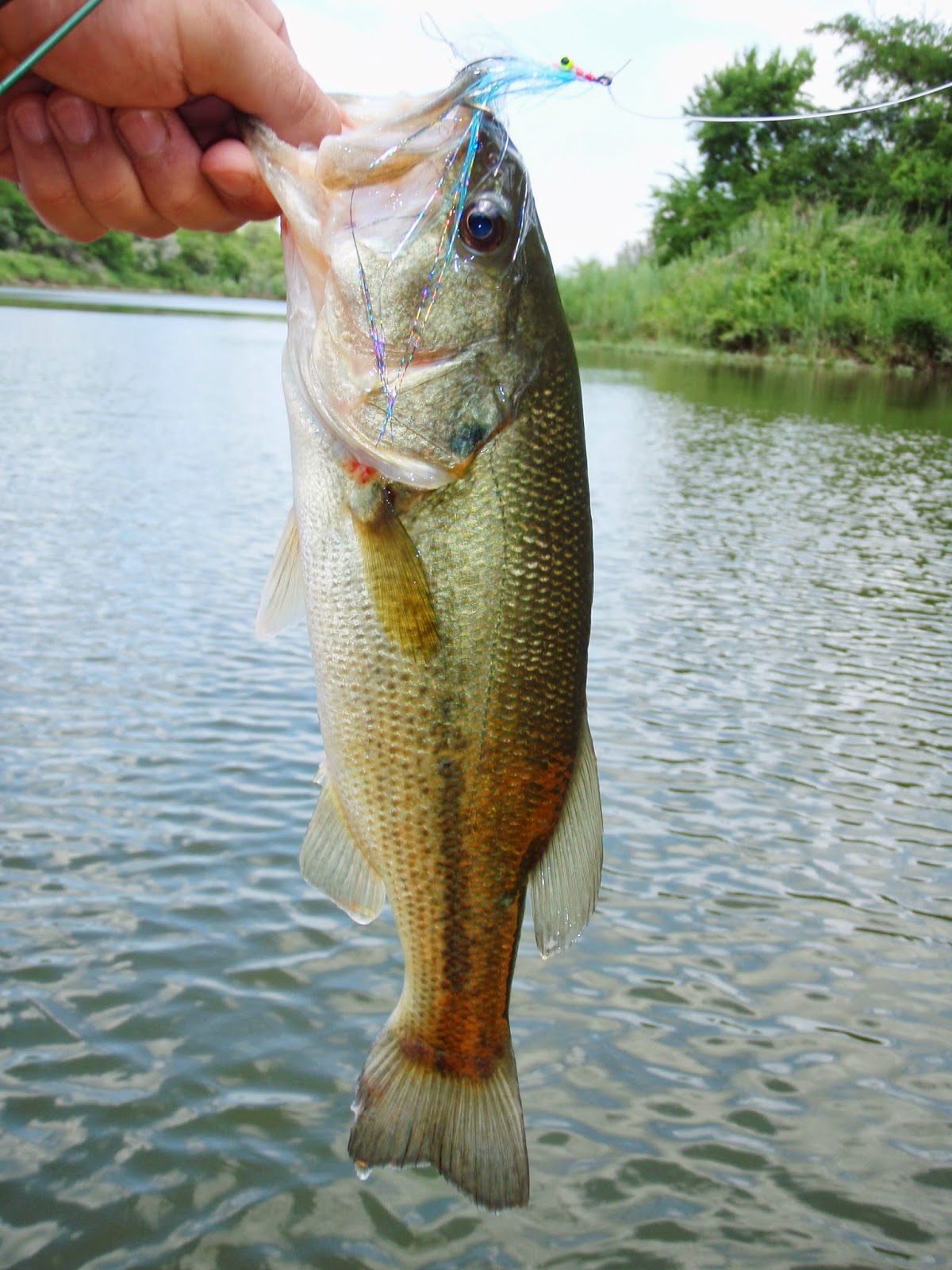 Fun fish and all but it wasn't the target I was after and not long enough for any Kayak Wars points. A while later, still casting the same fly, hit number two was a gar! I had full control over it for about thirty seconds as it worked hard to swim in a giant circle around the kayak. It wasn't really pulling away from the kayak and not really coming towards me...just going around the kayak. It had completed almost a full lap until it got smart and headed right towards me. I couldn't keep up and lost tension on the line which meant I lost the fish.

That's the problem with gar, their giant beaks full of needle like teeth is nothing but bone. Trying to get a hook to penetrate is the biggest challenge. When they run directly away from you, it gives you a chance to hook it in the corner of the mouth instead of just the bony beak. When they stay parallel to you or come right at you, that chance is gone.

Back to casting, I get another good hit and once again, it's a bass. This one looks a bit bigger so I'm hoping it will be sixteen inches or better so I could get some points. 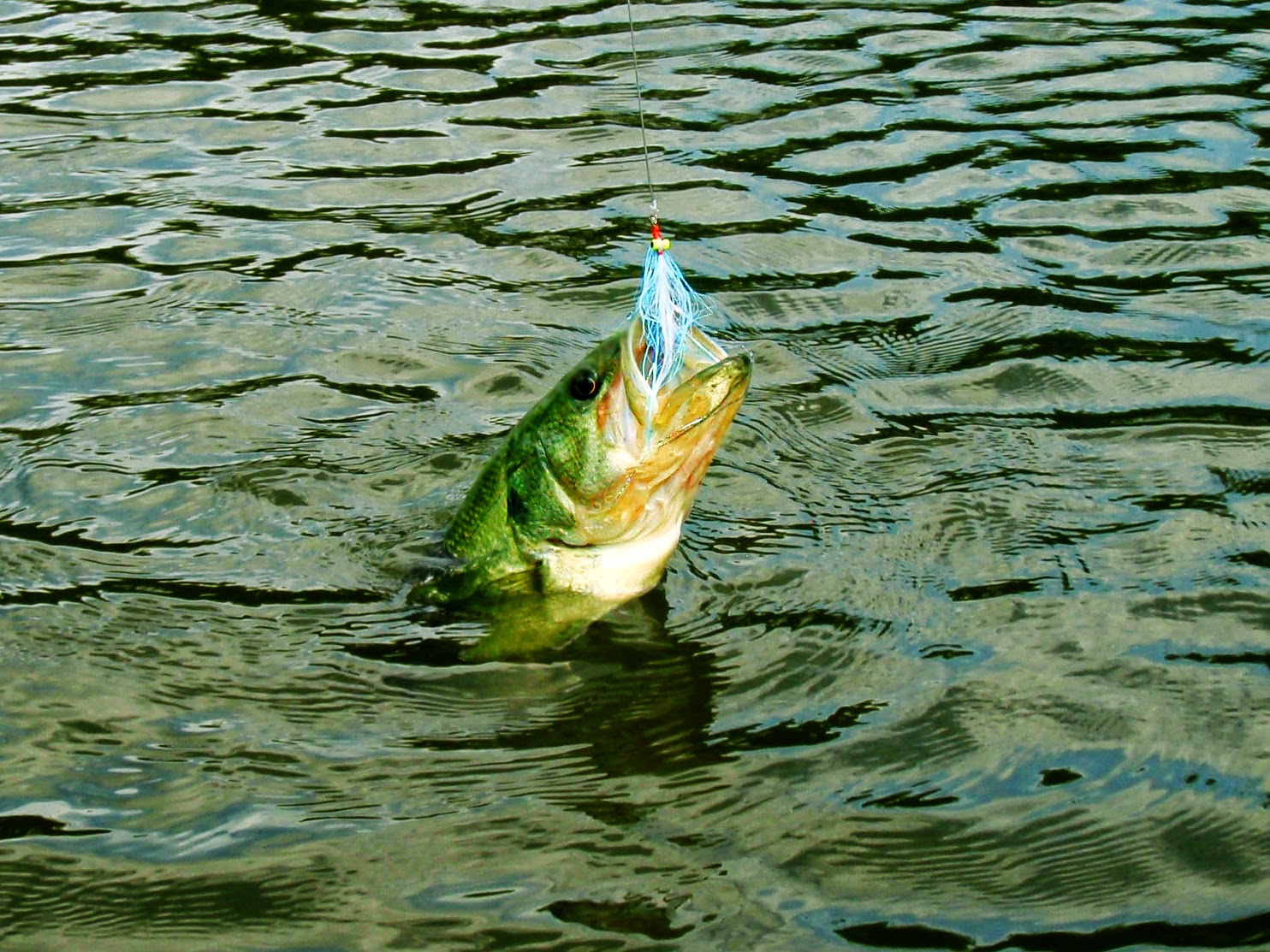 Over the next twenty minutes, I had two more shots at gar but just couldn't keep them on the line. I had the second one pretty good but the line had raked across those teeth too many times and broke. This marked a good time to start plan B.

Plan B was conventional bass gear. My 7'6" medium heavy rod gave me a ton of backbone and a tip just soft enough to deal with some headshakes. The reel is also a 7:1 gear ratio so I am able to reel fast enough to keep up with a fish coming right at me. I only know this to be true because this is the combo I have used to catch gar on regular lures in the past.

For my lure, I decided to go with a white chatter bait from a lure maker in Rockford, IL called Bass-ett Baits. I have had gar hit plenty of hard pounding spinner baits before so I felt that the chatter bait would be pretty effective as well. Plus, in all honesty, I was really enjoying the constant bass action that was so close to that magic 16" that I needed so I was hoping a big loud lure would pull the slightly bigger fish out.

It didn't take long for the first strike to come. Yet again, it was indeed a bass and not long enough for any points. It missed the mark by an inch and half. Ugh For the next hour or so, I decided to do nothing but sight fish to visible gar. This definitely increased hook ups but I absolutely couldn't get any of them to the boat. I did manage to hook up with another bass however that bolted past a gar in pursuit, and snatched the chatter bait right from it's mouth. It was an awesome hit to see take place. Yet again, however, not 16"  - only 15.25" 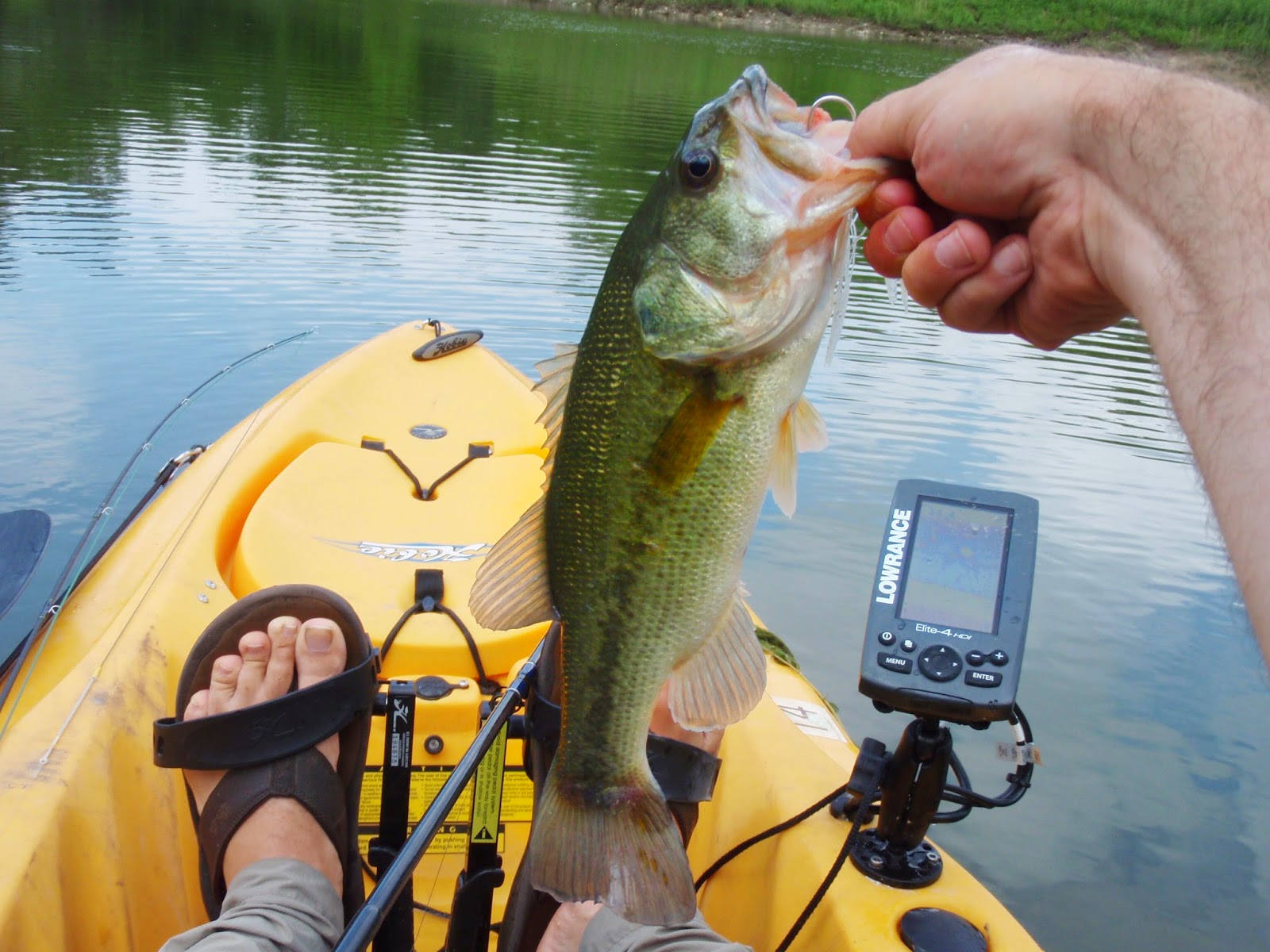 By this time, I was getting a little frustrated with not landing a gar so I broke out the old rope lures. I gave it some time just blind casting without any fish so I went back to sight casting. Despite some perfectly placed casts, there seemed to be no interest in my rope lures.

"Perhaps they would like a slightly smaller rope fly" I thought. My theory was that the action of the fly from stripping instead of reeling would be enough to entice them into snapping. I tied one on and got back to picking my targets. The rope fly did indeed get more attention but not enough to actually get any strikes. I changed my retrieve speed and pattern at least 20 times hoping to get something going but they just wouldn't bite.

It was right around 1:30 at this point and I told my wife that I would be home around 4 so I put the fly rod down and grabbed the chatter bait again. I slowly pounded the shoreline on the way back to the ramp. There was almost no action the entire way. Earlier in the day, I was in the back cove of the lake and that seemed to be the spot with all the active fish.

Just before I made it back to the dock, I saw a nice canopy of algae that sat in about 4 feet of water with instant access to clear deep water. I knew there had to be a fish under there so I made one more cast. The chatter hit just inches in front of the muck and dove right under it. The line made a slight jump so I set the hook into something big. I could have sworn it was a gar when I caught my first glimpse but wasn't sure. It was coming straight at me from the moment I hooked it so I was never able to put any downward pressure on the fish - only straight at me and up. (Side note: This is exactly why I prefer to stand in my kayak. It's just easier to change angles on a fish when I'm standing.)

Unfortunately, I was sitting down and as I was stuck reeling in as fast as I could with only upward pressure on the fish, it launched out of the water. It's entire body cleared the surface by a good foot before the lure came right at me without a fish attached. I can only estimate by what I saw as the fish was out of the water, but this fish looked to be pushing low 20 inches. Its mouth looked like I could have used it as a cup holder for a coffee mug. As always, the one that got away will haunt me!