What a day!! I have never really targeted walleye before. I've caught them here and there fishing for other things, but never have they been my main target species. I did a bit of research and reached out to a buddy who almost exclusively fishes for them and does pretty well in the Illinois Walleye Trail. I picked up a bunch of gear plus three main spots to focus on.

Myself and two others were all car pooling up there and had to be to registration by 5:30am. I wanted to get there by 4:30 to get the kayaks unloaded and set up so we could hit the water right at 5:30. This meant we had to leave my house at 2:50 in the morning. I really didn't feel like loading the kayaks that early so we loaded them up the night before.

Everyone woke up in time and we were completely on schedule. We arrived right at 4:30 just as I had hoped. This could be a good sign!!! We got the boats in the water pretty quickly and just tied them to the dock so we could go as soon as the tourney officials said "GO."  I also learned another use for my Lucid Fishing Grips! Clamp them to a cleat and they hold a kayak with ease!! 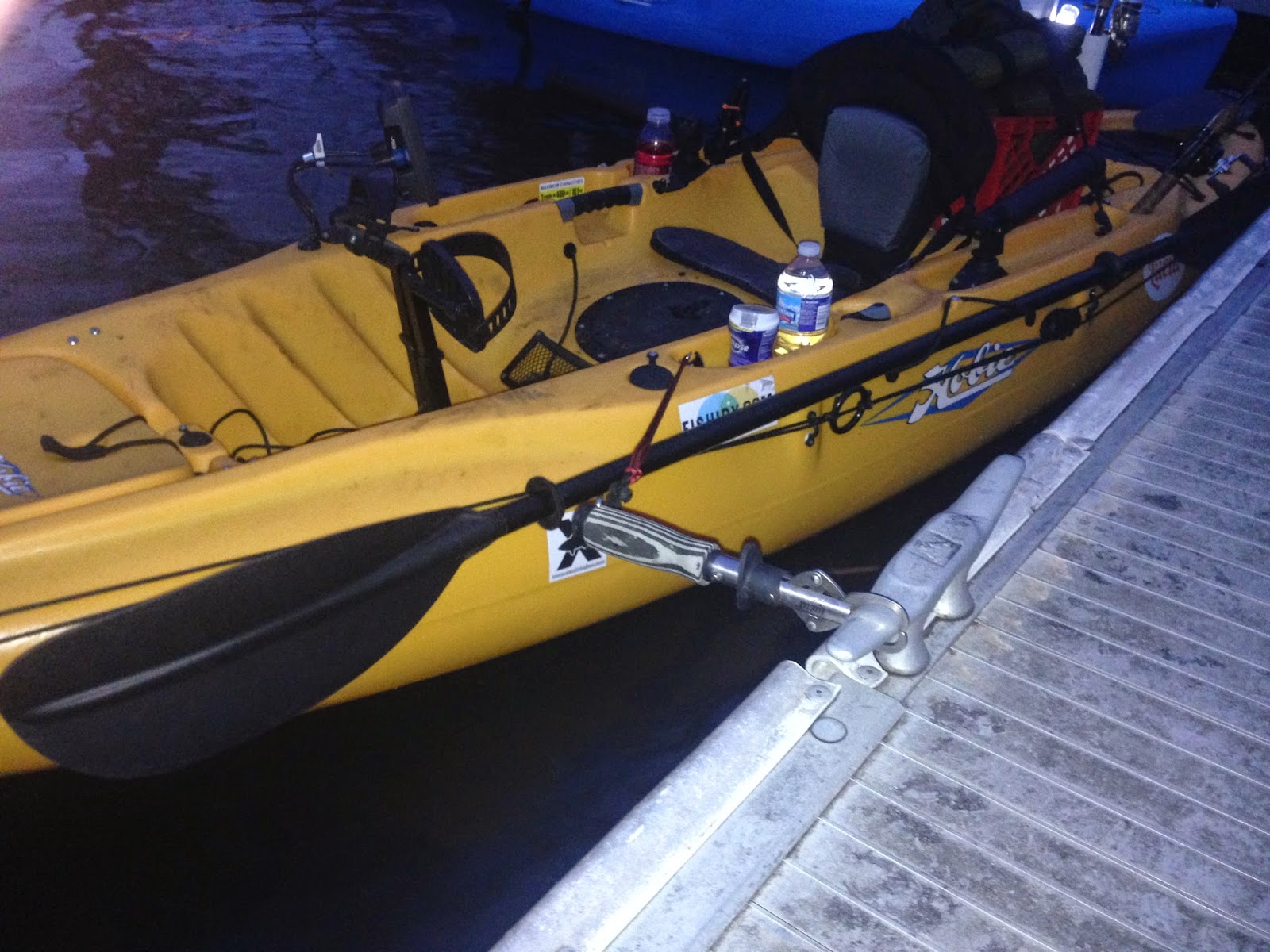 As we were leaving the launch, I took a mental note of the nice breeze. Not too strong or too cold...just....nice. That turned out to be a a very wrong thought. What I didn't realize is that all the houses and buildings around us were blocking the vast majority of those winds. Once we got on the main lake, the winds were FIERCE!!! White caps were ripping across the entire lake and naturally getting to the spot I wanted to start at meant those white caps were pounding into the side of the boat for two miles.

By the time I got there, I was soaked! The good news is that the sun was starting to come up so I wouldn't be too cold. Also, the spot offered a bit of shelter from the wind...but not much. I had two rods going almost the entire time. Both were set up with three way swivels and had a jig head tipped with some minnow imitation plastics which served as a dropper to hold everything on the bottom. Both lines also had a three foot piece of line coming off of the other section of the swivel.  On one of those set ups, I had an unweighted aberdeen hook with another minnow plastic. The other set up had a J-7 Rapala. These set ups are exactly what my walleye tournament fisher friend had suggested.....

....and not a single walleye was landed. I know I missed a few bites but what they were, I just don't know. Could they have been walleye? Possibly, but judging by the three catfish that I caught instead, I have my doubts.

With only an hour and half left before I had to get back to the launch for check in, I decided to start heading that way and fish a spot known as Eagle Point. Now, the waves and wind were pretty bad when we first started. Well, they were even worse now!! Two and half to three footers pounded the boat from all different directions and came at such a rapid pace. It was literally one after another. I took quite few of them completely over the side. The first one was so unexpected that when it came over the side and completely soaked me, it literally took my breath away. The water was only fifty degrees and was really quite the shock to the system. After that one though, each of the many that followed weren't so bad. Most guys just headed in but I stayed out in the rough stuff for a bit. I was rewarded with my fourth catfish.

With time running out, I started heading back towards the launch. I had been defeated. I really didn't want to go back as one of the only people without a walleye. I really wanted to be able to, at the very least, have at least one on the board. As I landed and started talking with everyone else who was back at the dock already, I learned that not a single one of those people had caught a walleye either!

There were only three boats left out there and after they had all come back, only two of the three had actually caught a walleye. Second place was won by a single 8.25" walleye. First place had them dialed in and somehow put together fifty inches of walleye. WOW.

So, it was a fifteen way tie for third!! HA HA HA

As we all talked about the day, I heard that two people had flipped their kayaks and one of our friends had to get towed back in because the wind was pushing him backwards no matter how hard he paddled. I really have to hand it to these Hobie kayaks. In every bad condition I have tested mine in so far, it has handled them with ease. There has not been a single time where I ever felt even close to the limits of the boat.

There are still two more stops on the series. The next one is June 14th in Ottawa, IL for bass and the last one is September 6th on Lake Michigan for salmon. Can't wait!!!!

For more info, or to join either of the next two events, you can find them here! There are tons of awesome prizes including a Hobie kayak and cash. Winner of last weekend took home $250 cash a buttload of cool gear including a $180 life vest.