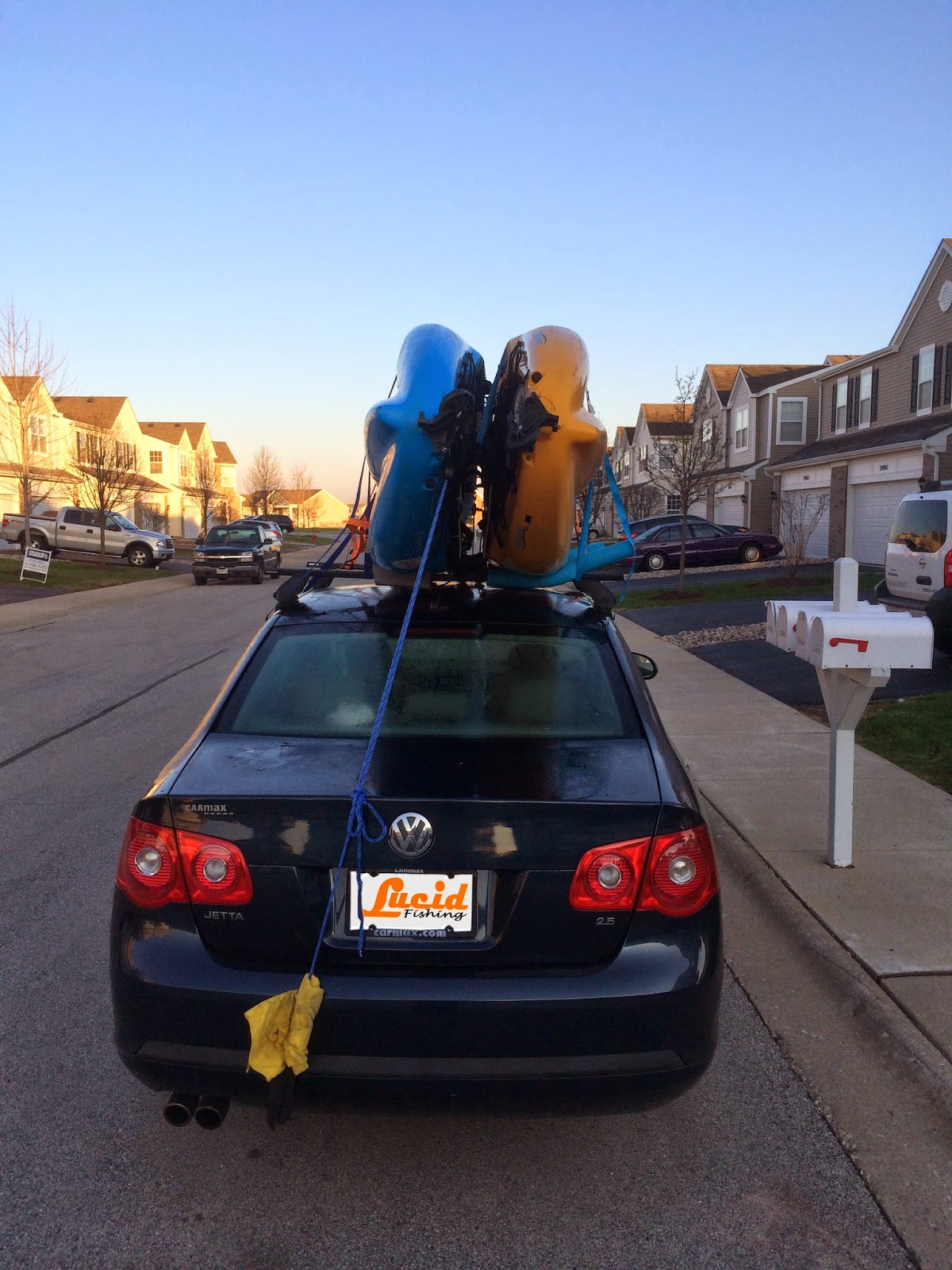 Ultimately, the Lake Michigan adventures in the new Hobie Outback continued on Saturday. I met Woz at his house around 6am to load the kayaks before heading to Indiana for some more salmon. Typically, we just take my truck but we are hoping to save a bit of cashola on fuel this year by taking his VW Jetta. This would be the first time we have attempted to load two kayaks on that thing so we really weren't sure what to expect. Loading took a bit more time than we are used to but once we figured it out, it actually seemed like it would be OK. I have to admit, having two twelve foot kayaks on top of a little Jetta looks quite funny. Apparently, I wasn't the only one who felt that way either. As we drove to Indiana, there were tons of people in passing cars staring, pointing, taking pictures, and even one guy filming this tiny Jetta with two kayaks on top of it. I'm not sure if the two kayaks make the Jetta look tiny or the Jetta makes the two kayaks look huge. Either way, pretty funny looking. As amusing as it was, the system worked great! They didn't move a bit and the car seemed to handle pretty well.

Once we arrived to the area we wanted to launch from, we looked out over the lake and from way up in the parking lot, it looked pretty darn calm! This was going to be great!! Then our eyes scanned towards the beach that I had initially thought about launching from and the full barrel waves had me scanning for different options.  That is the nice thing about kayaks...you don't need a fancy boat ramp or nice flat beach. Just look for a place where the water meets the land and you are good to go! We quickly got everything unloaded, the boats set up, and off we went!! As we peddled out past the break wall, it was very easy to see that the water was not nearly as calm as it had appeared from the beach. The waves were easily three to four footers but unlike previous times I have been caught by some bigger waves, there was a nice spread in between each wave so I never felt uncomfortable. Once the GPS/fishfinder told me I was in fifteen feet of water, I started dropping lines.

Another friend of mine had given me a bunch of his salmon trolling gear that I wanted to try out. I now have a dozen or so flashers/dodgers, some keel weights, a torpedo weight, and a ton of different flies and spoons. I have been reading some recent reports that said small orange dodgers and peanut flies were working so I put one of those on one side of the boat and a Flicker Shad on the other.  As I trolled out to the area that I really wanted to try, I took a little video of the water. I have to figure out how to capture the height of waves to match what real life actually is but you can probably get a decent idea anyways.

Once I hit the area I wanted to get to, I quickly saw some water that was MUCH clearer. Most of the water so far had been pretty cloudy and the cloudy to clear line was very noticeable so I focused my trolling there. The entire clear spot was probably a mile long and maybe a quarter mile wide with a rock wall running the length on one side and open water the other. Right along the wall it was between thirteen to eighteen feet deep and at the outer edge is was about forty five feet. I seemed to be marking most fish in between thirty and forty feet so I really focus on that range. That's also when I started getting some very consistent action. First bite came on the crankbait and it turned out to be a very small coho. I shook him off the hook at the side of the boat and put the crankbait back out there. Ten minutes later, crankbait rod goes off again and it's got a BIG BIG bend in it. I pull it from the rod holder and can tell this is a bigger fish. And then he was gone. So I put the line back out there and continue trolling.

At this point in time, I am at the end of the clear water and am kind of wondering why I had two bites on the crankbait rod but not the dodger/fly set up. As I begin a slow u-turn, I reel up the dodger line and realize the problem....there isn't a fly left on the end of it. Somehow the leader had come off the clasp at the end of the dodger. "Well no wonder why I haven't had anything on this line!" I say to myself. Oh well, I picked a new fly, came up with a way to keep it on the clasp better, and got the line back out there to troll the clear water again. I don't think I was in there for more than five minutes when the dodger rod went off. Quickly reel that one in and it's a small coho. Back in the water he goes.

Continue the troll and the crankbait rod gets another BIG bend in it and then goes loose. Ugh! Two for Four so far and the two landed fish are dinks. Then a minute later, BIG bend on the dodger rod! Quickly get it out of the rod holder and this fish is on! After a nice fight, I heave it into the boat! Finally!  A fish that will get some points for Kayak wars. I took a couple quick pics on the measuring board and back in the water she went. 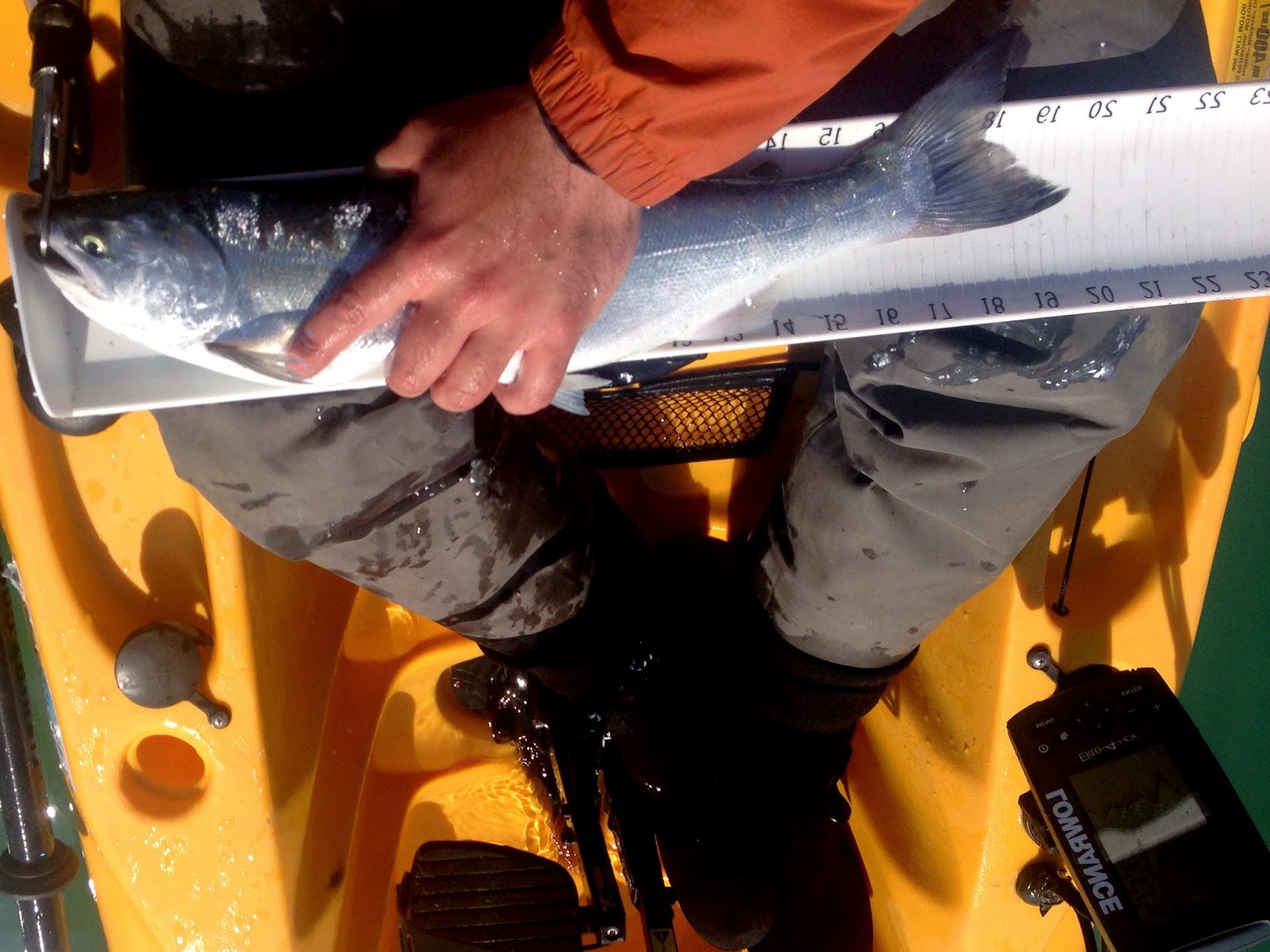 After a celebratory pat on the back for myself, I dropped both lines and started going again! A very short time later, Woz comes over the radio to tell me he is heading in. "Good deal", I respond. "I'll start trolling that way. I turned the boat towards the launch and started my long troll back. Just as the boat was crossing over the clear to cloudy water line, the dodger rod goes off again! The rod is really bent over so I quickly get it out of the holder and start reeling it in. The fish was really splashing around the surface on the way in so I wondered if it was a steelhead. Once I got it to the boat I realized it was another coho that appeared to be a bit bigger than the last but had really wrapped itself up in the line.  It took me quite a while to actually get it untangled and on the board for a quick photo. It wasn't a hard decision to realize that this fish would at best be a delayed mortality fish so I threw in the hull of the boat and filleted it when I got home. Tasty tasty!! 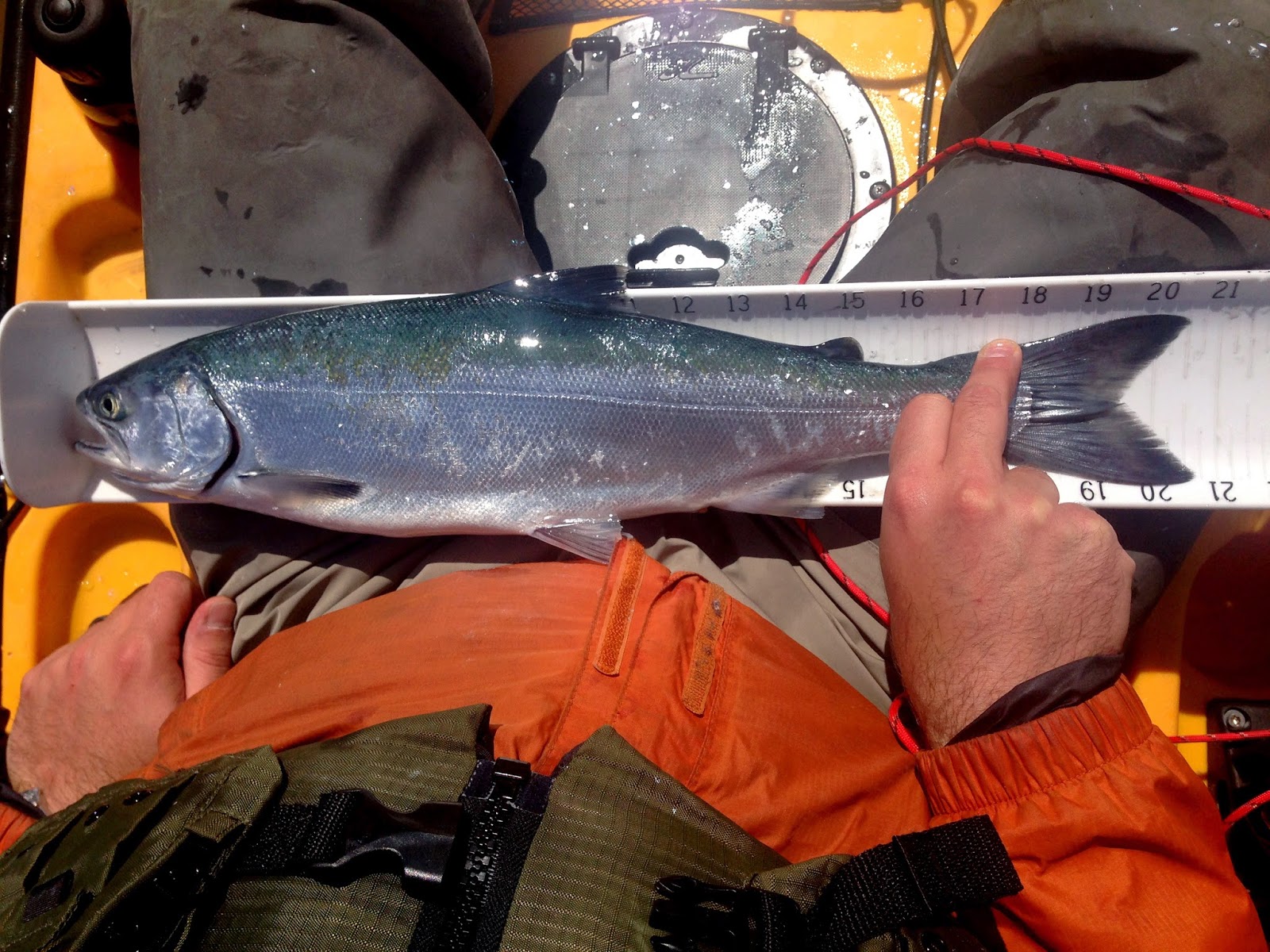 On the rest of the troll in, I had a couple more quick hits that didn't stick but I was pretty happy with the fish count considering we had only been on the water for a few hours. We got the kayaks loaded back on the Jetta and I was home in time to start cleaning for Easter!! This will be the last time I am on the big lake until mid-may. I'll be spending the next couple of weeks targeting some other stuff on smaller inland lakes which also means learning how to fly fish in this kayak! WOOHOO!

All for now
Nick