If you read my last post, I picked up a new kayak for 2014 - a Hobie Outback - and I have been busy trying to get some seat time on it and gain some confidence with it. It's hard going from a kayak that you have bucket loads worth of confidence in to a brand new and unfamiliar kayak. It's even harder when you are trying to do it in water that's only in the upper 30's or very low 40's. It's even more difficult when the water you decide to practice in is none other than big, powerful, and often unpredictable Lake Michigan. But what the hell...go big or go home, right?

So far, I have put right around twelve hours on it in three separate outings and none of them have been what I would call "calm" conditions. The first few hours consisted of a very cold and windy day in Wisconsin. The winds were out of the north and really had the main lake stirred up. Once you got out of the harbor, waves were incredibly choppy, frequent, and coming from all directions. No fun that day and no fish to boot. I mainly stuck to the harbor and got used to this whole peddle power kayak thing.

The next outing was with a couple of friends who also own Hobies. The weather was definitely a bit nicer that day but still produced two footers on most of the lake. We decided to surf launch which meant we had drag the kayaks over the still snow/ice covered beach. 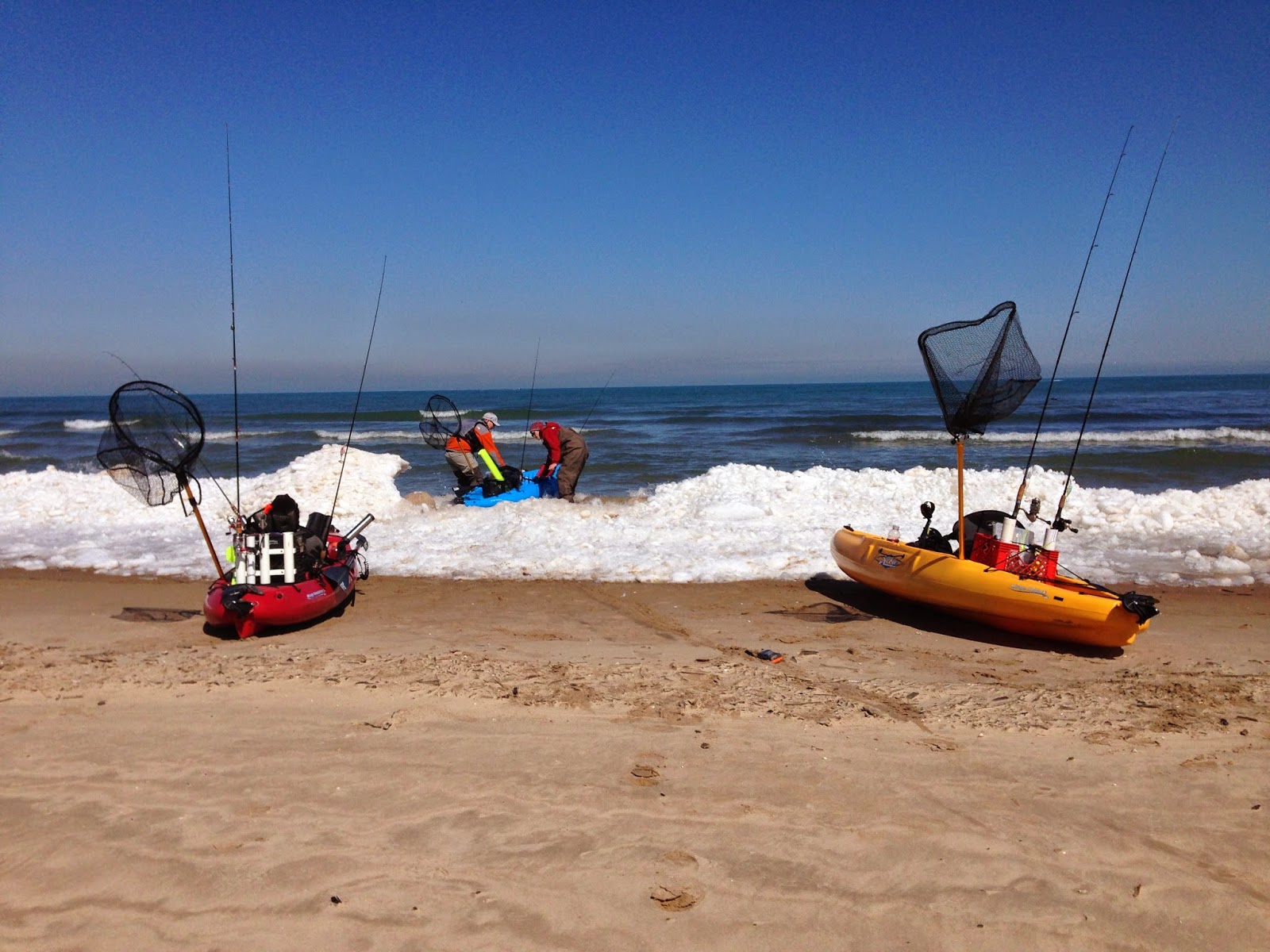 Fishing that day was fantastic though! Between the three of us, we landed somewhere around twenty fish. Most were coho but there was a steelhead or two caught as well. I was able to log a few of my own catches for Kayak Wars which finally got me and my team on the board. The spot we were fishing was about a two mile trip. Once we got there, the waves had picked up a bit but never once did I feel even an ounce of instability on the new kayak. This trip was a very big confidence booster for me. The Outback is touted as a very stable kayak but it took some personal experience for me to really believe that for myself. I also gained a bit of clarity on how I want to set it up for fishing.

Trip number three was with another local Hobie owner who I have fished with a couple of times before. The night before had winds gusting at forty plus miles per hour out of the west/northwest. According to NOAA though, the waves were predicted to be around one or two feet my the later part of the morning so we got a late start. Once the kayaks were on the beach and we were ready to go, the forecast seemed to be pretty accurate so off we went. Fishing was OK this day but not great. It wasn't non-stop action like the last trip but bites were frequent enough to keep us engaged for a solid four to five hours. There was one particular area that kept producing so we really focused our efforts there at the end of the day. At one point, I had both rods going off and managed to bring one of the two fish to the boat. This little double header really made me appreciate the ability to keep forward progress while fighting a fish. Without having to have a paddle in my hand, I can fight a fish, peddle forward and keep the other line from getting tangled up. With my old kayak, trolling two lines was risky proposition that almost surely meant a tangle. By then end of the day, I had landed three fish and missed another three. This also meant more points for Kayak Wars! The winds shifted during the last hour of the day and had the waves quickly building so we decided to call it a day. In an uncommon move for myself, I took the fish I had caught home for dinner. One went to a neighbor, the other to a coworker who will be cooking it up for Easter dinner, and the other will fill my belly. 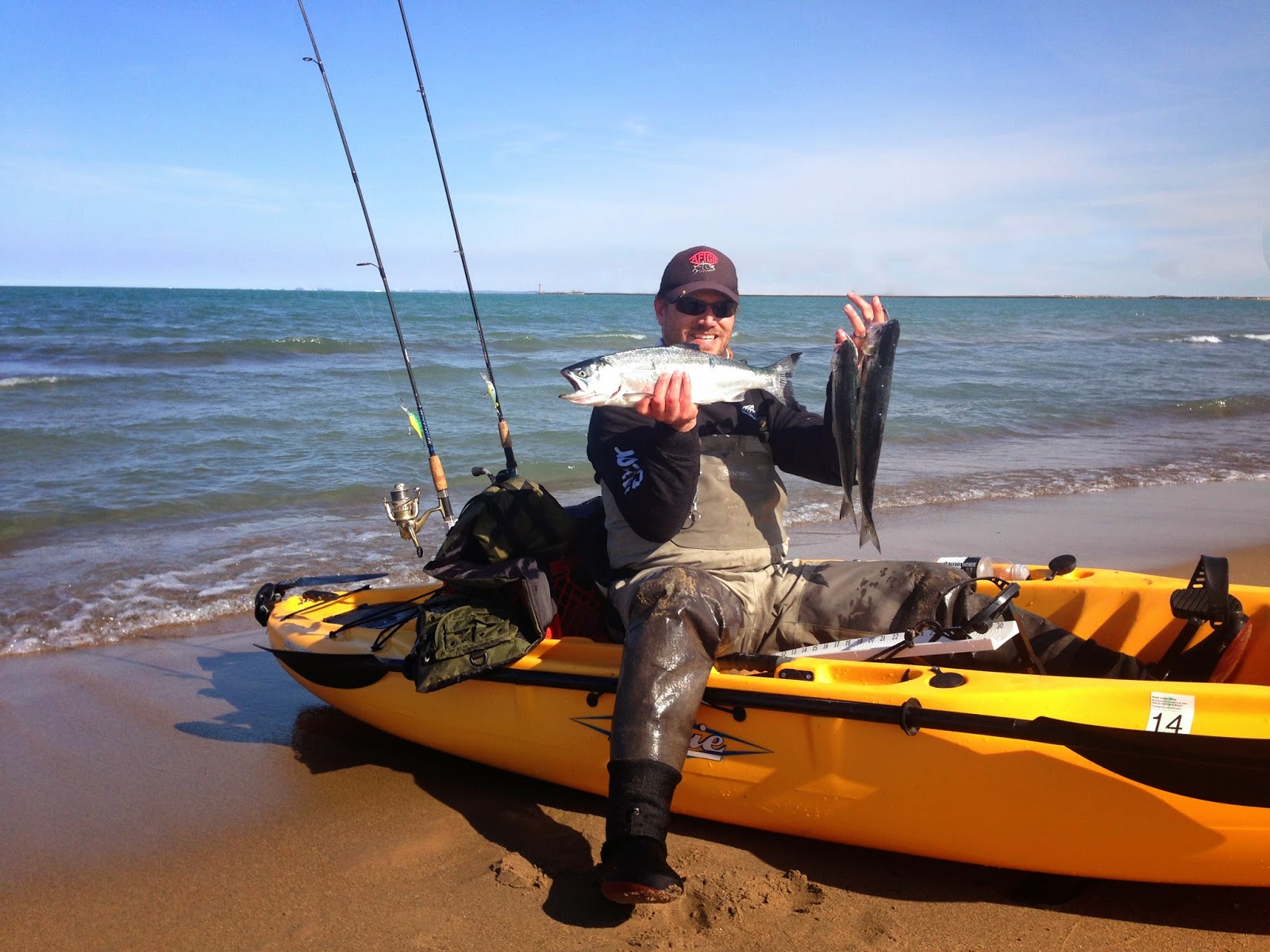 I have taken the time and experience from these three outings to really solidify my plans for upgrades and rigging. Between the second and third outings, I upgraded from the stock fins on the mirage drive to the ST Turbo fins. Talk about a bit difference! I am still on the fence for the bigger rudder but for $35, I'll probably upgrade that as well. I am awaiting a few deliveries that include a new GPS/fish finder, rod holders, battery, and a few other accessories. I anticipate them arriving early this week which should leave time to get everything installed for next weekend!! I am really looking forward to getting the fly rod mounts on there so I can start trolling some flies in deeper water!

All for now and thanks for reading!