A Windy Start Only Got Windier

Fishing this weekend was a bit on the questionable side. I had spent all week finally getting the new kayak rigged with a new GPS/Fish Finder combo (Elite 4 HDI), including all of the various parts that go along with it, and various rod holders. Needless to say, I was eager to get it on the water and put it all to the test. Saturday was amazingly perfect outside but I wanted to take full advantage of it and spent the day at the Zoo and playing outside with my wife and son. So that only left Sunday for fishing.

On the days preceding last Sunday, the forecast called for strong winds, rain and thunderstorms. In other words, not good. Since I was so eager to get out there, I really didn't care about the rain or the winds. The rain is just rain...nothing that a raincoat can't take care of. The winds are somewhat of a moot point because there is always some harbor along the lake that will provide some shelter. The lightning that is often associated with thunderstorms, however, was the only thing that really had the power to keep me off the water.

To make the pressure to get out even greater was the fact that a good friend just bought his first kayak a couple of weeks ago and was even more excited to try it out than I was to test all of my toys. I don't think he cared about the lightning. As a matter of fact, he flat out told me that he doesn't care if has drop it in his pool, he's putting it in water on Sunday! 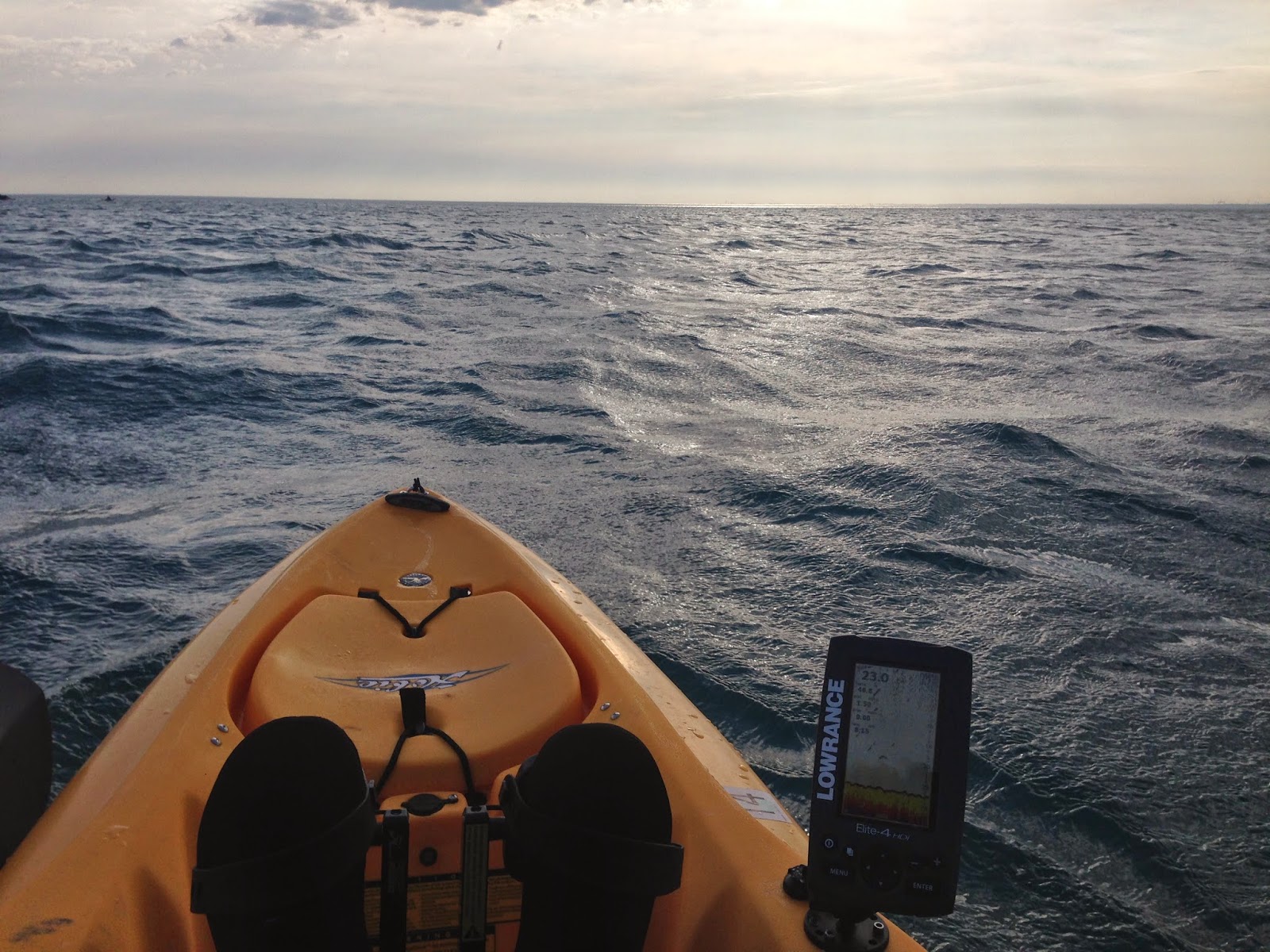 So we anxiously checked the forecast everyday as Sunday drew nearer. Who am I kidding...we checked at least five times every day. Finally, as Saturday night was upon us, it seemed that the thunderstorms, and even the rain, would not be upon us until the early afternoon. The farther south you went, the later those storms would arrive. The winds would be present from start and they were going to be strong according to the weather folks! Luckily though, they were supposed to be blowing straight from the south so the waves would only be rough as you moved away from shore. All of the stars seemed to align so fishing it was!

As we launched the kayaks, the prediction seemed pretty spot on and the waves were merely non-existent at the beach. We quickly got into water that was deep enough to start trolling so we dropped our lines and started our fish catching mission. Where we were fishing had a pretty large break wall to the east that supports various factories and tend to serve as a good funnel for fish. Well, it did last week at least. This week not so much. The wall is about three miles long so we simply trolled along staying about thirty feet off it so our lines wouldn't get hung up in the rocks. By the time were at the half way point, the wind had enough time to build the waves to a good couple of feet. The kayaks were completely stable but I was worried a bit about my friend making the return trip against the wind. His new kayak is not one with the pedal drive so he only had arm power to rely on. I suggested that he pull his lines and see if he would be able to make it back before proceeding any further out. After making very little forward progress despite a pretty fast paddle pace, he decided he would simply focus on the daunting task of getting closer to the launch than fishing. I couldn't blame him.  I, on the other hand, decided to make the rest of the trip out to the end of the wall (another mile or so) where I saw a charter boat continuously trolling in the area so I could only assume he was on fish.

Funny story as I was passing him on the way out, he yells out on his loud speaker "Are you really going out there?!?" "Of course" I yell back. "You must be a moron" he chimes back. I laughed out loud and kept on going.

As I neared the end of the wall, sure enough, one of the rods went off but that ended as soon as started. Oh well...at least I got some action! At this point in time, the waves are getting bigger and the wind seemed to be getting stronger so I turned around to start making my way towards the beach where my friend was heading. The difference was, that I trolled back while he did nothing but paddle. No fishing, no trolling, no anything...just paddling. The scary thing is that he only beat me back to the beach with enough time to pee before I landed. Score one for peddle power! Oh yeah...I happened to land a small coho on the way back in as well and shoot a short video while I waited for one of the rods to hook up.


Once we were both on the beach, we talked a bit about the paddle back in, weather conditions, and came up with a plan for the rest of the morning before the rain was supposed to be here.

The plan basically was to stay closer to the beach and fishing along the drop that runs parallel to the shoreline which would keep us just a quarter mile off the beach. If you start on one side and go all the way to the other side, the whole bay that we were fishing was about a mile and half. We decided to start at one end, troll to the other, and then troll back. Off we went and the action started pretty fast. I had the rods go off another four times before we got to the end and started our turn. Sadly, not a single one of those fish were on long enough to even get the rod out of the rod holder. I call those drive-byes. Anyway, we started making the turn at the other end and all of the sudden, the wind seemed to completely stop. By all of the sudden I mean ten seconds earlier, it was blowing at twenty miles an hour straight out of the south.

At the exact moment that the wind stopped, the temperature dropped by at least fifteen degrees! INSTANTLY! I stopped, looked around, and noticed a huge wall of fog blowing in to the spot where we were supposed to land making it nearly impossible to actually see it. I yelled out, "PULL THE LINES AND GET TO SHORE!!!!!!!!!!!!!!!!"

By the time we got our lines out of the water, the winds had started again and were even stronger than before except that they were now blowing straight out of the north!! Within minutes, the waves hitting the beach were solid three footers and we had to head across the bay which meant they were hitting the sides of our kayaks. My friend couldn't paddle like that for too long so he just turned and let the wind and waves push him straight to the beach. I kept moving across the bay though, taking wave after wave over the side. Amazingly, there wasn't a single moment that I felt like the kayak would tip. To say that it is super stable would be an understatement!! I was able to keep about a four mile per hour pace despite the strong side wind and waves coming over the side of the boat. Pretty impressive!! GO TURBO FINS!

Finally, about fifteen minutes later, I hit the beach without incident and started walking on the beach, towards the other end, to help my friend pull his kayak a mile in the sand. Luckily, he had a cart for his kayak so it wasn't that bad. We got to the other end, grabbed the truck, broke everything down, packed the kayaks and rods in the bed and loaded the rest of the stuff in the backseat before heading home. Just as we closed the doors, the rain started pouring down!! Talk about a close call.

The end of the day concluded as a "great" first outing filled with all kinds of conditions for my friend to learn what his kayak is and isn't capable of. I wish he could have caught a fish or ten but I think the experience was invaluable. It also served as a day of even greater confidence building for me in my new kayak. I am absolutely thrilled with the way I set everything up and the only other additions I will make are adding a larger sailing rudder and some lighting. As much as my friend likes his new kayak, he admitted on the way home that he will be saving his pennies to upgrade to a Hobie. It's hard to argue when you see the way they perform side by side in harsh conditions. Oh yeah...and we ended the day with just one fish in the box.

Nick
By BrookfieldAngler
Email ThisBlogThis!Share to TwitterShare to FacebookShare to Pinterest