Three Musky On The Fly - Two Over Forty

I have been dying to write this post since we got the boat back on the trailer and started the drive back home. Woz (Lucid Fishing) and I met up once again with my friend Randy down in Indiana for some more late fall musky action. As you may know by now, Randy is one of two owners of Predator Pursuit Indiana Musky Guide Service. Randy and I met about three years ago when I hired him as a guide. From there, a friendship has grown and I even run his website and social media sites now. On the rare occasion Randy doesn't have a client, I try my best to make the three hour drive to go fish with him. I have never had anything less than a great time.

Anyways, on to the fishing!!!

The winds were much more tolerable than the last time I was out there so I chucked feathers and fur from about 10:30 in the morning until the sun went down. The fly I was throwing was an articulated variation of the hangtime minnow in a firetiger color scheme. This fly was big, moved a lot of water, and had a ton of flash to get the fish excited and holy crap....did it work!!

The water was right around 39 degrees so I knew it would be a day when the hits would come on the pause. I also knew that they probably wouldn't be willing to chase it down very far. This meant a very simple retrieve that comprised of a single long strip, followed by a two to three second pause. I was about a half hour into the day using this retrieve before I went to start a long retrieve after a pause. That is when I felt as if the fly had hooked into a cinder block. As soon as I felt that weight, I gave the line a hard strip set and lifted the rod causing an eruption forty feet from the boat. HOLY CRAP!!! FISH ON!!!

It was instantly apparent that this was a big fish. Randy and Woz feverishly reeled in their lines. Randy then grabbed the net and Woz went to turn on the GoPro we had mounted on there. The fish was coming to the boat pretty quickly so I politely told them, "Fuck the camera!!" It was in that instant that the fish decided to stop making it easy and tried bolting for the weeds. "OK, I think you guys have time to turn the camera on now". After a minute of getting this fish turned around, I was able to lift his head above the water and Randy got him in the net.

"WOOHOOHOOOOOO!!!!" Echoed across the empty lake. "FUCK YES!!!" I exclaimed! Now normally, I am not a big F-bomb user, but the emotions running through me when I saw the size of this fish were taking over. The mouth was massive, it was long, and had some massive girth. I could not believe that I finally caught a big musky on the fly. After a few more high fives and stuff, we got to work on getting the fish out of the net, free of hooks, and on its way.

It took us a few minutes to get the hook out because the fish truly wasn't done with the fight. We just happened to get it scooped up before he had a chance to really do battle. He had also inhaled the entire thing, so getting that massive mouth of teeth to cooperate wasn't the easiest task in the world. With a bit persistence and coaxing, the fly came out, we snapped a few pictures, put him on the measuring board and realized that I just landed a musky on the fly that was only a half inch short of my personal best musky ever of 44". That fish was caught on a conventional tackle and giant jerk bait. This fish came in at 43.5" and was caught on the fly!! Hell Friggin YES! Oh yeah, I should also mention that this was a fly I tied the night before. That makes it even that much sweeter.

We got the fish back in the water and after a bit of gentle rehab, his tail kicked some water in my face and off he went. This would seem like the culmination of the day since these are musky - the fish of 10,000 casts, right?

Fish on AGAIN! This fish didn't come out of the water, but still made a big bulge on the surface and flashed that creamy white belly my way. So far, this fish was fighting harder than the last by leaps and bounds! "Big fish!! BIIIIIIIGGGG BIG FISH!!" I exclaim!! My FSA Customs built Batson RX8 9wt is bent in half as the fish starts heading towards the front of the boat. Randy managed to pull the trolling motor before the line got tangled. I run towards the front with my rod halfway under the boat. Now back towards the back of the boat and on the other side! Holy crap! This is a chinese fire drill!! While chasing this fish around the boat, I am yelling at Randy and Woz to help untangle the line from my feet and the boat as I feel it taking off once again. I let off a bit of pressure with my line hand hoping that the line will simply slide on all the things it's caught on. Sure enough, the stupidly smooth drag on my Allen Kraken reel starts humming as Randy gets me untangled. I tightened down the line hand once again and finally was able to get this fish turned around and its head up. After about five minutes, three or four complete laps around the boat, and a burning forearm, this fish is in the net!!!!

Once again, "WOOHOOHOOOOOO!!!!" Echoes across the empty lake!!! High fives ensue and my heart is once again pounding! This fish is indeed another big big fish. The fly was firmly planted in the corner of its mouth and came out much much easier than the first. We pulled it out of the net, snapped a few pics, and got it on the measuring board.  41.5"! I was shocked!! If the fight a fish puts up is a scale in which to measure, this fish should have easily been over fifty. In the end, who freaking cares!! This was my second musky over forty inches on the fly in a single day. It just doesn't get better than that!!!!

Anyhow, you would think that this would be the end of the day. You would be wrong! The second fish was caught around 1:30 in the afternoon. A little while later, the sucker rod that we have been dragging around all day starts to scream. I have caught my fair share for the day so Woz picks it up, sets the hook and fish is on! Another ten seconds later.....fish is off. UGH!

Well, back to casting, I lay another nice cast into a few visible lily pad stems and on the first strip, before the fly really ever had a chance to start sinking, the water blows up and it's fish on!! Randy - and I am still laughing as I type this - says, "Are you kidding me?!" He just couldn't believe it! As I am quickly stripping in line, Woz and Randy are preparing for another chinese fire drill. About thirty seconds later, Randy scoops the net in the water and laughter erupts! 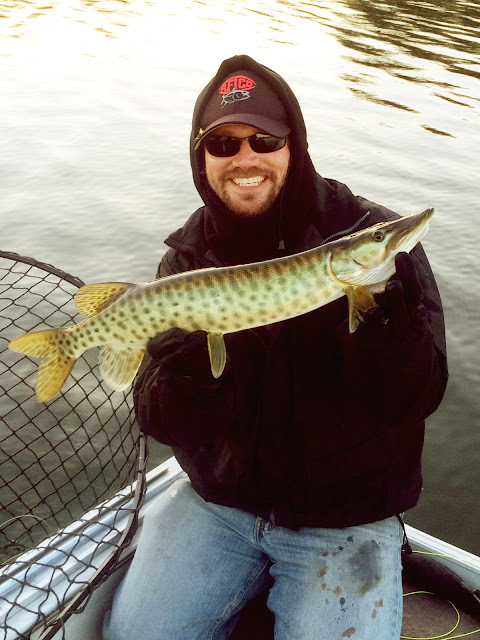 I don't think that fish was any bigger than 26" but it sure as hell had some spunk! I grabbed the fly from the corner of its mouth, snapped a photo, and sent it on its way to go get bigger. I then asked Randy, "How many times have we been out here where a fish like that saves the day?!"

That wraps up my fish catching for that day. After three musky, my fly looked like half the fly it used to be but the sun was fading fast so I didn't bother changing it out.

The day ended on a definite high when I scooped Woz's 36.25" musky into the net making it the fourth musky of the day!!

To put this day into a little box with a bow on it, we landed four musky (three of them on the fly), lost one on a sucker, missed one on the hookset, and had one follow. Good god I love late fall musky fishing!!! Woz is working on all of the video stuff now so as soon as it's finished, I will put up a link so you all can watch!  I think at least one chinese fire drill lap was caught on video!!