Well, I think the new yak is ready for the maiden voyage tomorrow to Lake Michigan for some night time salmon chasing!

A lot of the mods are temporary as I am trying to get a feel for where I want to put things but I think this should work for the night. 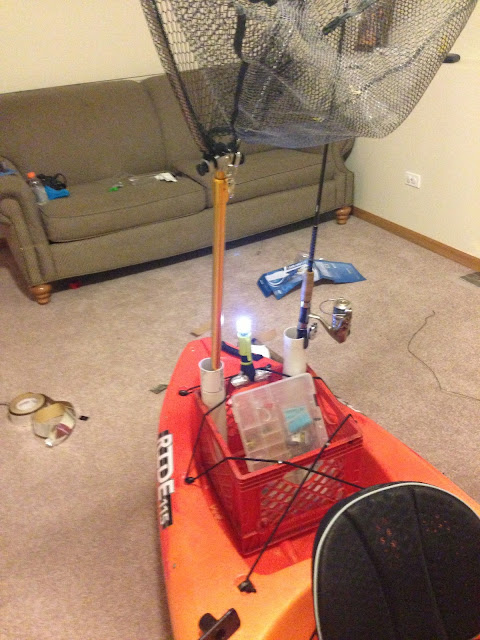 Milk crate  - I had one collecting dust which worked out great. I cut a piece of PVC that I had from a rod delivery into two pieces to serve as a rod, net, misc holder. I screwed those in through the milk crate so they aren't going anywhere. I also attached my stern light to that. The light came with a suction cup mount but it never seemed to stay put for more than a minute or so. Bring on the old standby - a few wraps of duct tape did the trick. If you can duct it; f%*k it. I also put a couple of small screws on the front of the crate so the bungee wouldn't roll off the corners. Total cost, $20 for the light. 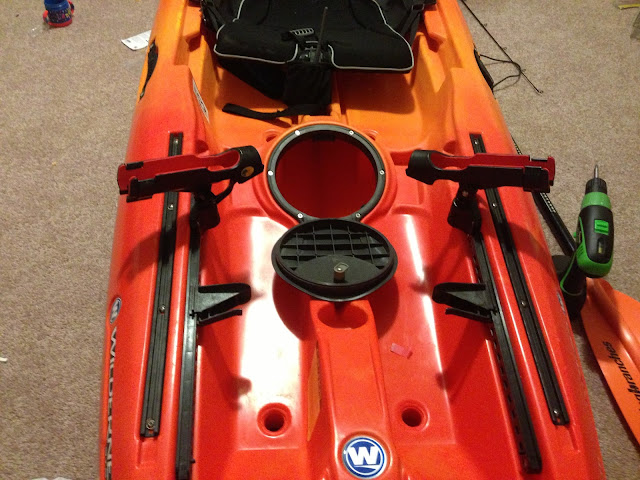 Next, I added some trolling rod holders. These were cheap ($17 for both at BPS) temporary solutions until I the better solution is implemented. Eventually, I will actually use the Slidetrax system for it's intended purpose; I just didn't have time to order what I needed and have it arrive in time.The mounts from the cheapos will probably stay there permanently and serve no purpose after Saturday night.  Still, as a temporary solution they are tested strong by my two year old. I had a rod in the holder just to get a feel for the locations when he came running along and straight into the rod. A thirty pound two year old with momentum is about as real world as you can get without actually having a salmon grab your lure. They held up well. Total cost - $17 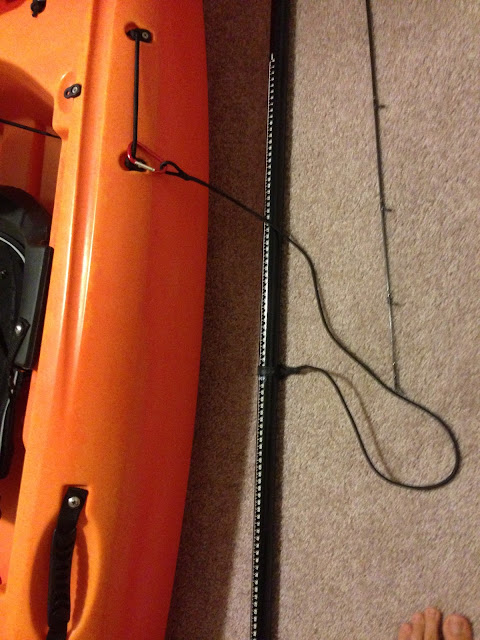 Moving on is a paddle leash. I'm not sure how many of you have every hooked up with a salmon, but it's pretty chaotic from the moment of the strike to the time you land it. The last thing in the world I want to do is lose the one thing that will get me from point A to point B while all of this is happening so it was a nice $11 insurance policy for a $100+ paddle and the priceless gift of getting back to the shore. Now, when a fish hits, I can just throw the paddle over the side and focus on the fish. 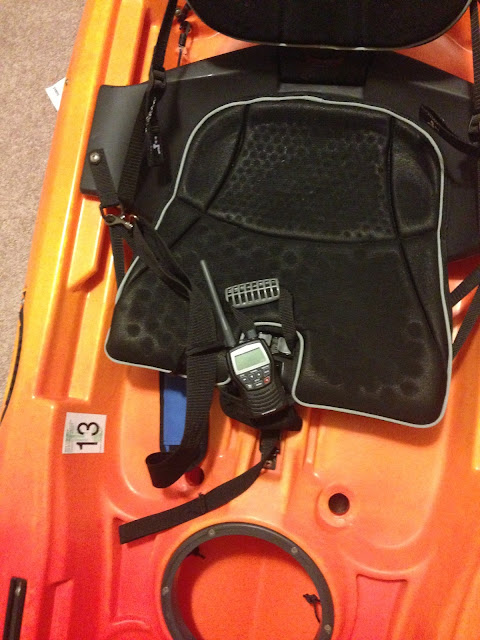 The final picture takes advantage of the nifty little mesh pocket on the Wilderness Systems Phase 3 seat. First, the pocket itself is a great idea with good elasticity allowing a paddler to fit a handheld VHF radio and phone rather comfortably. Now, my one and only concern with this was having them fall out in rough water, the commotion of fighting a fish, or heaven for bid...tipping/flipping. Afterall, between the radio and the iPhone, there is over $700 in replacement value sitting in that little pouch.

At first, I was experimenting with a shoulder strap from a duffle bag. I simply clipped one end to a strap on the seat and the other end to the tether that comes on the radio. While effective, it seemed a bit cumbersome and I didn't really like the idea of having another loose strap on board which could ultimately be one more thing for a hook to catch on or worse yet, something that catches me if I fall off and won't allow me to separate from the boat safely. Once I actually started putting these items in there, however, I quickly realized that they had already though about that! They put a little clip in the little pouch so you can easily attach a tether to them. Good thinking W.S.!! Total cost - $0 Before you say it...the radio is waterproof and I have a waterproof case for my iPhone so that problem is solved too.

The only thing not pictured is the red/green bow light which I simply clipped to the foot peddle with the clamp provided. That cost me $20 as well. This will eventually be replaced once I get the slidetrax system up and running. All in all, these mods are very simple and easily removable. Best of all, you can do everything with stuff probably laying around in your garage, closets, and junk drawer!! So total cost to get me from regular old kayak to fish slaying machine....$68 and a little ingenuity.
By BrookfieldAngler
Email ThisBlogThis!Share to TwitterShare to FacebookShare to Pinterest