Problems are not stop signs, they are guidelines. ~ Robert Shuller

It was that logic that kept my quest to land a king salmon from a kayak moving forward despite my four failed chances in the past week. The first three chances I had last week were blown by what I like to refer as learning experiences. I won't go over those again as I covered those in Kayak Kings - Take One. Fast forward to this past Friday and I was shown that I hadn't learned all of the lessons yet.

Everything about Friday was perfect for fall run chinook salmon fishing in the harbors of Lake Michigan. The weather was cool, the winds were west, the sky was overcast, it was the day after a full moon, and the water was amazingly calm. This is everything I could ask for when it comes to kayak kings. On top of that, a few friends who had started fishing much earlier than I, had already landed about a dozen fish by the time I arrived at the launch. The radio blared "Fish on!" every minute or so from fellow kayak fisherman. I moved as fast as I could to get the kayak in the water, set up the lights, assemble the rods, get my safety gear on, etc....It felt like an eternity as I listened to more "fish on" calls come in.

Finally, I was ready to go and started paddling. Once I hit the first moored sailboat in the marina, I started throwing my lines in the water. As I paddled along the main break wall, I was on high alert just waiting for my reel to start screaming. It took me about five minutes to paddle out to the end of the wall before I could start turning towards the gap that opened up to the main lake. About five seconds after I began my turn, my inside rod started screaming! Are you kidding?! Five minutes in and it's game on!! HELL YEAH!!! I quickly picked up the rod and got a few cranks in on the fish. Then came the decision that would be my fourth mistake learning experience.

As I held on to the rod while the fish was peeling line out, I remembered that I had two lines in the water. When you are trolling in a boat with an engine and hook up with a fish, you never loose forward momentum so your lines are much less likely to get tangled when fighting a fish. In a paddle powered kayak, however, the instant you stop paddling you lose your forward progress and your lines are almost inevitably going to get tangled. With this logic running through my head, I put the rod back in the rod holder, grabbed the other rod and started reeling in the line as quick as I could to get it out of the way so I could avoid those tangles. THAT was learning experience number four. As I was reeling in the deadline, the fish on the other line went on an explosive run and broke the line. Fish was gone and so was my $6 crank bait. The lesson I learned at that point was very simple....catch the damn fish and worry about the tangles later. And so I went on....

I trolled for another half hour with no bites while I listened to even more "fish on" calls over the radio. Fifty yards to my right, I watched a guy who I've known through various fishing forums for quite some time but never met in person (until today) land his twelfth (I think) king salmon of the day. He called me over to borrow some pliers and to give me something. He gave me the lure that has been catching fish for him all day - he had several in his box. Appreciative, I quickly tied it on one of my lines and started trolling. As I trolled, I couldn't help but notice how awesome the sunset and skyline was out there. The colors were spectacular as the low pressure front was receding across the lake. 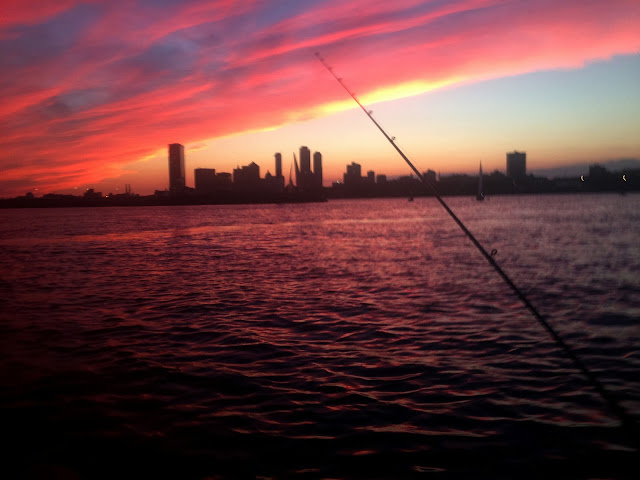 Anyways.....back to fishing. I don't think that twenty minutes had past until I got to yell out "fish on" over the radio for the second time. This time, I left the second line in the water and dealt only with the fish. The fight was strong but it didn't feel that strong to me. It was only a few minutes later that I had finally landed my first kayak king. He was far from big but my cherry had been popped so to speak. Finally, the monkey was off my back!! Even better, my lines didn't tangle! After a quick - and crappy picture - the fish was released to swim and grow. Hopefully I can catch him again in two years when he is a fully grown adult.

A while later, opportunity number three came screaming in. This fish felt a LOT bigger than the first one and like last time, I focused only on fighting the fish. The drag was absolutely screaming and could be heard from quite a distance. Someone over the radio commented "Nick's hooked up! Way to go buddy!" I chuckled but couldn't comment back as I had my hands full. I was being towed around and enjoying every second of it. For the next ten minutes, this battle endured. My arms were burning from trying to get him close enough to net. As his last stand, he planted himself firmly on the bottom of the lake and did everything he could to stay there. In the battle of man vs. fish, I finally won. I spent the next twenty minutes dealing with the tangled mess of braided line. Once back at the docks, I got to put him on a scale where he weighed in at a solid 18.5lbs.

Right around 8:00pm, I called the wife to give her a quick status and ETA. Thirty seconds after I hung up the phone, my drag started screaming once again. I quickly grabbed the rod as the fish took off behind me and to the left. I tried my best to keep pressure as I had to pass the rod over my head into the left hand but I just wasn't fast enough. 2 for 4 at this point.

At 8:30pm, about a half hour before I was going to call it quits, I was well outside the gap on the main lake when the drag went screaming for the fifth time that night. This fish felt massive as it put on an acrobatic aerial display that I could only hear as the sky was pitch black. Though I couldn't see it, it sounded amazing. For the next fifteen minutes, we played a game of tug-o-war like champions. Finally it seemed as though I had come out on top as I went to scoop her up in the net. She had more in her than I gave her credit for though as she rocketed underneath the kayak as I felt a crack resonate through the rod. I caught a glimpse of the end of the rod from the light of my headlamp and realized that the crack I felt was the rod breaking in two about a foot from the top. Still the fish was on and I wasn't ready to concede defeat. A few more minutes, with a rod that was now one foot shorter, and I finally had her at the surface again. Another scoop of the net and it was over. I took a few minutes to let my arms rest, untangle the mess of lines, and check the time. It was now five after 9 and I had accomplished what I set out to do. I called out on the radio, "She broke the rod...time to call it. Thanks for the good times everyone!" I then started my paddle back to the docks where I finally had a chance to take a quick picture of her. The picture is of her laying on the back of my tailgate and she truly deserved a much more dignified one. I had nothing but an iPhone and nobody else around to take a photo for me. She fought too hard to be released and was just weeks away from dying of natural causes. Her eggs were harvested and will be used throughout the winter to catch many more fish in the local tributary streams of Indiana and Wisconsin. Before harvesting, she weighed in at 20.5lbs making her my first official "Tuna". 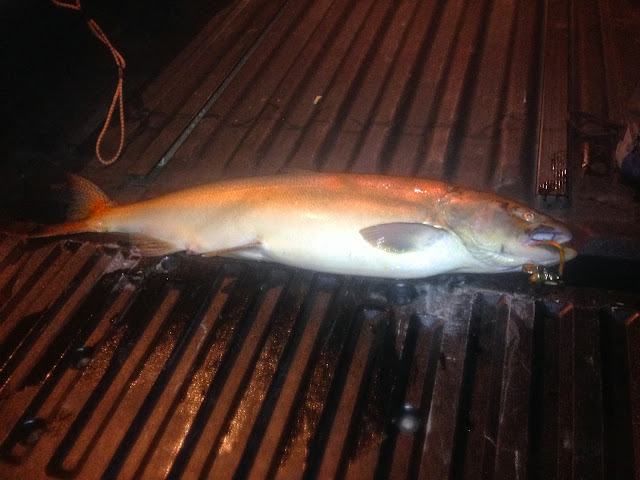