After spending the past 10 days moving, working on the new house, and working for the company that supplies me the money to do all of that, I took a much needed break by heading the Des Plaines River near my new house. Rather than going to the same place I went to the last time I was out, I decided to start about a mile downstream and work my way up. My original goal for the day, as mentioned on the BrookFieldAngler Facebook page, was to start the day off by fishing for some smallies, then some carp, and then some top water bass action wherever I could find some surface scum.

It took exactly one cast to set the plan in motion when a feisty 10" smallie grabbed my fly. What was really crazy was watching a much larger small mouth chase and nip at him as I brought him in. Another couple of casts and I had another. The larger fish once again gave chase. (Seeing this got me thinking...I need to start tying a bigger fly that imitates a small mouth that is around six to eight inches long) I worked this pool for another ten minutes and pulled about half a dozen fish with the biggest being around 14".

The rest of the day consisted of finding any pool I could find, casting at it, pulling a few fish, and moving on to the next. The best pools were either at the end of a set of rapids or right before it. Only a couple of fish were found in pools that were next to a set of rapids or right in the middle of it. The best flies of the day were a three color clouser (dark blue over electric blue over white) and an olive sculpin pattern. I made my first cast around 9am and was off the water by 4pm. By the end of that, I had covered about two miles of water upstream and two miles back down with a grand total of 29 fish brought to hand - all small mouth. I can't even begin to count the number of hook sets that I missed. Most of the fish landed were in the 8" to 10" inch range and six of them over 14".  As for the other part of the plan...well it never happened. I was having so much fun with these small mouth that I never even tried for anything else. 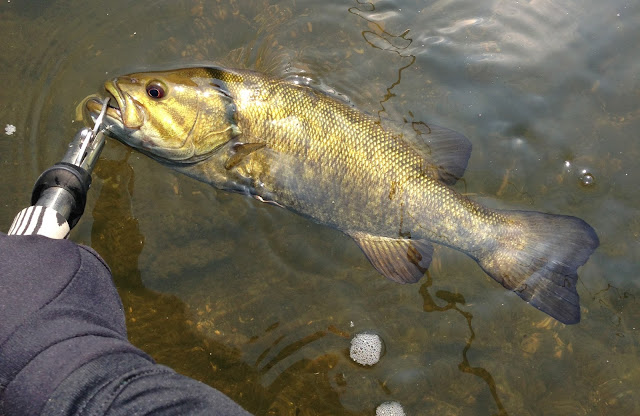