So as many of you know, my wife and I have just purchased a new house a bit further south than our current location and it's about a ten minute drive to some of the best looking water I have ever seen on the Des Plaines River.

The funny thing is that I have fished this area at least a dozen times but have always focused on a few backwater areas for spawing pike, largemouth, bowfin, and carp on the fly. To get to that spot requires a bit of hiking along the main river. Just about every time, I have made a mental note about how great this water looks. It just screams smallmouth to me but then my brain gets in the way and says, "Come on, Nick... smallmouth in the Des Plaines River?" I usually chuckle to myself and head straight to the backwaters.

This past weekend was no exception. With me was Teddy Wozny from Lucid Fishing/BFA writer, and we both had carp on the fly weighing on our minds. This was my first attempt at them this year so I was really target fixated and barely gave the main river a second thought. When we arrived to "the spot" it was severely choked with scum and there wasn't much activity. Still, we gave it the old college try for an hour or so before we decided to move on to another very productive carp spot.

As we were walking back to the truck, there was a spot on the river that just looked too tempting to pass up. If there was ever going to be a fish here, it would be in that spot! It was your textbook fast water, bridge pillar, deep hole, and slack water pocket that you read about in every book ever made that tells you where to catch a river fish. I tied on a size 6 blue over white clouser minnow and cast to the top of the pool next to the pillar. I then began a quick strip, strip, pause cadence. It was on the third or fourth time doing this when my line darted upstream and I set the hook. I was beyond exited to see the fish as it came closer... 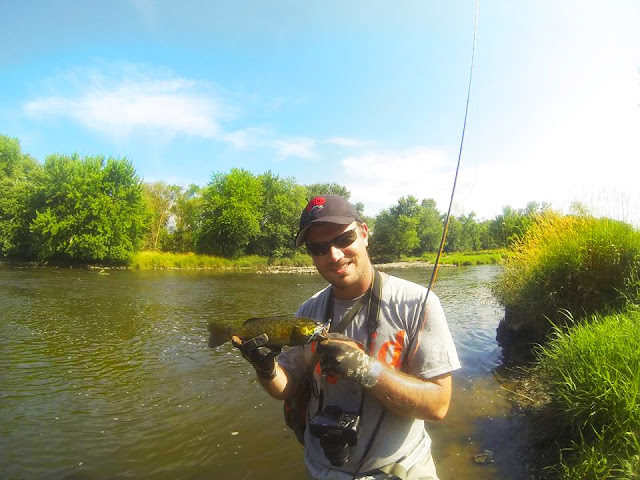 It was a smallmouth!! Well what do you know...I caught one of the rare Des Plaines river smallmouth. A quick picture, release, and a new cast. Sure enough, another fish on and yet another smallie landed. Soon Teddy got in on the action and landed a couple himself.

We decided to continue wading upstream in search of any place that looked like there would be a smallie. The trick seemed to be in or near current with access to deeper water and some cover which was primarily comprised of bigger boulders. The highest number of hook ups came from an upstream cast with an erratic downstream presentation. 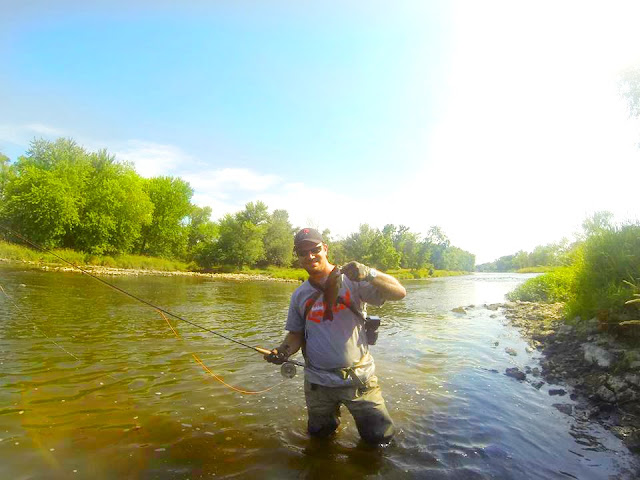 When the day was done, we had landed well over a dozen smallies and easily missed just as many. None of the fish landed were huge, but that doesn't mean that they won't be in the future - or aren't in there already -  if the river continues to improve and people make sure that they release all smallmouth as the law states they must. The sheer numbers of smaller ones gives me hope and indication that these fish are successfully reproducing here and that is just awesome. To make the day a bit more awesome, I even landed my first catfish on the fly.

I'm not sure if the removal of the dams this past year has helped, or if they have always been down south on the river, but it looks as if us Chicagoland anglers have another option for river smallmouth and that option is the Des Plaines river!
By BrookfieldAngler
Email ThisBlogThis!Share to TwitterShare to FacebookShare to Pinterest