Are "Bucket heads" really that bad?

Feeling a bit on the antagonistic side today, I was inspired to write this post by a thread I saw on a local fishing forum about pet peeves in fishing. 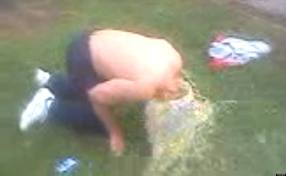 One of the biggest pet peeves that came up was the infamous "bucket head". Now, I can absolutely see why this would be a big pet peeve. After all, it's frustrating to most of us "sportsmen" (or sportswomen for all of you political correct police out there) to watch someone throw everything that he, or she, catches in to a bucket, on a stringer, in the grass, etc...  Many of us have muttered a few choice words under our breath or even out loud at those people - myself included.

But then I got to thinking; are bucket heads really that bad? Let's think about this a bit. How do most of us stereotype a bucket head?
- People with poles and reels big enough to catch a shark
- use giant bobbers
- live bait
- lawn chairs
- slobs
- ignorant
I can probably add a few more descriptive things there too but you all get the point. For the most part, the assumption is that bucket heads aren't really fisherman and pretty much suck at it, right?

So my question then is why is it so bad if they keep a few fish? After all, since they suck at sport of fishing so much, it's not like they catch enough fish to really worry about it, right?

So now it's really time to throw some gas on the fire. I think that they actually do know how to catch fish! The difference is that they get down to the basics and as much as we hate to admit it, the basics are the basics for a reason! Every time something starts to unravel, the common approach to fix it is to go back to the basics.

So the next time you are out fishing and you are pissed off that you aren't catching anything and you just saw some ignorant bucket head throw a nice bass, trout, pike, etc...into his bucket, don't get pissed at him and blame him for your inability to catch a fish because you think he put them all in his bucket. Instead, learn from him and go back to the basics!