Ok, maybe not...at least not officially. Now if there was a musky in place of that redhorse then I'd call it a grand slam for sure!

Ed and I met up on a tributary to the Fox for an afternoon of flooded river fishing. Neither one of us has fished this tributary before but we heard from a "reliable" source that under normal conditions, the stream is ankle to knee deep all the way to the mouth of the Fox.

After two hours, a few missed fish, and a redhorse - I can comfortably say that this little knee deep creek is filled with monster boulders and few fisherman eating holes. I can also say that if Illinois had trout water, this stream would be one of the best out there.

Once we hit the mouth of the stream with little to show for our efforts, except a wet cell phone and an ass puckering discovery of big hole, we headed upstream on the Fox. This is where it got fun - at least in terms of fishing.

I ended up with a 14 or 15" largemouth that hit a chartruese over white clouser, a solid 16" smallmouth on a blue over white clouser, and hooked a nice walleye with that same fly. As I was reaching down to grab the fish, he gave one last head shake and spit it. In the heat of the battle and in my excitement of what would be my first walleye on the fly, I almost made a very bad move. My disappointment was quickly remedied by a moment of clarity.  I realized in retrospect that I almost tried to lip that thing! My fingers are grateful that he spit the hook.

Ed stuck with the proven white grub and a plastic hellgrammite on a jig head worked slow along the bottom for a couple of smallies and two eyeballs. 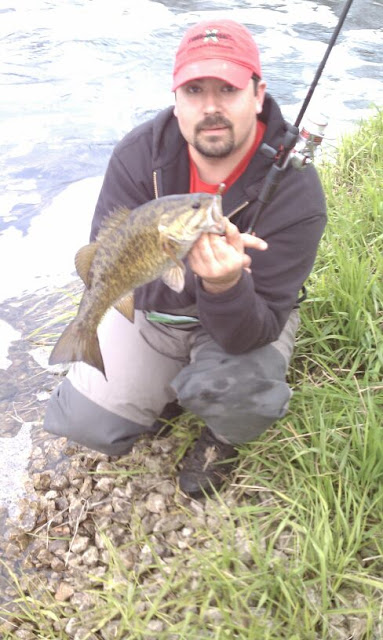 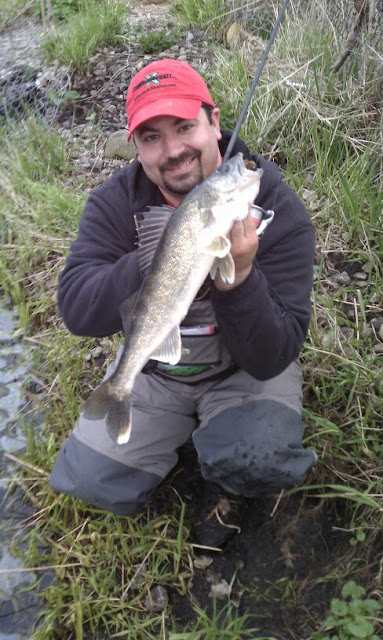 All fish were released to be caught again!