The right place at the right time 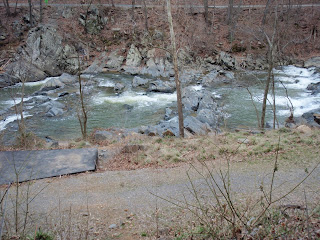 My last work trip brought me to our nation's capital, Washington D.C. for a satellite communications exposition. Of the 9 days I was there, I only had 1 solid day where I could actually get out and do some fishing.

My original plan was to make a 2 hour drive to the mountain streams of Virginia in search of wild brook trout. I was rather excited about the prospect of casting dry flies with the new 2wt to eager brook trout until I went to purchase my fishing license the night before. As I navigated Virginia DNR's website, I had to get a up a few times to make sure my eyes weren't playing tricks on me. I even took my contacts out thinking that they must be dry or something. $72 in license fees for 1 day of fishing?! Exsqueeze me? I beg your pardon?

That can't be right. I thought for sure I was simply misunderstanding the poorly laid out website so I called the customer service number just to make sure. After a 5 minute call with the gentleman on the other end of the line, I realized that I did indeed understand the website correctly and my eyes were not playing tricks on me.

On to plan "B" which consisted of fishing a place called Gorman Park in Maryland which was about a 25 minute drive from my hotel. Luckily, Maryland is a place with much more reasonable fishing license costs. I had heard about this place somewhere on the internet so I figured it would be a good place to start. If nothing was happening there, I would drive 10 minutes further to another section of the same river that I have fished several times before and have always caught something.

With me was my long time friend and coworker, Shannon. He is also a fly fisherman who happens to be left handed so it's always a pleasure to fish with him since we can stand side by side and not get in each other's way. Gorman park yielded nothing and there wasn't a thing moving in the ultra clear water or hiding in the very limited structure. After a couple of hours of exploring, we decided to head to our proven spot.


As we walked to our favorite hole in that stretch, we noticed a white truck and a few guys with buckets standing by the river. Instantly, I was getting my phone out to call the DNR and report the bucket heads. As we continued towards this truck,  I noticed a few of the guys had badges and then noticed the DNR stickers on the truck when it dawned on me. They weren't bucket heads! They were stocking the river! Unsure of what this meant in terms of being allowed to fish, I asked the question, "Can we still fish?" To which one of the guys replied, "Absolutely! The river is open!" 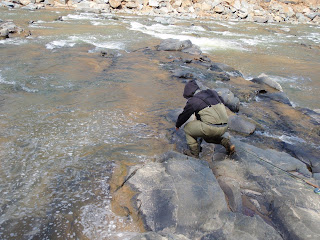 After a bit more conversation, we hit the water to see fish everywhere! It seemed peculiar to me as I watched fish after fish hit the surface. I saw no visible hatches so I was quite perplexed as to what they were doing. I never really figured it out, but the choice of which fly to use seemed obvious to me - DRY FLIES!

Well, it turns out the obvious choice wasn't really the right choice. As a matter of fact, the next hour or so was spent trying everything from dries to nymphs to eggs and even a few worm patterns. Not a single fish was taken during that time.

Finally, one of the volunteers who was helping with the stocking came down and started tossing a spinner right next to us. His first dozen or so casts resulted in almost as many fish before he decided to move up stream a bit. That was all I needed to figure it out......

Over the next several hours, we caught so many fish that I lost count. Most were 10 to 12 inches and very aggressive. A few bigger ones came to hand as well including a couple pushing 16 inches. I only took pictures of two fish the entire day. Picture one was the first rainbow of the day and the second was my first golden rainbow trout ever.

Every fish was exciting but a few of those fish were absolute rockets when it came to hitting the fly. One of my favorite fish that was landed was a golden that chased the fly down for a good twenty feet before it finally took a swipe at it. Watching that thing chase down the fly that was just inches below the surface was simply awesome.

It may not be as grand as catching wild trout in some remote stream, but it sure beats catching nothing. They still presented a challenge as the presentation had to be pretty specific for them to actually hit the fly instead of just following it. Too slow and they lost interest. Too fast and they didn't even pay attention. Loose the rhythm on the strip and they darted the opposite direction. In the end, a lesson was learned when it came catching stockers on the fly - use something with a lot of flash and keep it moving!

*edit: A fellow angler corrected me - it isn't an albino rather a golden rainbow trout
By BrookfieldAngler
Email ThisBlogThis!Share to TwitterShare to FacebookShare to Pinterest