Musky on the fly - is this my day?

Sometimes, for some strange reason,all things go exactly right and fishing is absolutely stellar. The kicker is that it is usually somebody else around you who is having that stellar day.  The fish are biting their lures, flies, worms, etc...They always seem to cast to the right place at the right time. Their retrieve is exactly what the fish want that day.

All the while, you are "happy" to see the fishing gods smiling down on that person knowing that one day it could be you. You may even have a smile on your face and throw out one of those good karma one liners...

"You've got them dialed in!"

While you are saying these things with a candy coated smile, you might be truly searing inside with a rage that glows an ominous green.

It's one of those days where you are blessed to be fishing with your best friend that you've known for 20 years with one of the greatest guides that musky fishing in Indiana has to offer like Predator Pursuit Indiana Musky Guide Service. Maybe that guide just happens to be another good friend of yours.

The morning before the big day on the water, no matter how long you have been fishing, you are so excited about catching the big one and spending time with those great friends that you can barely sleep. Instead you find yourself behind the tying bench coming up with a new fly pattern that is just sure to work.

You wake up the next morning after a whopping three hours of sleep, load your gear, and hit the road. It's a bit colder than you anticipated and it seems like the wind is not going to be on your side. You drive three hours anyways and as the sun is breaking over the horizon, you note that there are small pockets on the other side of the lake that seem to be calm as can be thanks to some trees and a hill.

But then you think, what are the chances that the fish are going to be in this one small area when they have an entire lake to chase food, hide, and ambush. You stay positive anyways as the boat approaches the calm zone, drop the trolling motor and start casting.

On this day, you decided to cast your brand new custom 9wt Batson RX8 fly rod that was built by especially for you by FSA Custom Rods that you paired up with the new Kraken reel from Allen Fly Fishing. On the business end, you tied on that new pattern you came up with last night and hope for the best.

Cast one, you are impressed at the feel of the new rod as you lay out a seventy foot cast without a whole lot of effort. You think about how cold that forty degree water must be and how a slow and steady retrieve with the occasional pause might be the trick to getting these fish to move. At the end of the first cast you bring your tip up and do it all over again. It's only been a couple of casts, but you think you have the rhythm down and you cast it out again a third time.

That best friend that is with you has never been musky fishing so as you are casting and retrieving, you are explaining to him that musky fishing isn't like catching bluegill or bass. Those multiple fish days are pretty rare even if you are with a very talented guide. You start to explain how cool it is when you see a fish follow your lure or fly all the way to the boat and, a lot of times, people consider themselves lucky to even see that happen.

As you finish explaining this and you are nearing the end of your retrieve, your friend says, "You mean like that?!" As you look three feet past your fly in the water and right one que, there he is. It's that follower that you were just telling your friend about. You let the fly suspend in the musky's face for a few torturous seconds and give it a tiny twitch to get that combination of orange and green feathers, fur, and flash to pulsate in front of his face. His gills flash white as his mouth opens wide and you see your fly disappear. A quick strip of the fly line as you sweep your rod firmly sets the hook causing the water to explode with a fish doing everything he can to spit that mouthful of regret.

A minute later the net is out and your first musky on the fly is in the boat! Excitement fills the boat, fist bumps are shared, smiles, play by play replays from all parties, and a quick picture before you get that fish swimming away. As you watch him swim away, you start to wonder, "is it my day?" 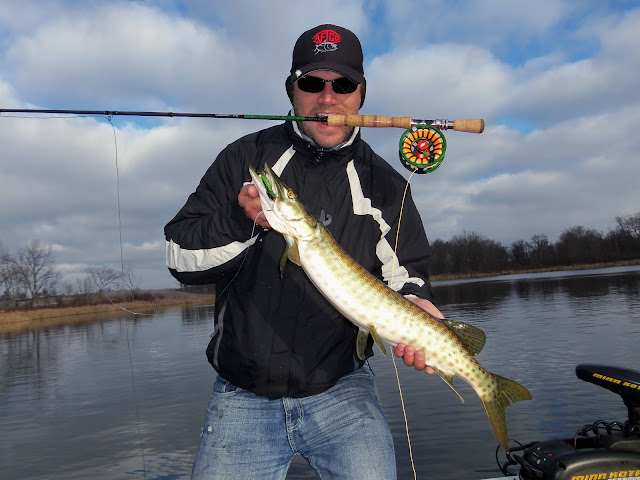 As everyone gets back to fishing, the excitement is still palpable. For you, even though it was the third cast, you wonder if you just got one of those "first cast curses" or if this is some sort of indication of how the day will be.

A short time goes by and your best friend has his first follow. He let's the bait sit for a second and follows it up with a small twitch just as you had done not long ago. This fish isn't buying it though as he slowly turns in the other direction. You feel OK though because this musky virgin just had his first follow and you can see that he is beyond excited. You also feel good knowing that the fish are stacked in this little section and at least willing to give you a preview.

The morning continues as do the follows. The day is getting a bit colder though and you are struggling with your fly line as the cold air is making it very stiff and difficult to cast. Soon after, the ice begins to constantly build on your guides and you are spending more time removing ice than you are fishing. The stubborn fly fisherman in you wants to keep going but the practical fisherman in you says to give it up and grab the conventional gear...and so you do.

Not long after, your lure has been cast and retrieved quite a few times. You know it must work because it's the same general colors as the fly and the skies are quite bright. It is then that at the end of your retrieve, you give a few twitches and pauses near the boat to be sure that nobody has followed it in. During warmer months, you would be doing a figure 8 at the boat but when its colder like this, a few twitches and pauses are the better approach. Just then, a fish rockets out from under the boat towards your lure and turns away at the last second. He was a smaller fish so you aren't too upset that he didn't take it. Instead, excitement is back in the air.

A short while later, you notice a big arch on the graph as another fish is under the boat. A few seconds after that, you notice that one of the sucker rigs behind the boat is starting to get a bit antsy. Since your best friend hasn't caught a musky before, you know that this fish is all his! The giant bobber goes down and the clicker on the reel is singing. Instruction are given to him to grab the rod, slowly reel down, and then set the hook like he is trying to break the rod!

He does just as instructed and it's an instant battle. You could see the grin going from ear to ear as his rod is bent over and he feverishly tries to get this fish under control. As you watch this unfold, you think to yourself, "is this my day"? The smiles quickly leave the faces of you and your friends as you watch a half eaten sucker fly from the water and into the air. This is heartbreak. You know the feeling as it has happened to you more times than you care to think about.

As the moans fill the air, you look over the side of the boat and see a musky head peaking out from under the boat. "He's still there!" you exclaim. As you quickly assess the situation, you realize that you are the only one with a rod in your hand so you drop your lure over the side of the boat and watch this musky lock in. A small twitch causes him to move within fractions of an inch of the lure. The lure suspends as the does the fish. Your heart it racing and your knees are shaking...."Come on baby! Eat it!" You twitch it again, the mouth opens and the gills flair. Set the hook...got him! A quick swoop of the net and you have just landed your second musky of the day.

As all the celebratory traditions take place and the fish is photoed, measured, and released, your excitement has a touch of cloudiness. "Did I just steal my friends fish?" As you replay the entire situation in your head, you realize that this entire thing happened in seconds. If you had not put that lure over the side of the boat, this fish would not have been caught. You apologize to your friend who is grinning from ear to ear and realize that he is beyond excited anyways. 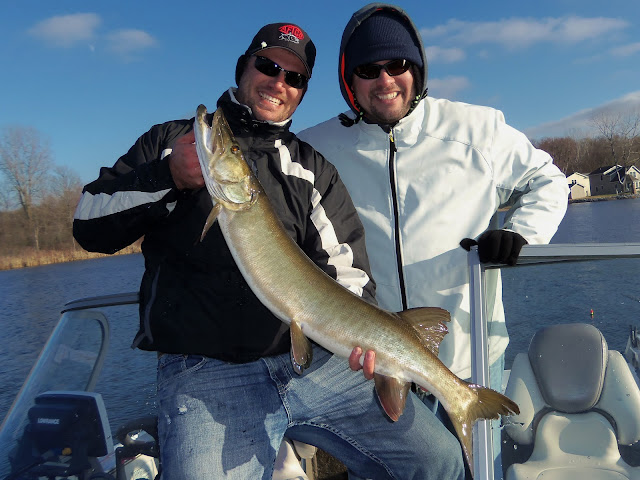 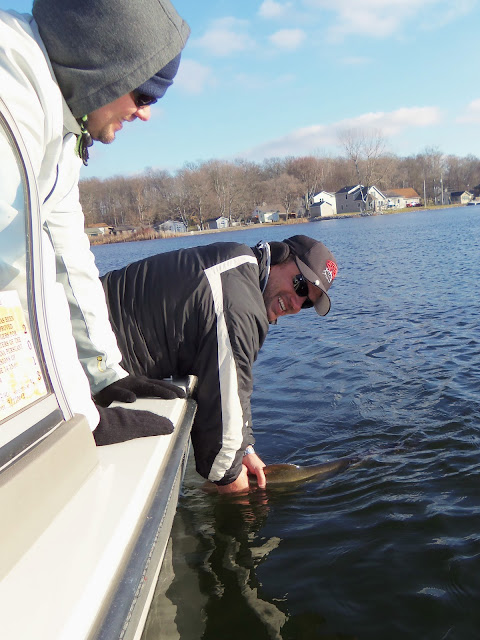 It is then that you can definitely say, "today was my day"