No Practicing in a Field

This weekend involved very little in terms of immediate and direct effort to catch any fish. Saturday was spent doing absolutely nothing related to fishing while Sunday was spent learning a piece of the fly fishing cast that has just eluded my arsenal of tools.

With that said, I am heading to Orlando in December and through my fantastic network of friends, I was able to find a local fly angler to show the me the ropes at Mosquito Lagoon and Indian River. This gentleman told me, among other things, to work on my casting! Sixty to eighty foot casts with a certain degree of accuracy are a must he told me. Given the likelihood of wind, this was gonna be tough!

This, to me, was the switch that I needed to be flipped in order to finally force myself to learn how to double haul. I have known how to single haul on the back cast for quite some time, but that wasn't really helping me increase distance or with windy conditions. Typically, I was able to really generate some fantastic line speed on the back cast but it would all fall apart on the forward cast since I didn't have the energy in the rod to deliver the line forward.

The timing and mechanics were the major struggle that I just couldn't get down. I liken it to the ability to rub your stomach and pat your head at the same time. At some point in the sequence, both hands almost always end up either rubbing or patting. I was really lost on when to start the haul going forward.

So, on Sunday, I dropped the little guy off at Nana's house and headed to a nearby river that had plenty of room to cast. I wasn't leaving until I figured this thing out! Now some of you readers may wonder why I just didn't head to a nearby field to practice. My answer to you is the same reason why I didn't go to that field to learn how to cast a fly rod in the first place. If I am going to have a fishing rod in my hand, I at least want the chance to catch a fish. The last time I checked, there aren't too many field dwelling fish that might take a pass at my offerings.

I stood in this river for the first hour working only on the forward haul. I am not sure why, but all of the sudden it happened. I felt it. Everything clicked and I was able to consistently do a forward haul. Now came time to put the double in double haul. I struggled once again with putting the two together but I kept at it and it all ended up coming together. I was finally casting further and with less effort than I ever have before. I was amazed at how effective this was. Fewer false casts, less effort, and better results - this is just fantastic.

Now that I had the double haul down, it was time to work on some target practice with my new found distance. I would pick out some mark and try to get the fly as close to it as I could. The targets varied from the start of an eddy, a pile of weeds, or even a bridge pillar. By the end of the day if I wasn't hitting them, I was pretty darn close.

To cap it all off, I found a willing carp to take a clouser right off a bridge pillar. So in the end, it was an extremely successful day with a bonus fish to boot. 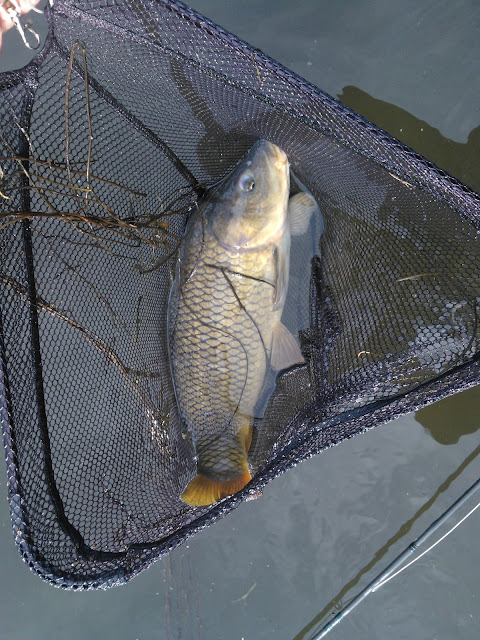 And that, my friends, is why you don't practice in a field!