This weekend I found myself fishing the tributary streams in Northwest Indiana in an effort to find some steelhead. I had also heard of a few fresh kings coming up the streams which was pretty surprising to hear considering the spawn is over.

The day was warm but the wind was fierce. Almost every time it would gust, you could hear and/or see a tree or two falling. The sound was deafening and reminiscent of a shotgun blast. I found myself slightly on edge and very aware as I looked at the forest full of dead trees that towered over the stream.

Every time I would hear a gust of wind start to make its way through the forest, I would stop fishing and look up to see if a tree or branch was about to fall on top of me. Shortly after noon, I had my closest call when a tree just fifty feet upstream of me fall into the stream. From that moment on, as I would walk up stream and find a run that I wanted fish, I would search out the healthiest looking tree along the bank and back up to it. I hoped that it would block anything from falling on me or at least give me an extra few seconds to dive out of the way. It seemed like the safest option at the time and as I sit here typing this entry, I believe that I was right although staying home would have been the best bet - in terms of safety that is.

Wind and fallen timber aside, I was out there there to find big fish! I started fishing a few different streamer patterns but just wasn't feeling a ton of confidence in them. I am not sure why as I heard the spinner bite was great in the later part of last week. I think the fact that I ran into a few other fishermen who were all tossing spinners unsuccessfully was probably a main factor. 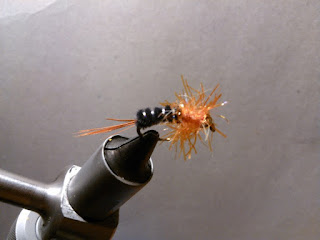 Since my confidence in streamers was low, I decided to try out a couple of new (at least to me) things; the first being a two nymph rig. I have always read and heard about using these but just never really jumped on the band wagon. Since I was fishing solo today, and I had all day, I felt today was the day to give it a go. The second new thing I decided to try was a Steelhead Hammer variant that I had tied up for a recent fly swap on The Fly Fishing Forums. Behind that fly, I tied on a simple greed caddis nymph. I say simple because it's just a size 12 nymph/egg hook with green micro-chenille body and a couple of peacock herls as the head.

I found a good looking run and started drifting. Almost instantly, I started getting small hits but kept missing them on the hook set. I suspect that most of the hits were either small smolt or bluegill. I continued to adjust the depth and weight a bit to make sure that the nymphs were tapping the bottom. After a dozen or so drifts, I found the right depth. I sent the rig upstream, did a couple of quick upstream mends, and tracked the indicator carefully. Just as the rig was reaching the very end of the run, it stopped for a split second and I set the hook. Instantly, I felt the weight of something big followed by four really hard head shakes and then a quick snap! Whatever it was just snapped the tippet all the way at the leader. Crap!

I started to tie up another rig when I realized that I was out of indicators. I swear that I had at least three of them in my pack but just couldn't find them for the life of me. I decided to go back to streamers and after an hour of no success, I hiked back to the truck and made a quick run to BPS so I could buy some more.

Once back at the stream, I rigged up another two nymph set up. I used another Steelhead Hammer as the lead fly but used a sucker spawn fly as the dropper. I found another run that looked promising. The stream here was rather shallow almost all the way across except for a small channel that was a couple of feet wide and dropped to about three feet in depth. I figured that if a steelie was going to be moving upstream, it would probably use that channel.

An upstream cast followed by couple of quick mends and the drift began. About three quarters of the way down the indicator suddenly stopped, I set the hook, and it was fish on! I could see the bright silver flashes as the fish shook tried to shake its way off the hook. After that didn't work for him, he decided to start running downstream...and then back upstream....and then a jump almost right at my feet. This was a nice fish pushing thirty inches and doing everything he could to spit the hook. After the jump he started shaking again causing my flies to fly over my head and into the tree behind me.

A loud series of expletives could be heard echoing through the forest as I lost what I thought would be my first landed steelhead on the fly. What the heck went wrong?! Did I not set the hook well enough? Did I have too much tension on him when he jumped? The truth is that I just don't know but that fish will haunt me until I  finally land one. I continued to fish the same run for another ten minutes or so without a bite. The sun was getting lower in the sky and I had a honey-do list waiting for me at the house so I decided to call it quits.

I jumped in the truck and started to head home when I realized that I wanted to check one last spot that was sort of on the way. When I got there, I quickly grabbed my stuff and started walking the stretch. I didn't seen anything moving so I started the short walk back. As I approached the truck, I saw a dark body swimming upstream so I slowly approached it from behind and realized that it was a leftover zombie king. The body was black, the tail was white, and it seemed that she was simply swimming along to find a place to die. I tied on a small white bunny leech and started twitching it front of her face as I hid behind a tree. It took about five minutes before she was aggravated enough to take a snap at it. When she finally did, I set the hook hard. The water erupted and she took a quick run for about fifteen feet downstream. That was the last burst of life left in this fish as she came to hand without much fight after that. Though it wasn't the best fight in the world and I caught it and the end of its life, I can still say that I have finally landed my first king salmon on the fly.