Fall smallmouth - They sure are pretty

The local steelhead and salmon creeks were pretty barren this weekend so I decided to check out the amazing gizzard shad run on the Fox River that Ken G mentioned in a recent Facebook post of his.

Just as he described it, the shad were everywhere! As you stood in the clear water and looked ahead, it seemed as if there were distinct edges that you never knew were there. The tan bottom disappeared and a dark expanse would begin. If you looked long enough, you realized that this edge was moving. Was it an illusion? A mirage from the sweltering 40 degree air? Nope, it was thousands and thousands of gizzard shad balled up like a pack of ocean fish trying to protect itself from a hungry predator.

Curiosity got the best of me as my mind began to contemplate how to catch one of these things without snagging it. These aren't the poor man's salmon, the American Shad (Alosa sapidissima) or Hickory Shad (Alosa mediocris) that anglers have a blast catching with small and flashy flies but rather the filter feeder known as Gizzard Shad (Dorosoma cepedianum). That's right...I was fishing for bait.

Since these are filter feeders, the best idea I had was to go ultra small with a tiny nymph so I tied a size 22 copper john and started nymphing. It took about two passes until I felt my first tug. Woohoo! It worked!

Wait a minute....no it didn't. That wasn't his mouth, it was his fin. This happened a good 10 times before I noticed a couple of them coming to the top and taking something off the surface. I quickly retied with a size 16 elk hair caddis and started drifting. After a couple of dozen passes over the top of the massive balls of shad, one willing participant came up and took my fly! I was surprised at how hard these fish fight and how large they actually were. After a quick self release at my feet, I felt accomplished and decided to go after some bigger and more predatory targets so I moved down stream a bit.

As I waded downstream, I was amazed to find that the great shad run of 2012 just kept going and going and going. Just about every cast resulted in a snagged shad or several bumps as the clouser minnow went over the backs of these fish. I realized that it was going to be tough to find any predators and if I did, I doubted that my fly would look any more tempting to it than the countless number of shad at its disposal. I kept on going anyways and finally found a gullible smallmouth.

He wasn't big, but he was sure was pretty and wrapped up a day of fishing in good style. 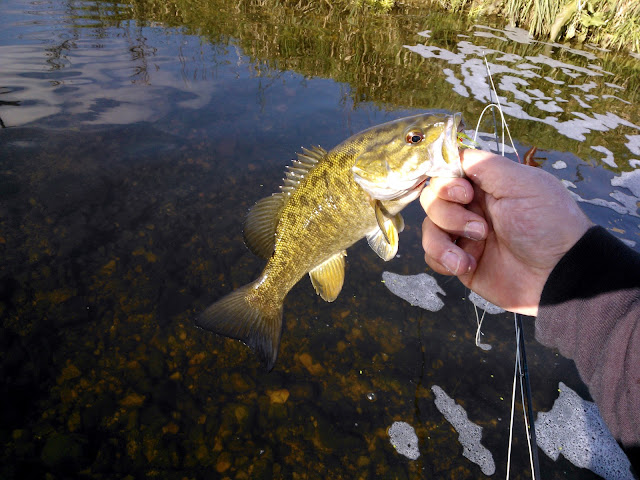