After last weeks little incident that involved me swimming in Lake Michigan combined with the sinking of the boat last year, I was really beginning to think that I had a curse placed on me when it comes to fishing for kings.

I really wanted to see if I could break that curse so I headed out alone in an attempt to say to those fishing gods, "Bring it baby!"

"You see, it's just you and me out here today" I continued as I tied my go-to crankbait on the line.

I felt good getting that out of the way. No immediate swells came to sweep me off my rock. No massive gusts from the gods. Just the bright sun and a crisp breeze. On the other hand, I worried that perhaps they were just waiting for me; taunting me a bit perhaps. I kept that in the back of my mind as I began to cast.

For the first half hour or so, there wasn't a whole lot of anything happening. The fish were there and they seemed to be jumping at will. There was a lot of boat traffic out there as well. Some of the boats were fishing and some were simply enjoying one of the last days on the water. I noted a kayak angler out there who seemed to be doing the same thing as me. He was by himself as if to say to the fishing gods, "bring it!"

As he paddled past, he gave the silent fisherman's nod. Just as I was about to nod back, my hands were greeted with a sudden and forceful jerk. Did my line just caught up in a boats' prop?!

The line was running and I was grinning from ear to ear. Man, I love this stuff!

After a few good runs and bit of give and take, I realized that I didn't have a net man! Hmm...well this outta be interesting.

I blindly fumbled with my left hand for the net while I held on to the rod with my right.

I swung it around and clumsily dipped it into the water while the fish instinctively knew to run in the opposite direction.

"This was going to be a challenge" I thought.

The net goes in the water, I hold the head up out of the water, and SUCCESS! 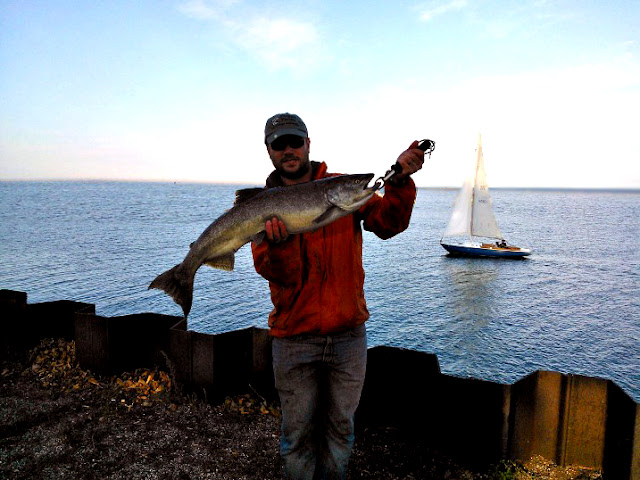 While I did not know it at the time, a couple who was out for an afternoon stroll had watched the entire battle unfold. I think they were just as excited about the fish they saw me holding in my hand as I was, so they happily took an extra minute to snap a couple of pictures for me. As evidenced in the photo below, the fish still had quite a bit of kick left in her! 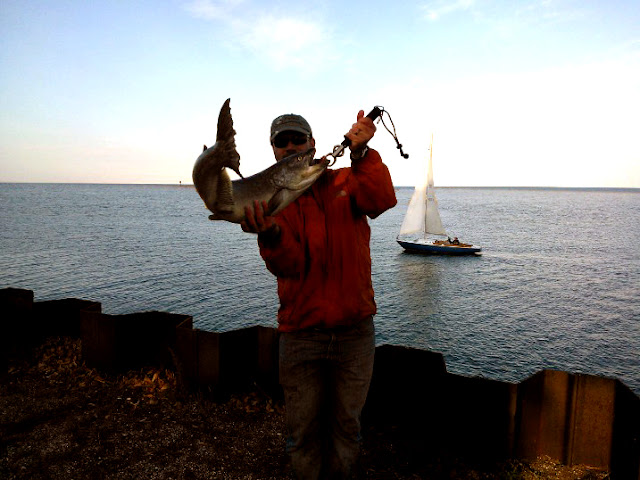 The next couple of hours proved to be rather slow. Still the fish were jumping, I just wasn't able to get that lure close enough to any takers. The sun was now gone and the moon was as bright as I have ever seen.

I heard a rustling behind me causing me to turn around and find a fellow fisherman working his way towards the water. We exchanged a few pleasantries while I tried to size him up. As we continued fishing, he mentioned that he has been out a few times already but just hasn't  been able to hook up with a king yet. I took this as an invitation to inquire as to what he was throwing and share what little knowledge I have.

"Well, do you have anything that dives deep?" I asked. To which he replied that he did not. As I began to share a bit about the lures that had proven successful for me, I could tell he had a bit of skepticism  I can't say I blame him as we have all heard that guy, who thinks he knows it all, share his "secrets" that you have never actually seen work.

As if on queue, I had a sharp pull for a brief moment until the fish let go. I continued to share my free advice with him as I cast the crank back out there and once again, as if on queue, fish on!

This fish was hooked and hooked well! Long runs were plentiful and the fight was hard. I also had a net man this time! Still, net man or not, this fish knew what the net meant and ran in the opposite direction the second she saw it. The net man felt bad as the fish peeled the line back off my reel. "No worries" I chuckled..."just a longer fight!"

Finally, the fish was done and in the net she went! She wasn't as big as the first fish of the day, but she was FRESH!!! It was clear that she had just come off the lake and this was only beginning the end of her time. 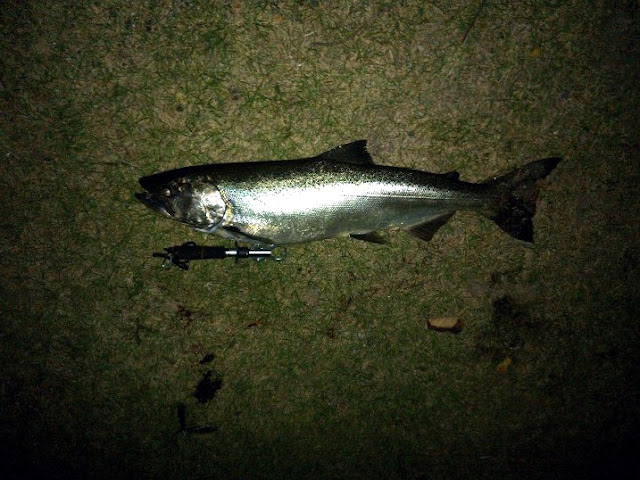 I clearly had the attention of this young angler at this point in time. He had to take off a short while later but I have a feeling he might be getting his first king the next time he goes out! Good luck!!

As for me, I kept fishing. I felt good about my battle with the fishing gods. I'm 2 for 3 at this point and I haven't gone in the water. What else could one want?

Around 9:30, I went to make a cast and noticed a strange sound. As I turned my headlamp on, I realized the fishing gods may not be done with me yet as I stared at a huge tangle of line on my reel. I stripped yard after yard of line until I finally got to the end of it. A quick snip later and I was tangle free but really short on line.

A full cast would bring me to my backing but I figured that most fish were coming at the halfway point in the retrieve so I should be OK. I cast it out once again and four cranks into it, I got slammed! It took about 10 seconds for me to see my backing run out and watch the line pop.