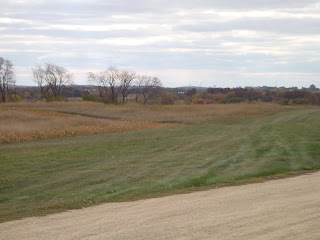 The end of fishing season was a bit of a let down for me because of the usual suspects and the not so usual suspects. I recently started school and needless to say, that took up a large chunk of fishing time but I also was having some bad luck when I did get out. I must say that I was getting tired and felt like I was stuck in a very bad rut. I even tried to get out fishing with Nick and that also fell through because of other commitments. I thought that this feeling of being generally tired, frustrated, and overall drained was not going to leave, then I got a call from the owner of Quarry Ridge Hunt Club in Lena IL.

He asked me why I had not renewed my membership and if I was planning on coming out to hunt. Truth be told between work, school, and family; I was not even thinking that I never did get my membership. That is when I recognized that I needed to slow down and get in some recreation time because this was becoming an all too familiar theme; work, school, family, and repeat. This needed to change and I was going to do that.

I purchased my membership and scheduled a hunt with my dad, cousin, his girlfriend, and my friend Bill. I am even hoping that Nick will get his license and come out for a pheasant hunt. The hunt was a morning outing and we decided to meet up at my house before sunrise to make the journey out to Lena where the hunt club is located.
After an uneventful drive, we arrived at the club and met Corey, the owner, and his new pup Cooper. Cooper was excited to meet some new people and my pup, Tino. Cooper is a 4 month old Labrador Retriever and a nice little pup at that. We filled out the necessary paperwork and got ready to go bust some clays. Up until this point I was not feeling that nervous excitement but I started to feel the adrenaline kick up as we went out to the field.

We got out to the field where Corey had delivered the clay thrower and started to bust some clays. I could tell my pup Tino was getting really ramped up once he heard to guns start to blaze and I must say, I started to perk up as well! I only shot at a few clay pigeons and got each one as it was released into the bright blue sky. What a great feeling to be out in the open and shooting.

We finally got out into the field and this was Tino's first outing this year and with the warmer temps, high grass, and birds not wearing their full scent; had some doubt as to the success our group was going to experience. After entering the field it was not long until those fears were dashed when I saw Tino lock onto the scent of a bird. He locked up on point and I heard the piercing of the hawk scream from his collar and the group was filled with electric anticipation of the bird taking flight. Well the bird moved to the right and came up right under my feet! My cousin took a shot and the first bird was harvested! Tino did a great job on the retrieve. We got three more birds including a long retrieve for Tino, who really worked hard for us and was perfect on the day.

I guess I look back on the last few months and realize that I am lucky to be a part of the outdoor lifestyle and it is really in my blood. I love to be out fishing, or hunting, and it really does not matter if fish are caught or birds are harvested. The most important part of the outdoors is spending time with family and friends and having a great, relaxing time out in the field or on the water. Sorry for not writing in a while!

Here is a short video of the outing. I have some really cool ideas coming up for video in the field and will keep you posted as I fine tune the presentation. Enjoy!!!