A while back, I picked up an Allen Alpha II Fly Reel to pair up with my TFO BVK 8wt rod.

I had heard mostly good things about the reels themselves and impeccable records of fantastic customer service. When the reel went on sale, I decided to pull the trigger.

Over the past eight or so months, I have done just about everything I could to put it through the most abusive test that I possibly could. I have gone to task with big fish and it has spent countless miles bouncing around the bed of my truck as I go from one spot to another. It has seen the bottom of plenty of streams and rivers and has been fished in hot weather and cold weather. It has seen snow, rain, and everything else.

Here is what I have concluded....

Initial impressions
SEXY! I really don't need to say anything more in this department, but I will anyways because I love to hear myself talk....or type...whatever 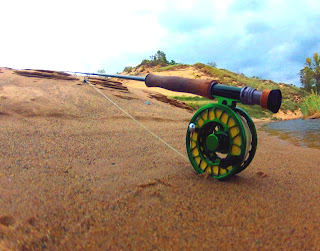 The anodizing is excellent. When the light hits it, it just barely penetrates the green coating and gives the reel an iridescent glow that I am a sucker for. Green anodized aluminum has always been a favorite color of mine and I am proudly keeping the tradition alive with this reel....as well as others.

Holy crap! How much backing can this thing hold?! I lost count around the 200 yard mark but it's a lot! Slight disclaimer on this one...I wasn't using typical backing on this. Instead, I opted for some 60lb PowerPro braided line since the diameter is a bit thinner than regular old dacron. Still, it holds a lot!

Now that I have the backing and fly line, I am really noticing that this thing is heavy! I didn't really notice it at first but now that my initial googly eyes are starting to focus a bit more clearly, I am finally realizing the first negative thing I can say about the reel...it's heavy.

To do a bit of an apples to apples comparison here in regards to weight, let's look at the the Lamson Konic vs. the Allen Alpha II.

So at this point, the reel is still earning high points but definitely took a slight hit because of the weight factor. The question at this point is how much will the effect my overall experience with it.

Long term
Now that I have had some time to actually use this thing in real world conditions, I can definitely say the weight can be an issue. On the days when I am fishing big water and have to lob out long cast after long cast, arm fatigue is definitely there.

On other days when long casts aren't really necessary, I hardly even notice the weight. I suppose that I would even venture to say that after a while, my muscles have adapted to the weight, so that is something for all of you prospective buyers to consider - give it some time and you will adjust.

I have dropped this thing on rocks, in the water, gotten mud and sand in/on it, and bounced it around the back of the truck for many many miles. The spool is still straight and true, the finish is still almost unscathed, and the drag is still buttery smooth.

Which leads me to my final topic of review - the drag! WOW! Strong and smooth and sealed. I hooked into a monster carp in heavy current with this reel. As soon as I set the hook, this fish took off and probably put the reel through one of the longest drag tests that I could ever imagine. The fish was at my feet when I hooked it and by the time the run was done, I only had a quarter of my backing on the reel. It was incredible! The drag was as smooth as can be and so consistent  I don't think I felt a single surge or flaw during that entire run. 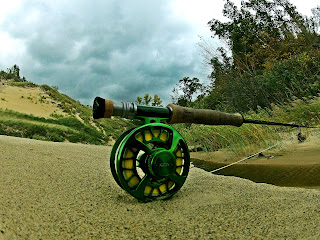 Conclusion
At a $144, this reel is a no brainer. A commonly compared reel, the Lamson Konic, is in the same general price range and has very similar features including a drag system that is raved upon. I'd put this reel up to that challenge any day of the week and in any condition. Which basically means that it comes to down to aesthetics and the Alpha II wins that match hands down - at least in my opinion.

I am also happy to note that I can't give you guys any feedback on Allen's customer service because I have had no reason to need it and I can't see that changing anytime soon, but if it does, I'll be sure to report and update this review!

Disclaimer: I purchased this reel as a regular customer and have received absolutely no discounts or breaks from Allen (despite my best attempts) in exchange for this review.
© 2012, BrookFieldAngler
By BrookfieldAngler
Email ThisBlogThis!Share to TwitterShare to FacebookShare to Pinterest