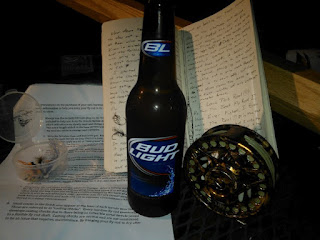 For almost two weeks, I was in posession of a Fall River Fly Rods "South Fork" bamboo fly rod. It carries the specs of an eight foot long, five weight rod that came paired up with a Montana Fly Company Madison II fly reel that was spooled up with Rio DT Trout line.

This was made possible through the Outdoor Bloggers Network and the above mention manufacturers. Fourteen other bloggers will all have the opportunity to test this set up and at the end of it all, one of us lucky bloggers will get to keep it indefinitely.

Let's take a look at the individual components....

Fall River Fly Rods - "South Fork" 8' 5wt
At first glance, this rod is gorgeous. Its color seems to radiate in the sun which also really highlights the contrast between the rod and the wraps. It's a crisp contrast yet still subtle. The guides are all stout and appear to be up to anything you can throw at it.

The grip is premium cork and fits nicely into the hands.

My one concern that I had right away was the reel seat and locking nut. Rather than locking the front foot under the cork, you lock the rear foot into the holder that is permanently mounted at the butt of the rod. You then place a sliding sleeve over the front foot and tighten up with a single locking nut. The nut itself seems to be a bit too small for my taste and is hard to get a good grip to confidently lock that reel down.

In the field, my concern was confirmed as I had to really work at locking the reel down. This may not be an issue with a different reel or once you grind the feet down on the MFC reel that the outfit came with.

Actual casting took a bit to get used to. Coming from a pure graphite background, I really had to learn to slow down. While this rod is touted as one their fastest action rods, it's still a bit slower than I was used to. After a bit of time, however, I got my timing down and laying out sixty foot casts became quite common. With that said, I still can't say that I love casting it; at least not for distance. If I only need 30 to 40 feet of casting, then this rod is great for me. More than that and it becomes too much work for me.

When it came time to test this thing on some actual fish, I didn't want to test it on small fish. I really wanted to push this thing to its limits, so I went after some big game like carp. Initially, I was quite worried that it wouldn't be able to handle it and I had a definite fear of breaking it. After landing my first carp on it, all of my fears disappeared. I later landed a big bowfin on it and the rod showed its ability to handle a vicious strike and hard runs.  This aspect of the rod is what I absolutely love about it. I think I can say that it handles big fish better than any high modulus graphite rod that I have. It's strong, confident, and truly capable.

If this rod became a regular part of my line up, it would absolutely become a main staple and one of my go-to rods. I think it would make a fantastic small water steelhead rod and smallmouth rod. I would also most definitely use it for the coho salmon run in some of nearby creeks. There is not a doubt in my mind that it would hold up and provide enough flex to absorb gnarly head shakes and blistering runs.

The MSRP on this particular rod is right around $1,300. That is a price that is out of my realm to pay for any single fishing rod. With that said, if spending $1,300 felt like spending $300 to me, I would absolutely pony up the cash for this thing.

Overall rating on the rod - 4.5 out 5 with deductions for the reel seat and price.

MFC Madison II reel
The reel that came with the rod had a "River Rock" finish and let me say that this thing is a gorgeous looking reel that aesthetically complimented the rod better than I would have imagined. During the time that I had it, I came up with a few things I liked about it and a couple things I didn't.

What I liked about it was its appearance, the drag, and the feeling of a product that is well constructed. As I already mentioned, it is a gorgeous reel. The artwork that they applied to it is crisp and complimentary. The shape of the reel and spool is modern yet still holds a classic feel to it.

The drag was superb. While not overly powerful, it was quite smooth and consistent. While I only had a few fish really put it to the test, I am fairly confident that it would hold up to many many more fish that might want to give it a run.

The reel also felt solid in my hand. It wasn't dainty nor did it give any indications of frailty. This is important to me because I am very very tough on gear. When I buy a reel, I want something that is going to hold up to the occasional drop or ride in the bed of my truck. This reel definitely fits the bill.

The main thing that I didn't like about it was the foot. It has a very thick foot that didn't fit into the seat of the rod very well. It took some deliberate attention to make sure it was seated properly. The easy fix is simply to grind it down a bit, but I was not going to that on this combo since it wasn't mine....yet. Aside from that, it was a bit on the heavy side for a 4/5wt reel. I suppose that's because of its stoutness, but I feel it could be a bit on the lighter side.

The MSRP I believe is right around $215. The price in general seems fair and I would pay it without much hesitation. Overall, 4 out of 5.

Rio DT Trout line
I'll be the first to admit that I am not an expert on fly lines. I think that if I was to do a blind test with one line vs another, I wouldn't be able to discern between the two unless there was a drastic difference.

With that said, the line seemed just fine. It cast well, floated high and reliably, and seemed to be able to shoot easily through the guides. It also laid down quite softly and seemed to hold loops very well. I truly had no complaints about it.

Conclusion
Thank you to OBN, Rio, Montana Fly Company, and South Fork Rods for the incredible opportunity. It was a joy to be a part of this.

Photo's and stories about my time with this awesome set up can be found in the following links
Got Wood?
The Bamboo has been tainted!
Upping the Ante

*Disclaimer - I was temporarily provided the items free of charge with the understanding of providing a truly fair and biased opinion. Whether I raved about the products or called them garbage, my chances of winning the package in the end is the same. No other compensation was given for these opinions.