Should have slept in

The Fox river is a pretty new river to me. I have only recently started fishing it and with the help of some more experienced Fox River folks, I have been pretty successful.

In this short time, I have established some pretty reliable patterns there. Most of the times that I have fished it, it has been a reliable early morning/pre-dawn top water bite that transitions into a subsurface bite as the sun brightens the day.

With this pattern in mind, I picked up my fishing partner for the day just after 4am. About an hour later and with recent memories of fast and furious early morning top water bites dancing in my mind, we eagerly cast various top water poppers in hopes of a repeat.

After an hour and with the sun rising over the still lush trees, we didn't even have as much as a single blow up. The water seemed to be a bit lower than it has been recently and a cold front had pushed in along with its rains, so I assumed that was the reasoning behind our lackluster performance so far.

Not being one to throw in the towel right away, we retied to my favorite blue/white clouser combo that has produced so well this year. After another hour or so, the fish count hadn't changed. We made the hike back to the truck in hopes of better fishing at another nearby spot.

On the way, we decided to take a detour and stop at another hole that I had heard of but never fished. Upon arrival, it looked promising as there were at least signs of aquatic life. It took another half an hour of casting between the two of us before Shannon finally landed the first smallmouth of the day.

With this sudden shot of hope, we continued to work that area for another hour. I am not sure if he caught the only smallie in that area or if that fish had told the other ones, but we didn't have another bite on a variety of proven flies.

Once again we found our selves in the truck and headed to hopes of better fishing. We decided to go to the other spot that I had originally planned before the detour to the last one. We walked up river past three islands and decided to start there. The plan was to work downstream back towards the other two and ultimately back to the truck. As we worked the first island with the same proven flies that had been failing us thus far, we once again came up empty.

I took a quick break after that and said to Shannon that I actually might be feeling my first skunk in a long time. I took another minute to stretch and analyze the situation when it hit me.....

Almost every time that I had fished this river, it had been either cloudy or downright pouring rain. As I figured this out, an old mantra with unknown origins played like a broken record in my head.

I quickly pulled the fly box out of my pack and grabbed a mid sized chartreuse and white clouser. On the second cast, my skunk was officially over as a small ten inch smallmouth came to hand. He was quickly released and I sent the fly out again to the same spot. Wouldn't you know it, a big big hit! The fish fought so hard that I wasn't really sure what it was. The head shakes were frequent and powerful, the drag on my reel was put into play, and a smile lit up my face. Two casts, two fish, and all because I switched colors.

After a couple minutes of fighting the fish and the current, all 18 inches of this beauty were in the net! 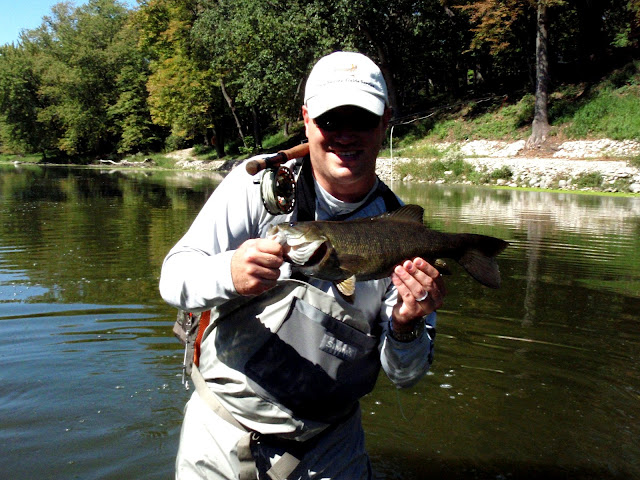 For the next couple of hours, we continued to work these islands with the new found secret to success. Between the two of us, we landed about 15 more fish with an average size of about a foot.

As we were nearing the end of the third island, I had another hard strike. As a matter of fact, it was harder than the last 18" fish and the fight seemed to be even stronger. The fish was netted and I was pumped to see that it was in fact bigger! 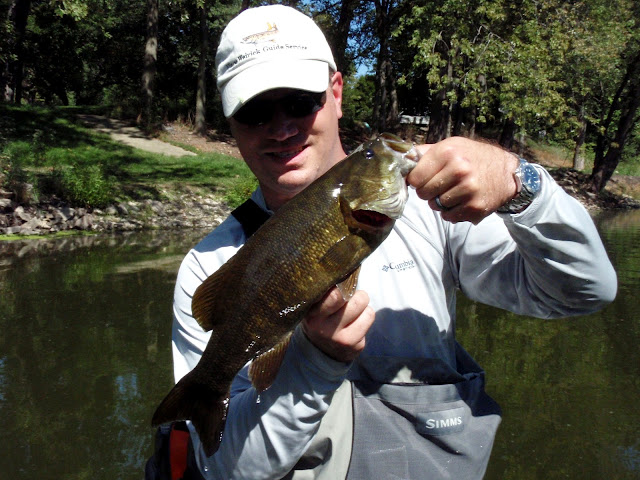 When you go from nothing in almost five hours of fishing, to finishing up the day with a second big fish on top of a dozen smaller ones, the feeling of accomplishment is greater than those fifty fish days.