Typically, when I sit down to write a blog, I have a pretty good mental scratch pad image of how the story will begin, all the stuff in the middle, and how it will end.

This story is different. Where do I begin?

Do I begin by telling everyone how awesome king salmon are?

Maybe I should start by talking about my uncanny ability to end up in the water pretty much every time I fish for these things?

How about the bionic possum?

Or maybe I should start it off with the fact that another electronic device has been ruined as a result of my pursuit for these fish?

I guess I'll start off by mentioning that I went fishing the other night for king salmon, aka chinook, and see where it goes.

Yep...in case you hadn't figured it out yet, I went fishing for the ultimate predator in Lake Michigan. King salmon are without a doubt, the baddest fish in that lake and a couple of times each year, they are catchable within casting distance from shore. While I have gone out and caught them trolling from a boat, it is a million times better when you can cast a crankbait or spoon and feel every second of the fight. It's just you vs. the fish from the bone jarring strike to the very end. No simulated drag from flashers and dodgers that are being dragged along at a couple of knots.

For many people, night time is the right time for kings from shore. People flock to the harbors of the lake and fish when most sane people are warm and cozy in bed. I am a crazy person and so are the other people that I went out with. They all have their own stories about the night and I am sure they will tell it, so I'll stick to my story.

A few people met up at my house around 5:00pm to carpool up to Wisconsin. By 5:30, we were on the road with high expectations of the hardest fighting fish that most of us had ever caught. Some people have caught these fish before, others haven't. We made a couple stops on the way up there for food, a practical joke, an initiation ritual for a new comer to the group, and some final snacks and drinks to get us through the long night. It was probably around 7:30 by the time we actually hit the water and started casting.

A couple of others that we were meeting up there had started fishing a couple of hours earlier and were already on fish. I can't speak for the others, but seeing a few fish on shore already made me even more excited.

For the first 45 minutes of the night, I was casting without much success, but a couple of other people had caught fish and it seemed like it was only a  matter of time. Sure enough, I sent my crankbait flying, started reeling, and then it happened.

*Side bar - For those who have never had the joy of hooking up with a king salmon on typical spinning gear while casting crank baits, I want you to imagine a feeling of all hell breaking loose. Every part of that fishing set up in your hands feels like it is about to snap into a multitude of pieces. You would swear that something is wrong with your gear and it's all about to be destroyed.

The fish was rapidly pulling line and thoughts of getting spooled were definitely on my mind. I grabbed the drag knob to crank it down even more but it was no use, this fish just kept going. Finally it stopped running straight out and started going left and right. I'd gain a bit of line and lose a bit of line. This happened for a minute or so and then things started to go terribly wrong.

You see, were were fishing on a sort of peninsula..... (See image) 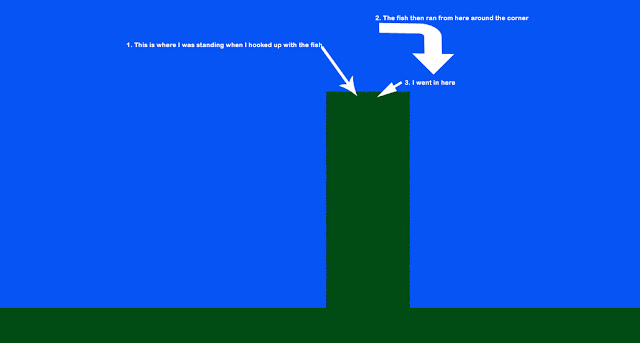 Now, as you can see by my illustration (item 2), the fish started to go around the peninsula. Because of this, my line was wrapping around my fellow angler's legs so I started to work my way across the rocks. As I stepped on to this rock (item 3), my feet quickly slid out from under me causing me to find myself completely in the water with a pitch black sky overhead.

I kept my wits about me and didn't panic. I swam over to another rock that was angled for an easy exit onto dry land. Once I hit that rock, I handed the rod off to another while I pulled myself out of the water. Once back on my feet, I grabbed my rod to resume the fight. When I got the line untangled from the rocks, my heart sank as I felt the weightlessness of a fish that was gone.

For those of you long time readers and others that have known me for a while, you may recall something about me, king salmon, and a sinking boat. If you don't recall that or want to relive the moment, you can find that story here. Well, exactly 5 days after the one year anniversary of my boat sinking while chasing these amazing fish, I once again found myself at the mercy of this freshwater sea.

After realizing the fish was gone, I did a quick personal inventory to make sure I wasn't hurt and didn't lose anything. As I dug through my pockets, I realized that my phone was in there. I instantly pulled the battery out and put it in my bag hoping for the best.

After that, I was determined for redemption. Surprisingly, and despite the falling temperatures and soaking wet clothes, I wasn't that cold. I continued to cast for another hour and a half in hopes of making it all worth it. Finally, around 10:00pm, I realized that this night was going to be over way before I wanted it to be without some dry clothes. A fellow angler and I did a quick search and found a  nearby WalMart that was open until midnight. We jumped in the truck, did some shopping, changed, and headed back to the lake.

Once we got back, I picked up my rod, made a cast, and sure enough....my equipment was being put to the test for the second time that night. As I battled this king, I was praying that it wouldn't take the same course as the last fish but still started making a plan in my head just in case. Fortunately, I was able to keep this fish from running all over the place. As a friend scooped it up with the net, I was fired up with happiness. All of these epic battles with the water, loses of boats, fish and electronics, it finally happened. I landed my first fall run king salmon. I had battled with a few of them before, but I was just never able to land one.

Throughout the rest of the night, I ended up catching another king and a big 10lb brown. Between the other six or seven people out there, I think we landed a total of 18 kings, 1 coho, and a brown. We lost at least that many more but as a group, we slayed them. Only one of the people in the group went home empty handed due to a drag that was set a bit too tight. Some of the guys took off just after midnight while myself and the three that drove out with me fished until nearly 5am.

Oh yeah...the bionic possum! I almost forgot about this thing!! From the moment we arrived, we were harassed by a couple of possum. They had no fear of people and were aggressively knocking over our drinks that would were literally next to our feet. They would go into peoples bagpacks without fear and steal food and drink. Nothing we did would scare them or keep them from coming back. If you stomped your feet at them, they would just stare at you and then continue stealing your stuff. In all honesty, I was rather nervous about getting bit from a wild animal that had no fear of humans.

I finally got tired of them and devised a plan to get rid the particular animal that kept pestering me. I knew its path to the rock I was on, so I laid a landing net out directly on the path. Within minutes, the possum was back and my plan worked. As soon as it stepped on the net, I grabbed the handle and plunged it in the water. The possum kicked and twisted under water for about a minute before it somehow escaped from the net! He crawled between a couple of rocks and just sat there while it tried to catch it's breath. I seized on that opportunity to quickly dispatch of him. I took the handle end of the net and got it lined up with its neck. With a quick and forceful lunge, I heard a snap and saw that I had finally gotten rid of him.

I'll admit, I felt bad. I don't like killing things and don't hunt. I just couldn't help it with this thing though. I felt threatened and worried about my safety as well as the other anglers around me. What would happen if this thing bit one of us? Rabies, stitches, etc...? No thanks! Imagine my surprise when about fifteen minutes later, I hear a rustling and see that the possum was not there anymore!! What the hell?! Did something try to eat it? NOPE! He was alive!!

How could that be? I know I felt it's neck crack. I just know it! While I didn't see it again for the rest of the night, I felt a little better knowing that I hadn't killed it after all. On the same note, I feared a well deserved retaliatory attack. Luckily, it never happened, and I think that I at least gave the possum a reason to fear and avoid humans. Perhaps my failed attempts will have ultimately saved that animals life in the end? I sure hope so.

In the end, the night was awesome. The fishing was good and the company better. I am still amazed at how much these fish will test your gear and your commitment. Every crank I had has upgraded hooks and snap rings but I still managed to bend two of them, and completely snap another. I highly recommend that everyone get out there just once to see what these things can do. I have a feeling that once you do, you will be a king addict just as I am.

With that, here are a few pictures of the haul. Please note - I don't generally keep fish and am pretty much a strict CPR angler. These fish were kept because they were at the end of their life cycle as salmon die after they spawn. The fish were all harvested for eggs and any meat that had not started to turn yet. They did not die in vain. 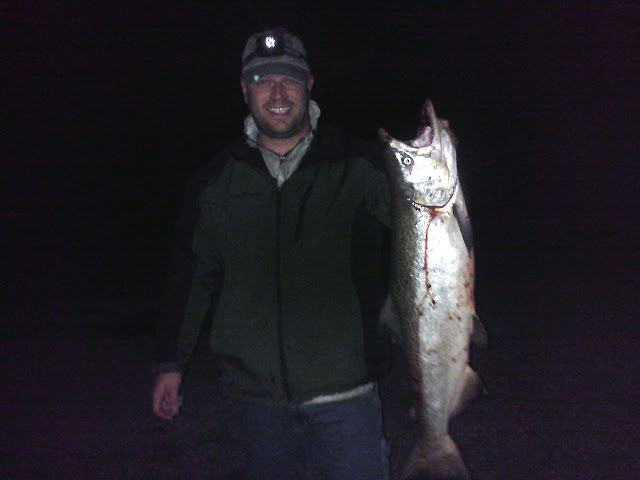 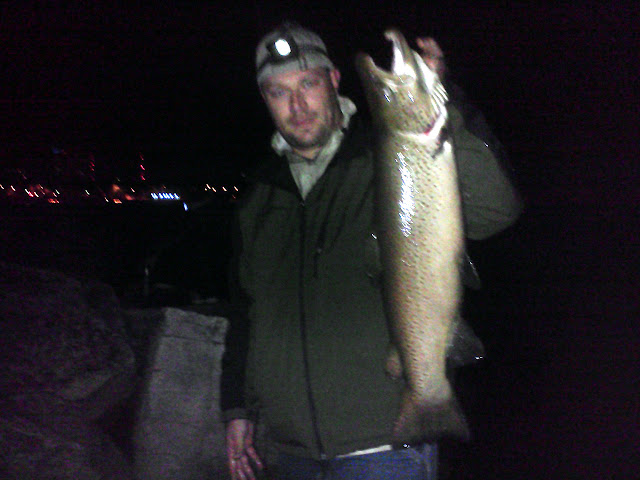 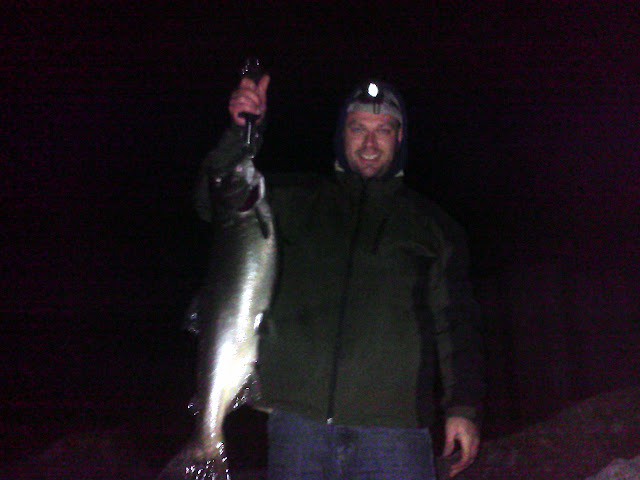 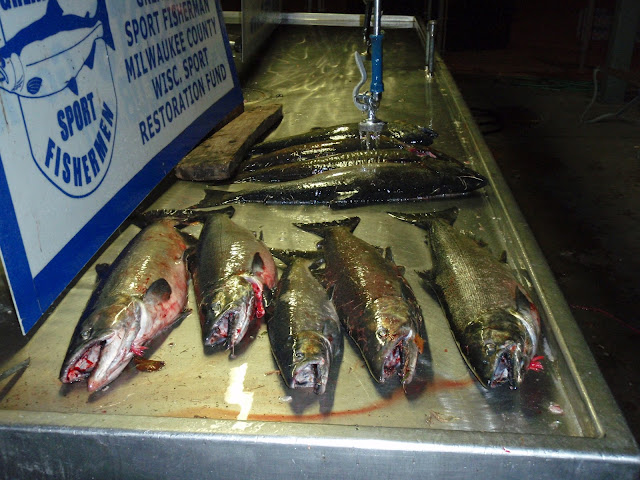 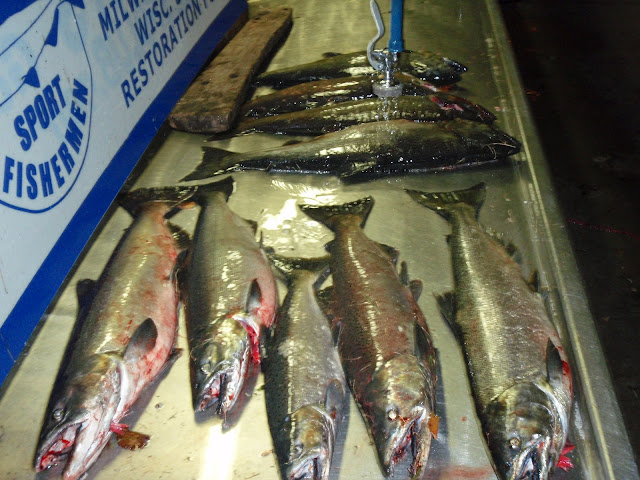 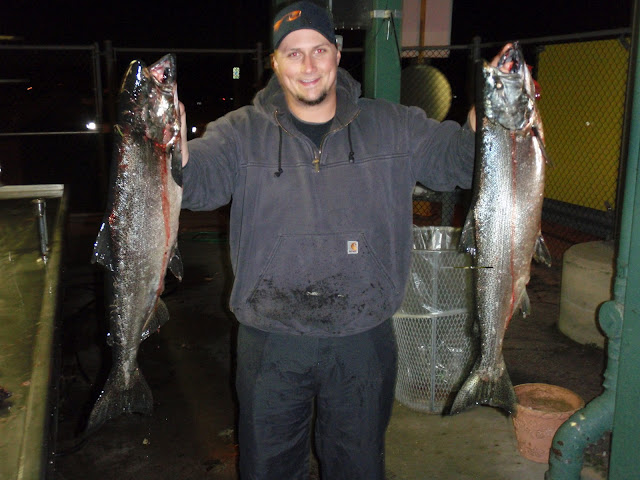 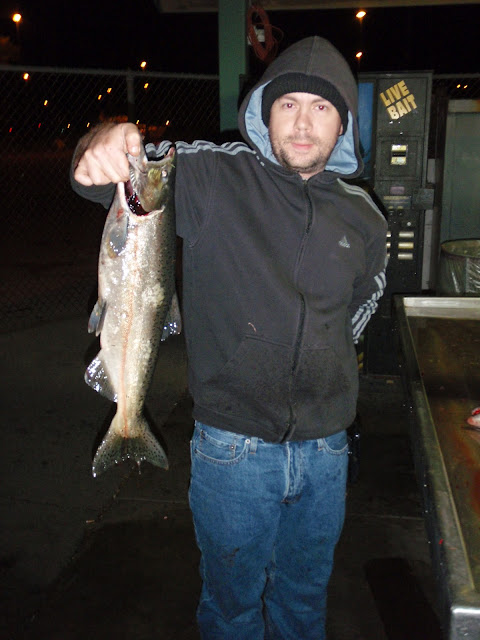 I'm hoping to get out at least one more time this year. We probably have about 2 weeks left before they start becoming zombie kings and the end of the run.