The Bamboo has been tainted!

When Daniel made the comment/asked the question on my last post about receiving the bamboo fly rod, " Your not going to try an hook a carp with that thing now are you?" I couldn't help but feel like Dr. Evil and do my best, overly sustained, evil genius laugh!

Sunday afternoon rolled around and I just couldn't let that thing sit there anymore. I geared up and headed to the local section of the Des Plaines River to scrath that itch.

Last time I was there, crappie were abundant and willing, so I tied on my little leech pattern that they seemed to love and hoped to find them again. No such luck would be had, but I did manage to find several willing sunfish.

While these were not big, it at least gave me a teeny bit of insight into what to expect from this rod when fighting the real targets....

For those that will get their opportunity with this rod after me, here is a sneak preview of what to expect. When you first receive this thing, you will look at it like it's a priceless painting. You will be in awe and full of ancient feelings of our fly fishing friends in the sky that have paved the way for us today. You look at it and assume its frailty.  Though it's a newly built rod, you still feel like it has a history...and it does...it's the history that we fifteen are providing it. It's also a history that you are terrified of destroying.

The fact that Ken G was unfortunately the first to break it doesn't really help those feelings but the show must go on.

Soon, in spite of your feelings and fears, you will want to do nothing but fish this thing. How could you not?

Once you mount that reel in the seat, run your line, pick your fly, and start casting, all of those fears are put to ease...mostly. Almost instantly, you will feel the strength of the rod in your hands. It resonates which each abrupt stop in your casting stroke. It's not fragile at all.....it's solid. It's strong. It's capable of just about anything you want it to do.

With this new found confidence it the rod, I headed out the next day in search of my true target.

The conditions were wet, windy, and stormy. I spent more time waiting out passing storms than I actually did fishing. Finally, after about an hour, it was fishing time. I saw a target that was just out of casting range - not in distance but in direction. The fish was at my 1 o'clock and I had a grassy bank that towered above my head by a good five feet at my 7. I patiently waited as the fish moved to my 12 which finally allowed me to cast almost parallel with the bank.

The fly landed, the fish turned and went down. He took it.

I closed my eyes as I aggressively strip set the hook fearing the sound that we all dread...the snap. As the rod loaded under the weight of the fish, I heard the water explode and I opened my eyes. No snap...just a fish running toward deeper water.

As I feverishly tried to reel in the excess line at my feet, the reel hit the water! Dammit! I didn't lock the reel down well enough!!!

I quickly noticed a patch of weeds just in front of me, so I used the rod to wrap the line around them in an effort to keep enough tension on the line while I tried to remount the reel. After fumbling for a minute, the reel was mounted and secured.

"Is he still there?" I anxiously wondered.

I unwrapped the line from the weed patch and sure enough, he was still on. He wasn't done with the fight either. He ripped some more line for about ten seconds and I started the battle to get him in. A while later, I deployed my folding net, scooped it in the water, and hoisted him to shore.

It's official....the bamboo has landed it's first carp. 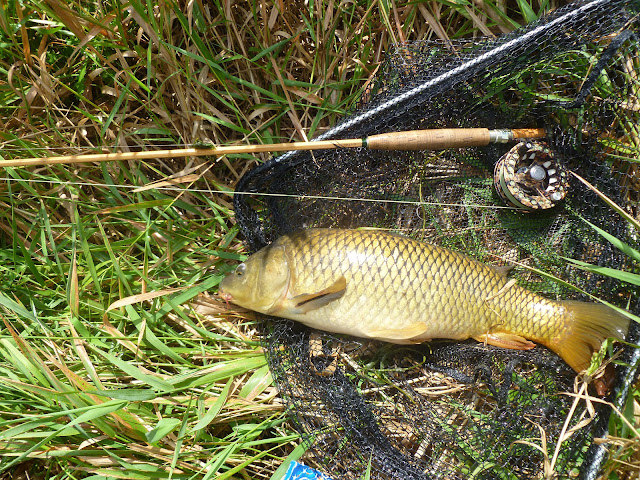