Singing in the Rain

A rare thing lately, a very rainy day, got me excited to do some fishing. Given the conditions, I had just the place in mind so I decided to show Woz a spot on the Fox River that was passed down to me by a Ed from FSA Custom Rods.

We didn't start until 11am, but with the rain and cloud cover, I didn't think that the late start would matter.

We started fishing the river in what I refer to as "D" water. It's a shallow spot with muddy water that has only produced one fish for me on the occasions that I have tried to fish it. This day yielded the expected results - no fish in the "D" water. We walked and cast our way to "A" water and like I suspected, fishing was great!

We fished in rain that varied from a light mist to torrential downpour but it didn't matter to the fish. They were everywhere they were supposed to be and feeding heavily. We tackled the river and the weather for about four hours and landed over thirty smallmouth, a couple of largemouth, and a carp.

Most fish were in the eight to twelve inch range, but a few bigger fish came to hand. Woz had big fish of the day that eluded the camera due to a technical error on my part. The fish was a solid 17" and put up a great fight for him. As a matter of fact, it was a personal best for him and I really feel bad about missing the picture. My bad, buddy!

The fly of choice seemed to be a #6 clouser stripped very fast through any seam and eddy you could find. They were also found on the down stream side of any sharp drops where they could ambush food as it came over the top. A couple of fish were puking up crayfish but I didn't have any suitable crayfish patterns that were heavy enough to get down in the current so I stuck with the clouser. I suspect that a better number of larger fish would have been caught had I brought something. 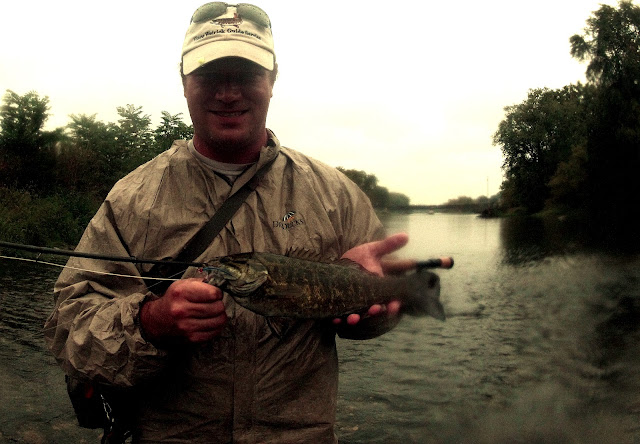