You call that a fight?!

I got out of work a few minutes early yesterday and headed to some nearby carp waters. This water is loaded with carp but presents a several major challenges. One of those challenges is access - it's about a mile trek off road so a vehicle with some decent ground clearance is a must. A lot of times, 4x4 is required due to some extremely muddy conditions.

Once you get there, access to the water itself is tough because it is completely surrounded by trees, bushes, and thorns. This not only complicates water access, but also really complicates casting. The final challenge is the absolute lack of visibility in the water. I would estimate visibility to be around 6" at best!! The water is so muddy, it's ridiculous. Since fly fishing for carp is such a visual game, you can imagine how much this complicates things.

Through all the challenges, I managed to hook up with three fish in the short outing. I also left my "go to" fly in the fly box and instead, tied on a couple of flies that I got in the latest carp/catfish/bluegill swap that was hosted on The Fly Fishing Forums. Two takes came on a fly called The Blind Squirrel that member stl geoff provided.

I lost the first fish when he rushed directly at me and I just could keep any tension on the line. The second escaped capture by breaking my line. It was my own fault as I made the classic mistake of not checking my leader....that baby was frayed!

I changed leaders and tied on a Rainy's Popcorn Ball that member Joni provided. I spotted a carp sipping something from the surface so I placed the fly about two feet in front of the carp and he sucked up like a contestant in a milkshake drinking contest. I set the hook, the fish bolted towards shore, hit a stick (and therefor spooked himself), jumped a couple of feet out of the water and landed on the grassy bank - fight over.

From hook up to landing, it was a five second battle. While brief, it was quite entertaining! 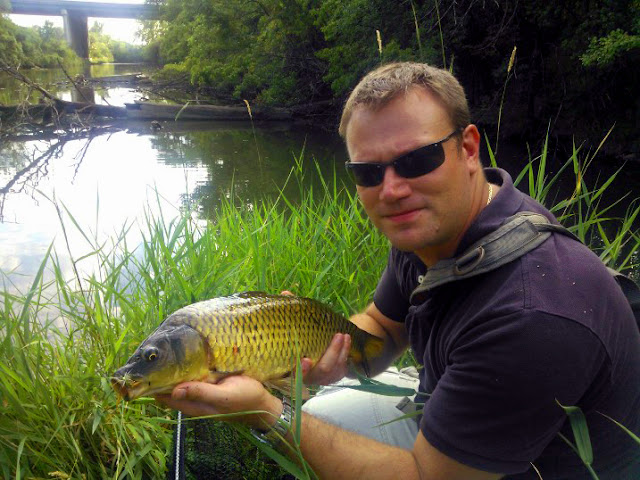