I picked up my fishing partner for the day around 6:30am and headed out to one of my favorite spots that I call "Hook-set Surprise" because you practically never know what you hooked up with until you actually land it. I suppose the one exception to that would be if you are sight fishing "Carp Alley" which feeds directly into Hook-set Surprise. With that said, we did decide to start off at carp alley.

At the start of that stretch, carp were feeding heavily on the surface, and just below, so I tied on a blind squirrel and made my first cast. A nice fish made a run, but I blotched the hook-set. As I was false casting to another target, the blind squirrel decided that it belonged in a tree and did not want to let go. I was trying my best to finagle it out of there when my replacement TFO BVK suddenly turned into a six piece rod.

For my regular readers, you may remember that I already broke a BVK not too long ago....this would make the second one

Now, I know that it may seem like the BVK is prone to breaking, but I have been able to conclude that both instances are most likely my fault.

Broken BVK number 1: sections started to pull apart and I failed to check them. Once I torqued on the rod, it split right on the female section. Makes sense - I should have checked that. As a rule of thumb, I now check the sections every hour or so of casting.

Broken BVK number 2: The rod is longer than the bed of my Nissan Frontier and when I put it in the back, it tends to rest in a small notch between the gate and the bed. It seems that repeated trips back there had left an indentation that I only noticed after the rod snapped. If you look at one of the broken pieces, the mark is easy to see. Lesson learned and I will be putting my rod rack plan into action!

My buddy and I stayed for a bit, while he cast and I played spotter; then vice versa. Finally, around 8:30, I said let's go to BPS so I could by a temporary rod and at least fish for the rest of the day. We got there at 9:05 and found out they don't open on Sundays until 10! What the.....beep

We sat around until they opened, bought the only 8wt that they had in stock that seemed to fit the action I wanted, and headed back out.

By the time we got back to fishing, it was 11:30 and hot!! The carp in carp alley had all headed for deeper water so we hiked out to hook-set surprise. I quickly hooked up with something that got off after about 30 seconds - I think it was a large gar judging by the ferocious hit. My buddy was next to hook up and after a good battle and several huge jumps, a nice 40" gar posed for a photo. (fly of choice was a chartreuse/white clouser minnow)


After a few more hook ups, we made a quick drive to another carp hole. Though the carp were there in large numbers, the water here was clear as chocolate milk and the clouds were blocking the sun more often than not. After a bit of patience and stalking, I spotted a big set of shoulders rooting in some green surface scum so I hurled a heavily weighted backstabber just in front of the exposed back. The carp seemed to have spotted it and inched towards it. I couldn't see the fly or the fishes mouth, so I went with my gut and set the hook when I thought he was close to the fly. Sure enough...my gut was right. He took off, scared a half a dozen previously unseen carp, and started running. After a ridiculously hot game of tug-o-war, it was time to smile for the camera. I also got to put the drag on my new Allen Alpha II to the test...smooth as butter, but more on that later!

Mr. P recently wrote a blog about having a scale and man I wish I did!! This, I think, was my personal best on the fly so far and I guestimate it at 20lbs - no scale though so I am simply guessing but look at the shoulders on that thing!!!! 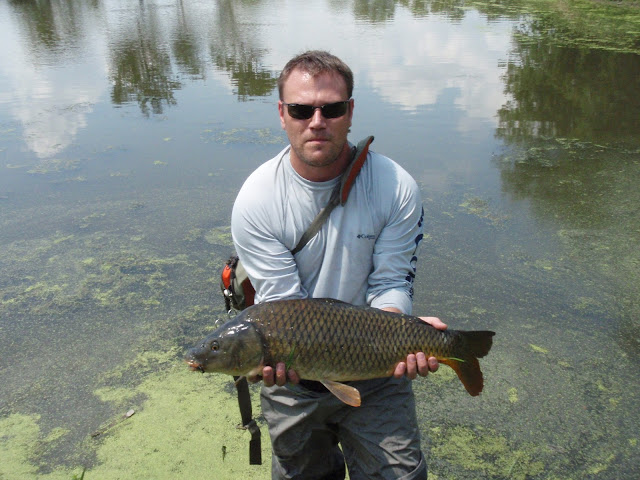 For those wondering what rod I picked up, it was a World Wide Sportsman Gold Cup, 9', 8wt. I will be returning the rod because I absolutely hate it. It's heavy, stiff, and vague. It is sold as a salt water rod, so maybe it would benefit from over-lining or real heavy sinking line, but I don't really care to find out. I think when I return the rod that I bought to BPS, I will pick up a scale so I can stop guessing.