The carp slayer is finished! 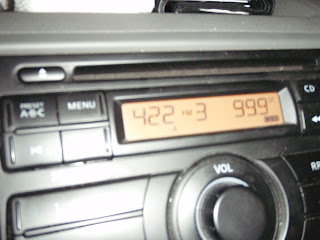 On a cool, crisp, Sunday morning, I left the house around 3:15 in the morning. I picked up my buddy Shannon and we arrived to our destination on the Fox river by 4:22am.

Ed, from FSA Custom Rods, was meeting us there at 4:30 to hand over my custom 6wt, aka The Carp Slayer, and to get in on the early morning top water bite for smallmouth.

4:45 rolled by and I realized that Ed slept in, so I sent him a couple texts to wake him.While we waited, I headed into the gas station and bought some Tums for my tequila and Mexican food induced churning stomach.

Finally, around 5, Ed made it and handed me my first custom fly rod. I admired what I could barely see for about a minute and anxiously mounted up the reel and said let's do this!

I really couldn't wait to cast this thing. I tromped through the water with as much stealth as a black lab jumping off of a dock to chase a stick.  Once far enough into the water, I started casting a deer hair popper that I had tied on in anticipation for that exhilarating top water smallie bite.

Yes...I know....the title says "Carp Slayer" and I'm talking about smallies. It's 5 in the morning, smallies on top are a blast, and I have a new custom fly rod - I'll get to the carp.

Within five minutes of casting it, I fell in love. The rod is a little softer than I had anticipated, but it's still so crisp and responsive. It's one of those rods that truly benefits from the "less is more" approach.

A quick, effortless, snap back followed by a snap forward, sent fifty feet of line over my head in a sexy tight loop while another ten feet of line shot past the titanium/ceramic guides.

Another five minutes pass and I am stripping the popper back when my first explosion comes! I set the hook and the popper came flying back at my head.

Ed hooked up with a couple that let go. Then he hooked up again and got broken off. Finally, he connected again and landed a beast!

We snapped a couple photos and I was back to casting. 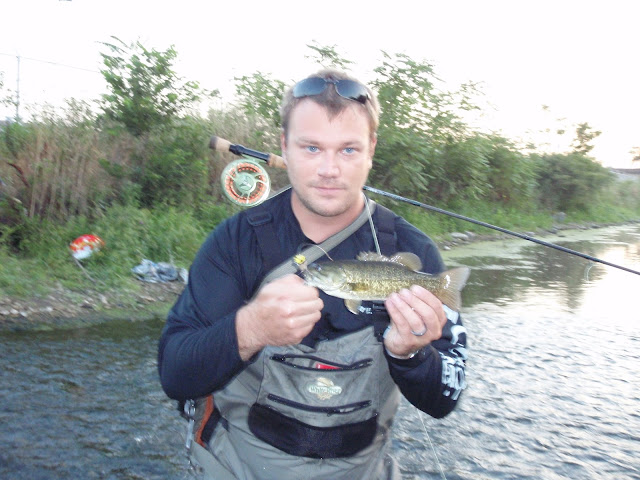 Not a huge fish by any stretch of the imagination, but within 20 minutes, the new rod had officially landed its first fish

Shannon was next up and landed a similar sized one. A couple of casts later, I missed..again. Then he followed up and nailed a nice twelve incher.

Just like that, the sun made its way over the tree tops and the top water bite died as the smallies went racing towards deeper water.

We switched tactics and started going deeper for the fish. I landed one more on a variant of a fly called the Patuxent Special. Ed also hooked up with couple nice fish in successive order. 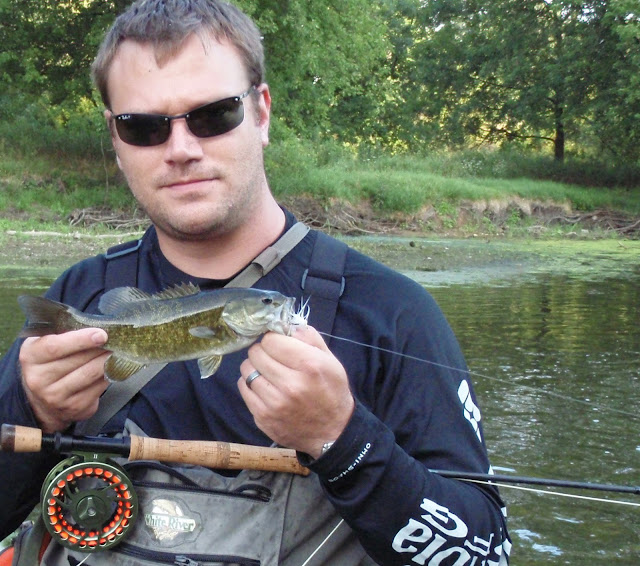 A few minutes after this fish was released, Ed had to take off so Shannon and I started focusing in on carp - the true intention of this rod.

What I ended up realizing is that the Fox River is loaded with suckers...not carp. After about an hour of looking, we finally found two pods of commons. They were all slurping dead gnats off the top and everything I had on me was geared towards suspending and rooting fish. As a result of this, I failed.

Shannon on the other hand was prepared with a fly that I have done quite well on for surface sucking carp - the devil bug.

He plopped the fly a foot from one of those open mouths and quickly caught the attention of the fish. After slurping the fly, the hook was set, chaos ensued, and Shannon landed a chunky football of a carp.

That was pretty much it. It was about 10:30 in the morning and we were tired and ready to go. I learned an interesting lesson this outing, though. There is a big, big, big, difference between good carp water and water with a lot of carp.

I'll be putting the carp slayer through the paces soon enough so stay tuned for a full review on the rod.