Since February of 2011, I have been trying to set up a time to go catch one of the fiercest freshwater invaders of our time, the snakehead. Unfortunately, despite several trips to snakehead territory, I had been unable to make that hunt a reality....until now.

I once again met up with my local D.C. fishing buddy and fellow blogger Kirk Mantay at a boat launch on a local Potomac River tributary that is very well known for producing big numbers of snakehead. He brought two kayaks with him so we could get into the dark and swampy places that those fish thrive.

After getting the kayaks set up and the gear loaded, we began our paddle. I was generally quite surprised by how remote the area felt considering it was less than an hour drive from our nations capital. Aside from an occasional dock, there were almost no signs of modern human inhabitants. Even the docks that did exist, seemed to be rather rudimentary in design and construction. There was one particular dock that as we paddled past, triggered that little banjo riff from Deliverance to start playing in my head. Even Kirk thought it stood out and commented, "I'm guessing that dock didn't have any permits." I chuckled as I noticed the various lengths of pilings as well as this little shack at the beginning of the dock and the visibly rotting wood.

We paddled on and came across an enormous field of lilly pads. That was the spot I was looking for with it's dense pads, access to deeper water, and shelter from the wind. We paddled along the edge of pads on the main river until we arrived at a channel that seemed to open up around the whole field. That channel ranged from six inches to three feet in depth with various logs and other natural structure aside from the lily pads on the inside edge.

In addition to the structure that nature provided, there was another reminder of the rivers age and history in the form of what I can only assume was some sort of early water treatment plant. There all sorts of rusted and dilapidated iron structures intertwined with captured  branches that had floated down the river at one time or another.  It was clear that whatever this was has been abandoned for many years and given it's location, I am sure that it contributed to our nations history is some relatively significant way.

As fascinating as these old structures were, I was here to catch a snakehead and I could no longer wait to do just that. While Kirk focused on the wooded structure to the outisde of this small channel, I focused on the lily pads and was drawn to a small bay within the field of pads. It seemed like a prime ambush point to me and had very distinct edges. I like when I have multiple edges in a small section like weed to deep water or lily pad to millfoil and this bay had both. I cast my favorite frog out to the edge and let it sit for a few seconds. I put my rod down so I could paddle into a slightly better position. Almost as soon as I picked up the paddle, something exploded on my frog. I dropped the paddle, grabbed the rod, pulled up the slack, and set the hook. Unfortunately, I was bit too late and it had let go by the time was able bury the hook in its mouth.

At this point in the tale, I am going to jump ahead a bit. I had seven major blow ups and genuine opportunities at fish. Of those seven, I landed one long but spawned out bass, missed one definite snakehead, and one other that I am pretty confident was a snakehead. The first strike was the one I had suspected was a snakehead. While I missed the hookset, I saw the body for a second and that was either the longest bass I have ever seen or it was a snakehead.

In regards to the one definite snakehead miss, here is what happened. After fishing the field of lilly pads, we crossed the main river to another lily pad and weed patch. This place was teeming with activity and I was pretty sure it was mostly snakehead in there. I laid out a cast from the main river to the edge of the pads and had a pretty quick strike. I set the hook and line instantly started to be stripped from the reel. I have caught a few 5lb bass in my life and they might peel a few feet of line....this fish pulled about forty. Could have been a huge bass? Sure. But its fight was different than anything I have felt before. I felt the fish go deep into the super thick millfoil and the weight began to feel mushy. I cranked the line through it and felt the release of weight from the other end. The only thing that came up with the frog was a big clump of millfoil. I let out an echoing obsenity as my frustration got the best of me for a split second followed by a laugh of excitement.

We paddled in to the launch and as we approached, I noticed a young boy, maybe about 12, and his grandfather landing what seemed to be a big fish. As we landed the kayaks, the man and child came closer while dragging a great example of what I had come for...... 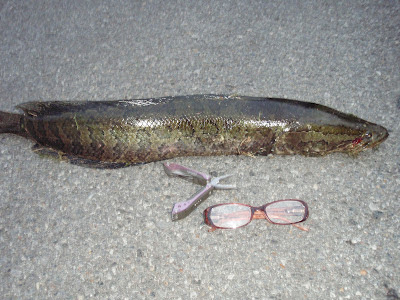 While I still haven't caught one myself, I was incredibly happy at the amazingly well timed opportunity to at least see one up close and personal. It's an amazing fish and once you handle one, you will understand its reputation as a violent fish that will try to destroy anything it can. I will be back again to catch one myself and rest assured, I will catch one.