As a baitcasting guy turned fly fisherman, I have been pretty held back by one major aspect....frogs.

I have been searching for a frog pattern that I could take into the nastiest swamps, scum, and not worry about getting it hung up constantly. I have had little faith in the mono weed gaurds that most fly frogs have and therefore, hesitant to fish any real heavy weeds.

What I needed was a frog like I used to use when I would throw conventional tackle so I grabbed my old tackle, pulled out on of those frogs, and started analyzing. There was a single main difference between that frog and all of the fly frogs that I have seen so far - a hollow body. That body would hide the hook points from lilly pads, branches, and scum but would easily collapse when bitten.

After this conclusion, I started sketching and figuring out how to make a fly that had these characteristics. My first prototype looked like this 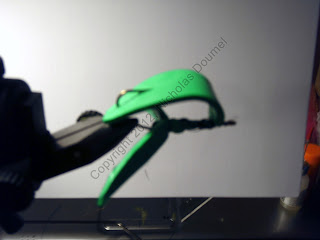 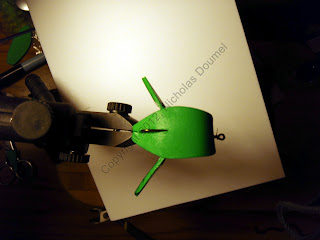 I tied this rather loosely because I wanted to be able to remove the body and make adjustments to it if needed and then a final template. I then took to the test pond and instantly realized that I had to make it land hook up almost all the time. I also noticed that it tended to sit nose down so I was going to have to add that weight towards the hook bend to either level it out of make it's rear dip down below the nose - like a frog. Aside from that, it caught fish! I had several blowups on it and landed three bass in a bout 45 minutes. Once the hook point issue was resolved, I would feel better about its weedless abilities.

After a few more modifications like adding rabbit strip legs, weight, and a bit of the shape I am at version 2. I haven't thrown on the fly yet, but sink tests seem great so far! Out of 25 throws into the tub, 21 of them landed hooked point up. The rabbit legs definitely add to the proper shape and feel that I looking for, but I will probably be changing these to some other material or using a different method of attachment and shaping. I also need to play with the rear weight a bit more to see if I can get a bit more squat without drowning the frog.

The first chance I will get to test this version is probably not going to happen until the end of June sometime as I will be out of town until then. Until then, here are some pictures of BFA's Swamp Frog V2. 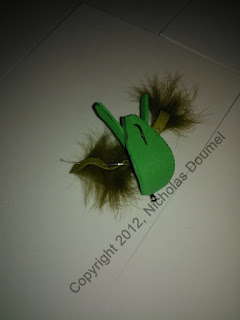 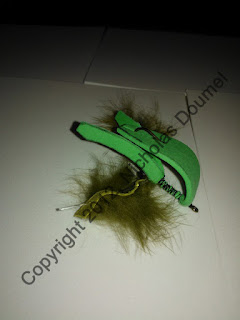 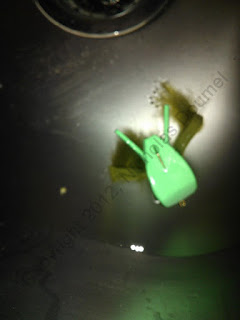 © 2012, Nick Doumel
By BrookfieldAngler
Email ThisBlogThis!Share to TwitterShare to FacebookShare to Pinterest