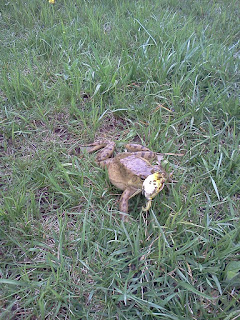 Emails have been flooding in the last few days..."Hey BFA, are you OK?" or "Where the heck have been?"

OK, you got me - I have received no such email.

But really, I haven't had a ton of stuff that I have been too terribly inspired to write about. I think my last post was so gripping that I feel a certain amount of pressure to keep up that level of spellbinding writing and to be honest, it's really tough.

I liken my predicament to the one hit wonders of the music world. You know the ones I am talking about; hits like Come on Eileen or Mickey or Earth Angel or Achy Breaky Heart. Some things are so amazingly fantastic that you just can't possibly make anything that awe inspiring a second time. It would be like asking Michael Angelo to make a second Sistine Chapel.

No really, I am

Seriously though....I have only been out a few times this month

The first time was with Randy Bush from Predator-Pursuit. Typically, I am chasing muskies with Randy, but not this time. Instead, we jumped in his boat and headed out to the big lake - Lake Michigan. In case you forgot, the last time I was out on that lake I sank my boat, so I was initially a bit apprehensive but I soon forgot all about it. We were doing something that I have never done on Lake Michigan; trolling for salmon and trout. The weather was fantastic, but the fishing was dismal at best. We put in hours upon hours on that lake only to land one lousy coho. While it was tasty, we sure had hoped for more.

The day had started out quite promising, too when one of our dipsey divers got hit almost immediately. Unfortunately, that resulted in nothing. The biggest heart break came at the very end of the day when were starting to pull in our lines and all of the sudden a remaining rod got slammed. It hit so hard that the 30lb mono line snapped almost instantly. Just seconds before, we had marked a biiiiig arch on the depth finder so we assume that it was that fish that nailed the line.

Although the fishing sucked, it sure felt good to get out and I still had a great time.

Aside from that, I have been to "my pond" a couple of times. Fishing there last year really started to decline despite the lack of fishing pressure. Quite frankly, I thought I was the only one fishing it so I was stumped how it could be that bad. Did I really put that much pressure on it all by myself?

My answer started to come in little clues towards the end of last year when I started noticing a few snagged lures here and there. I assumed that it was probably just one other person because I have never seen another person there. This year, however, I finally did run into a couple of people fishing and I was less than thrilled about it.

At least I am now understanding why fishing has been declining....

Fast forward to this year...fishing this month has been incredible on my pond!! I have caught a heap of fish and have discovered what an amazing amount of diversity exists in this little pond.

In addition to those fish, I have caught a few bull head and a nice sucker from that little pond. The difference between last year and this year - I am doing it all on the fly which I guarantee is something these fish haven't seen before.

Finally, a couple of weeks ago, I did a radio interview with Dale Bowman - columnist of Stray Casts and host of Outdoors on 91.1FM - WKCC. We get into all sorts of things like "trash fish, blogging, and fishing in general. The interview is set to air on the 23rd. If you miss it, a podcast will be available after the initial airing. I was honored to be invited as a guest and had a fantastic time. After the interview, I met up with Kankakee River fishing legend, Norm Minas and spent a couple hours chasing smallies. Norm ended up with a pretty nice one and I ended up with a smaller one at the very end. It was great meeting Norm and I can't wait to fish with him again. 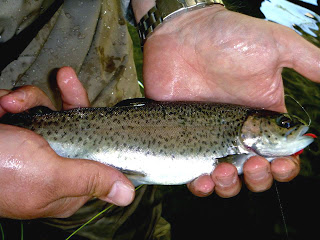 After leaving Norm, I met up with my buddy Sam who was slaying the stocker rainbow trout at Rock Creek which was just a few minutes from where Norm and I were fishing. After a few minutes, I brought my first rainbow on the fly to hand.

So there you have it folks...thanks for listening