My latest projects at work led me, once again, to Washington D.C. for the 2012 Satellite convention. Knowing that I would have a day free in the middle of the trip, I decided to get a hold of Kirk from the blog River Mud and see if he felt like playing guide for the day. Within hours of my inquiry, Kirk responded and we started hammering out the details.

Initially, I wanted to target some trout. I have read that they stock the crap out of a lot of the streams out there with rainbows and browns. Unfortunately, the reports that Kirk was hearing on trout were dismal at best. On the contrary, the bass, chain pickerel, and panfish reports were sounding great, so we settled on them! 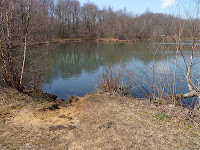 The first spot that we fished was a little lake that showed signs of life the instant we laid eyes on it. Bass and gills were sitting shallow soaking up the warmth of the mid-March sun.

Sounds of nature were abundant and unfamiliar to me. I heard a croak that I have never heard before and asked Kirk what it was. He informed me that I am hearing the sounds of a gray tree frog. He also told me that actually seeing one is incredibly difficult for a couple of different reasons. The first reason is their relatively small size. The record length, according Maryland DNR, is 2-3/8" long. The second reason is how incredibly well they blend in with the environment they are in. 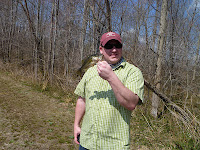 Fishing, in spite of the activity in the water, started off slow. The fish would follow and watch the lure, or fly, but just didn't seem too interesting in actually eating anything. As I observed a few other people fishing this little area with huge fishing poles and reels, I realized that the same problem of over-fishing and highly pressured waters that we face in Illinois and NW Indiana also impacted many of the waters of Maryland as well. Some time later, Kirk shook the skunk by landing a nice little large mouth he caught on a dragon fly lure. Not long after, he caught another one and I think one more after that. I had a couple of bites, but found myself struggling in the weeds with snag prone flies. 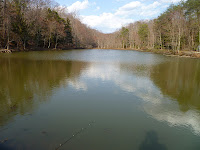 Before too long, we decided to head to another place that held bass and pickerel. The intriguing thing about this spot was that it had been closed to the general public for many years. Only recently had fishing been opened and it was very restricted. Only 30 passes are sold to the public and the cost is $50 for a 3 month ticket. Luckily, Kirk was pass holder and I was his guest. As we arrived to the lake(s),I was pretty excited. This looked like one of those places where I could easily dissect and nail a ton of fish with some flippin' and pitching, Live Target frogs, and some Sims Spinners. Unfortunately, I only had the fly rod and the cover proved too tight for me and I spent a lot of time picking my flies out of trees. Kirk on the other hand, was able to get his spinning gear into the tight places and managed to pull a couple of bass out of there as well.

By the time we were finished there, we were both getting hungry so Kirk took me to a little fish market/restaurant that he knew of where we chowed down on some flounder, clams, and crab cakes.

Even though I didn't catch anything that day, other than trees, I had a few things to be happy about. For one, I got to meet another blogger which is always great to put a face to the blog. The second thing is that I got to learn a lot more about the area. As many times as I have been to DC, I have never really gotten out and explored it.  It seemed very daunting to the outsider and being unfamiliar with local fishing rules and public access laws, I just never ventured out. The third thing that I left with was even more knowledge that there are times when the fly rod is better than conventional tackle and times when my conventional stuff will be a better choice.

My next trip out there will be in June and I am thinking of finally going after the infamous snakehead!

Stay tuned for day 2 of Maryland fishing!
By BrookfieldAngler
Email ThisBlogThis!Share to TwitterShare to FacebookShare to Pinterest