With winter coming to an end - not that I'm sure if it ever really started - I have the dirty deed on my mind. That's right, I'm talking about pike spawning! So I did what anyone would do. I grabbed my fly rod, some freshly tied pike flies, and headed out on a mission to see if the run had begun. 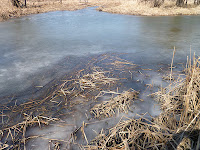 First, I decided to check some areas that are proven spawning grounds. I quickly realized that the river was much too low for it to have spilled over into the grassy grounds where I vividly remember wading for miles in search of territorial toothy critters. As I continued through a dry grassland, I headed towards a few areas that I know hold water throughout the year and have a pretty regular connection to the main river. Upon my arrival, I was let down by the ice covered backwaters. With this discovery, I quickly concluded the spawn has not yet begun.

With my mission seemingly concluded after only an hour of hiking, I decided to check out some wilderness that I have been wanting to explore for quite some time. I had a mental snapshot of the Google Earth satellite imagery in my head, fly rod, flies, and a small snack so I headed off in a new direction.

The hike started through a narrow game trail that was riddled with massive thorny vines and overhanging branches. After about twenty minutes of hacking my way through that mess, the trail finally opened up to a swampy field that was adorned by cattails as far as I could see. I knew this was going to be tough hike, but I kept on towards a wall of trees that I could see a mile or so ahead. 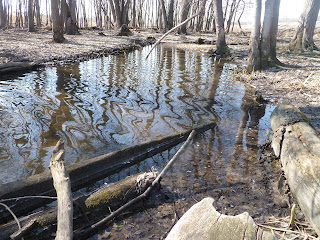 Upon my arrival, I found a picture perfect feeder creek that fed directly to a permanently linked backwater area of the river. The water was crystal clear and looked like it is constantly connected. If you look at the picture to the right, you will notice that the creek dog legs to the right. Just upstream a few hundred yards, the creek turns into a snake like ditch that is surrounded by grassy banks that is everything I look for when I look for spawning pike. With this discovery, I felt like I accomplished a great amount. The disappointment of no fish seemed to instantly disappear. No longer did I even feel the need to fish.  At this point, my mission turned into a walk through the woods.

I continued towards the main river that I could see a quarter mile down the edge of the forest taking note of the incredible presence of river trash. I was amazed that so much garbage could be found in an area that seemed so remote. The banks of the river seem to be incredibly effective at trapping anything that floats in a river during times of flooding. It's almost as if mother nature does it on purpose for the sole purpose of cleaning up after its biggest enemy. 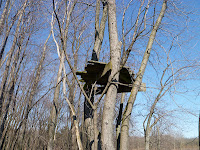 As I continued through the forest, I found the remnants of an old tree house or hunting stand. Again, I noted the seeming remoteness of this place. I couldn't help but wonder about this structure. Who built it? Why? When? It was clear that it hadn't been used in many years. Even the rotted wood looked as if it was older than what one would imagine. I took a few minutes to snap a few photos and continued on my way. Soon, I was at the edge of the main river and decided to follow that back to my truck. I had about a mile to go and I wasn't really in any hurry to do it. I slowly made my way being sure to not step in any holes. I worked my way over rotted and unsure logs that had made their home on the floor next to the river's edge. Many of these logs had been there for so long that they were completely hidden by globs of overgrown and matted grass. After twenty minutes or so, I noticed an area that was clearly a bedding ground for deer. I stopped to see if I could get any good fur for some flies and was treated to a pretty good selection. As I was collecting a few clumps, I couldn't help but notice a faint smell of decomposition. As I looked around, I quickly discovered the rotten and well cleaned skeleton of a buck that no longer ran through these woods. I hoped to find the antlers, but after ten minutes of searching, I gave up and continued on my way.

A short while later, I was back at my truck and headed towards the house. As I pulled away, Supertramp's distinct sound caught my attention on the radio and I did just what the song suggested I do....take the long way home.