After the rest of the family sleeps...I have been sneaking away to the fly room and whipping out flies like a mad man!

One egg that I kinda like is this one........I mixed a Globug with an Estaz egg and this was the result! 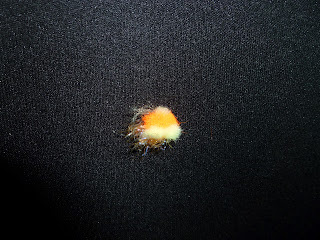 Next up, was my first attempt at a McTage's Leather Trouser Worm . I took the eyes from a torn up clouser minnow, a pink lead bead upfront, and a red hook I used for whacky rigging some StanX Stix 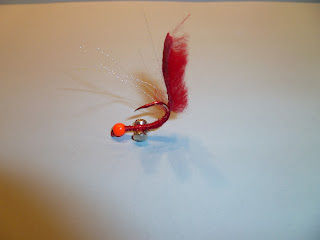 This actually turned out pretty good! I need some #8 scud hooks, not pink beads, and some bead chain for this thing to be perfect like the original.

Finally was my first attempt at a Replot Stinger. I forgot to order some schlappen feathers, so I took some hackle feathers that I had laying around instead. Mix that with some rabbit zonker strips instead of raccoon and you have my first version!
It turned out a bit different than the original, but I learned a lot from this tie! First, I need some schlappen feathers and they need to face inwards instead of outwards. Int he water, this thing looks like a killer frog pattern with kicking legs. I think I will tie this version in a couple of different colors for that exact reason. Also, I need some fur that is more bushier/longer than the rabbit zonker strips I was using. Simon's original has a lot more bushiness up front with the raccoon zonker strips. Raccoon seems to be hard to find here in the states and when you do, it's expensive!!